You are here: Home › history › Martin Luther – Iconic Figure of the Reformation 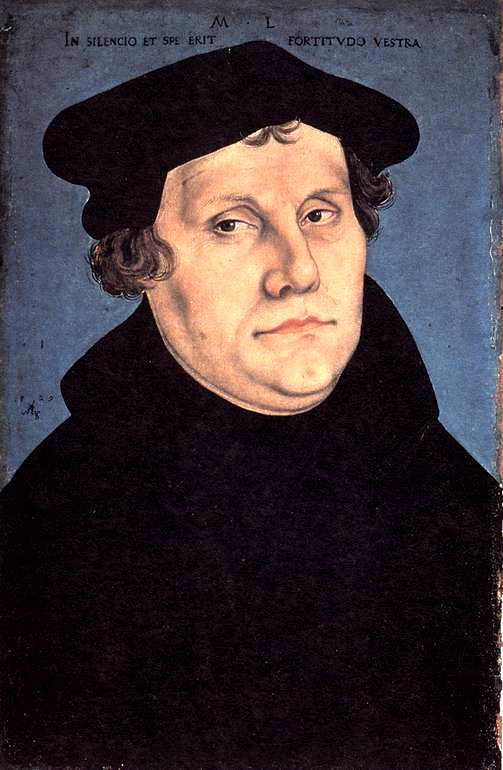 On November 10, 1483, Martin Luther, monk, priest, professor of theology and iconic figure of the Protestant Reformation was born.

“Be a sinner, and let your sins be strong (sin boldly), but let your trust in Christ be stronger, and rejoice in Christ who is the victor over sin, death, and the world”
— Martin Luther, from a letter

As eldest of seven children of Hans Luther and his wife Margarethe, two middle-class peasant laborers, Martin was baptized as a Catholic in the small village of Eisleben, Germany, then part of the Holy Roman Empire. The name was chosen because the child was baptized the next morning on the feast day of St. Martin of Tours. Hans Luther was ambitious for himself and his family, and he was determined to see Martin to get a proper education and to become a lawyer. Thus, he sent Martin to Latin school. As Latin school, the curriculum was focussed on the so-called classical “trivium”: grammar, rhetoric, and logic. Luther later compared his education there to purgatory and hell. By age 21 Martin Luther received a Master of Arts degree from the University of Erfurt.

Help! Saint Anna, I will become a monk!

In those times, it was mandatory before starting to study a real subject at university, you had to earn your Master of Arts first. Thus, in 1505 Martin began to study law following the expectations of his father. But later that year, while traveling through a terrible thunderstorm, Martin had an extraordinary experience that would change the course of his future. Fearing for his life when a lightening strike narrowly missed him, Martin cried out a vow to God. He cried out, “Help! Saint Anna, I will become a monk!” And so he did, to the strong disappointment of his parents. He left law school, sold his books, and entered a closed Augustinian friary in Erfurt on 17 July 1505.

Travel to Rome and First Doubts

Luther took the monastic life very seriously and excelled at it. Still terrified of the wrath of God, he confessed sin as often as 20 times a day, punished his body by sleeping on a cold concrete floor and performed his first mass with a trembling hand. At age 27, Luther was assigned to travel to the holy city of Rome to represent his monastery. The Church taught that by paying respect to relics of saints, one can earn religious merit that would shorten one’s time in purgatory. Although being a tremendous opportunity for the young monk, the trip proved to be a profoundly disappointing experience. Luther was shocked by the immorality, ignorance and flippancy of the Roman priests. Dutifully kissing each of Pilate’s stairs, he began to doubt the Church’s teachings about relics and merits, and returned home more troubled than ever.

The Just will live by Faith

In 1513, after having earned a doctorate in theology at the University of Wittenberg, during the lecture preparation for his students, Luther read two biblical passages that should again change his life. First, he read in the Psalms the words Christ had cried out on the cross: “My God, my God, why have you forsaken me?” Luther realized with amazement that the Divine Judge had once known the very desolation he was feeling. This new perspective offered some comfort. Then, almost two years later while preparing for a lecture on the book of Romans, he read “The just will live by faith.” Luther was struck by the power of the simple phrase. He meditated on its meaning for several days, and the full significance of the passage fully changed his life. No longer terrified of God or enslaved by the system of Catholic religious merits, Luther was finally able to rest in the knowledge that faith was all that was necessary to save him.

“When our Lord and Master Jesus Christ said, “Repent,” he willed the entire life of believers to be one of repentance.”
— Martin Luther, Thesis 1 (1517)

Indulgences – Rome’s “get out of sin” Cards

The doctrine of justification took shape in Luther’s thought between 1515 and 1519. The most famous of these is the controversy over indulgences. A person who committed a sin simply could buy an indulgence from the church to avoid punishment and in particular especially punishment after death in purgatory. An indulgence is basically some kind of “get out of sin” card, but not for free because you have to pay for it with money. Indulgences could be purchased either for oneself or on behalf of others, especially the deceased. In 1513 a great effort to distribute indulgences was proclaimed throughout Germany. This belief of the effectiveness of indulgences was encouraged by the church and especially the Dominican Johann Tetzel was one of their strongest promoters. He was sent to German by Pope Leo X, who is regarded by many as one of the most corrupt of the age, and became known for his catchy slogan “as soon as the coin in the coffer rings, the soul from purgatory springs.”

As a reaction on this, in 1517 Luther posted the famous Ninety-Five Theses for an academic debate on indulgences on the door of the castle church at Wittenberg. This was the customary time and place to display such an article. They were given widespread fame and called to the attention of both theologians and the public. The ’95 Theses of Contention’ spread throughout Germany, within two weeks, and Europe, in two months only. 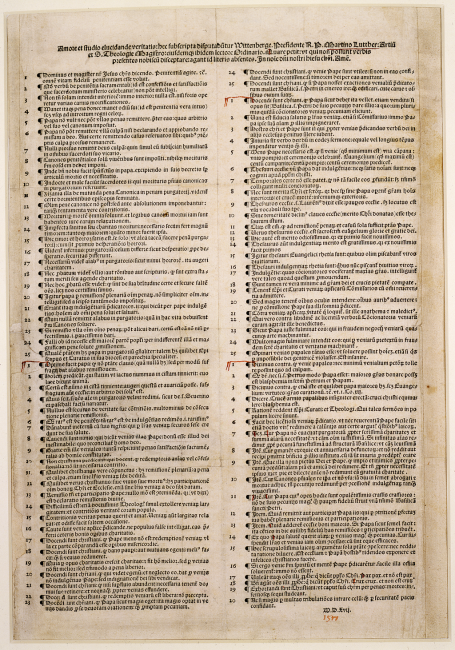 The Diet of Worms

This should be the start of the era of Protestant reformation. Luther believed that salvation is basically a divine gift, something which cannot be earned or even bought but which is nevertheless given because of God’s infinite love and mercy. Luther’s statements objected to what he regarded as a number of corruptions of the Church which had accumulated over the centuries. Martin Luther’s work raised great tumult in the country and as a result, his work was condemned as sacrilegious. Luther was given two choices – either to renounce them or reaffirm at the Diet of Worms on the April of 1521. When asked, in front of the assembly, if he stood by what was written in his works, Luther apologized for the harsh tone used in the writings. However, at the same time, he said that he would not decline the teachings in them. As a result, Martin Luther was declared an outlaw by the Emperor in his Edict of Worms, on May.

The German Translation of the Bible

On 4 May 1521 near Schloss Altenstein near Bad Liebenstein, the outlaw was captured by the knights Burkhard Hund von Wenkheim and Hans Sittich von Berlepsch, who kidnapped him and detained him at the Eisenach Wartburg Castle in order to prevent him from being killed. Luther remained incognito at the Wartburg until March 1522.  There he changed his appearance, his clothes and even his name as “Junker Jörg“. On Melanchthon‘s advice [5] he translated the New Testament into German in autumn 1521 in only eleven weeks.  As a model he used a copy of the Greek Bible of Erasmus of Rotterdam,[3] together with his own Latin translation and the Vulgate.  A first edition of the New Testament appeared in September 1522 (September Testament).  The first partial translation of the Old Testament appeared in 1523; both together had 22 authorized editions and 110 reprints by 1525, so that about one third of all Germans with reading knowledge possessed this book. Thus Luther made biblical contents accessible to the common people.

Charles N. M. Eire, Did Miracles Ever Cease? The Reformation and the Supernatural [6]