You are here: Home › geology › Baron Gerard de Geer and the Varves 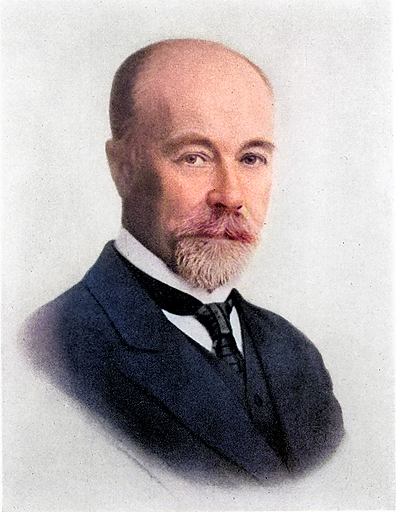 On October 2, 1858, Swedish geologist Gerard Jacob De Geer was born. De Geer made significant contributions to Quaternary geology, particularly geomorphology and geochronology. But, he is best known for his discovery of varves. A varve is a seasonal coarse-fine layer of clay deposited in still water.The layers were produced by the annual melt-water sequence and can be used as a chronological evidence.

Baron Gerard de Geer was born in Stockholm, Sweden into a family of politicians and industrialists. Both De Geer‘s father (Louis De Geer) and older brother were Prime Minister of Sweden, and De Geer himself was a member of the Swedish Parliament from 1900 to 1905. Gerard de Geer graduated from Uppsala University in 1879. He joined the wedish Geological Survey already in 1878 and began studying the late Quaternary deposits and landforms of southern Sweden. His early studies of raised beaches, used to reconstruct glacio-isostatic sea level changes, and his mapping of glacial moraines to reconstruct the extent of the last Scandinavian ice sheet and its pattern of deglaciation were well received. From 1882 De Geer worked as an assistant at the Swedish Geological Survey before being appointed geologist in 1885. In this function he discovered, among other things, a lime and kaolin deposit on the Ivö klack on the southern Swedish island of Ivö. De Geer has also made a name for himself as a cartographer of Spitsbergen. He organized and accompanied expeditions to the archipelago in 1882, 1896, 1899, 1901, 1908 and 1910.

During his fieldwork, De Geer noticed that the appearance of laminated sediments deposited in glacial lakes at the margin of the retreating Scandinavian ice sheet at the end of the last ice age, closely resembled tree-rings. His findings were published in 1940 in his best known work ‘Geochronologia Sueccia‘. In it, De Geer wrote “From the obvious similarity with the regular, annual rings of the trees I got at once the impression that both ought to be annual deposits“.

Baron Gerard de Geer‘s observation was indeed not new but he was the first geologist to exploit its potential application. He called these annual sedimentary layers varves and throughout the 1880s further developed his theory, publishing a brief outline of his discovery in 1882, which he followed with a presentation to the Swedish Geological Society in 1884. It was not until 1910, at the International Geological Congress, that De Geer‘s pioneering work reached the wider international scientific community. With this method (counting the band or warven clay layers) he proved in 1912 that the ice retreat in Scandinavia took place within 5000 years.

In 1915 De Geer matched, or ‘teleconnected”, varve curves from Sweden to varve curves from Finland and Norway. This first attempt at long-distance correlation marked the start of two decades travelling around the world by De Geer and his colleagues, searching out varve sequences for potential teleconnections. In 1920 De Geer travelled to North America with his wife and two assistants, Ernst Antevs and Ragnar Liden. Antevs remained in North America at the end of the trip, where he worked on the North American varve chronology. Further trips included Erik Norin’s visit to the Himalayas (1924–1925), Erik Nilsson’s visit to East Africa (1927–28), and Carl Caldenius’ visit to South America (1925–1929), and later to New Zealand (1932–34). However, by the mid-1930s De Geer’s teleconnections had become the subject of increasing criticism from his former student Ernst Antevs. Antevs correctly argued that the teleconnections were bad science, and that De Geer’s Trans-Atlantic correlations were inaccurate. De Geer felt his position was being caricatured and intentionally misunderstood by Antevs, but did little scientifically to rebuff the criticisms levelled at him.