You are here: Home › chemistry › Nicolas Lemery and the Acid-Base Chemistry

On November 17, 1647, French chemist Nicolas Lémery was born. Lemery was one of the first to develop theories on acid-base chemistry in a time which was often referred to as “the dawn of scientific chemistry” .

“Chemistry is the art which teaches the separation of different substances encountered in a mixture.”
— Nicolas Lemery (1675), Course on Chemistry

Nicolas Lemery was the fifth of seven children born in Rouen, France, to Julien Lemery, a Protestant attorney in the Parlement of Normandy. After being apprenticed to his uncle, a pharmacist in his native town Rouen, Lémery became a pupil of Christophe Glaser in Paris, then demonstrator in chemistry at the Jardin du Roi. But he found his master much imbued with the dreams of the alchemists and in 1670 Lémery registered as a student of pharmacy in Montpellier and was permitted to attend the courses given at the Faculty of Medicine.[1] Then after traveling through various parts of France took up his residence in Paris. By his lectures he gained a wide reputation which was much enhanced by the publication in 1675 of his “Cours de Chymie”, which in eighty years went through thirteen editions and was translated into Latin, German, Italian, Spanish and English.[2]

He next established a pharmacy in Paris, still continuing his lectures, but following 1683, being a Calvinist, he was obliged to retire to England. In the following year he returned to France, where he acquired an M.D. degree at the University of Caen in order to reestablish his professional status following the loss of his position as privileged apothecary. He continued his teaching in increasingly difficult circumstances until the revocation of the Edict of Nantes in 1685, when as a Protestant he lost all his professional and legal rights. Turning Catholic in 1686 was able to reopen his shop and resume his lectures. Lemery devoted the following years largely to pharmacy, publishing at the end of this period his Pharmacopée universelle (1699) and the Traité des drogues simples (1698).

From Pharmacy to Chemistry

In 1699 he was admitted to the reorganized Academy of Sciences as associate chemist, and succeeded Claude Bourdelin as chimiste pensionnaire. His subsequent scientific work was associated almost exclusively with the Academy, which resulted in the publication of several memoirs in the Academy’s journal, one of which offered a chemical and physical explanation of underground fires, earthquakes, lightning and thunder, and a monograph entitled Traité de l’antimoine (1707) on the results of his investigation into the properties and preparations of mineral antimony, which was first isolated by Vannoccio Biringuccio and described in 1540 [3]. He died in Paris on the 19th of June 1715.

A Corpuscular Theory of Acidity

Lemery did not concern himself much with theoretical speculations, but holding chemistry to be a demonstrative science, confined himself to the straightforward exposition of facts and experiments. In consequence, his lecture-room was thronged with people of all sorts, anxious to hear a man who shunned the barren obscurities of the alchemists, and did not regard the quest of the philosopher’s stone and the elixir of life as the sole end of his science. In 1680, using the corpuscular theory as a basis, Lemery stipulated that the acidity of any substance can be explained by the shapes to their constituent particles. Acid salts must have sharp pointed particles because of their sharp taste and, even more convincingly, because they solidify in the form of sharp pointed crystals, while alkalis were endowed with pores of various sizes. A molecule, according to this view, consisted of corpuscles united through a geometric locking of points and pores. For reaction to take place between a particular acid and alkali, there must be an appropriate relationship between the size of the acid spikes and alkaline pores. He furthermore discovered that heat is evolved when iron filings and sulphur are rubbed together to a paste with water, and the artificial volcan de Lemery was produced by burying underground a considerable quantity of this mixture, which he regarded as a potent agent in the causation of volcanic action. 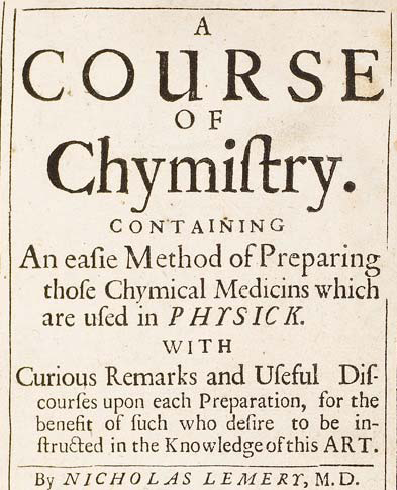 In 1675, Lémery published his work Cours de Chymie, which in the early editions presented chemistry as an auxiliary science to medicine, but later increasingly excluded this position and presented chemistry as a separate science of natural processes involved in the distillation, fermentation, and sublimation of plant, animal, and mineral substances. More than 30 editions of the work were published, 11 of which were revised by the author himself. He distinguished between vegetable, animal and mineral substances and saw 5 basic components: two passive (water, earth) and three active (Mercurius, Sulfur and Sal in the alchemical classification according to Paracelsus). These principles stood in the alchemical sense for more than the mere name indicates, for example Mercurius (mercury) for liquids such as alcohol (spirit), Sulfur (sulfur) for combustible, volatile such as oils.