You are here: Home › aviation › The X-43A and the Scramjet Technology 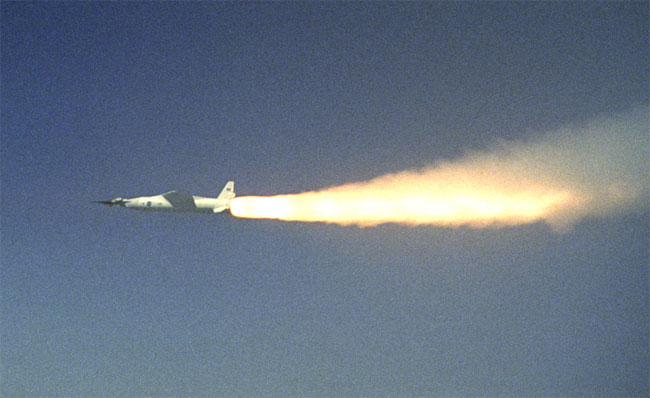 On November 16, 2004, the unmanned experimental hypersonic aircraft NASA X-43A set a new speed record of 10,617 km/h or Mach 9.65. With this flight the X-43A became the fastest free flying air-breathing aircraft in the world. The X-43A was propelled by a so-called scramjet, is a variant of a ramjet airbreathing jet engine in which combustion takes place in supersonic airflow.

After DARPA, in collaboration with Rockwell, unsuccessfully completed the X-30 NASP (National Aero Space Plane) project in 1993, NASA initiated development of the X-43A, an unmanned and hypersonic vehicle, seven years later with the “Hyper-X” program.NASA’s Hyper-X program, involving the American space agency and contractors such as Boeing, Micro Craft Inc, Orbital Sciences Corporation and General Applied Science Laboratory included the X-43 project as well. The Hyper-X Phase I project was conducted jointly by the Langley Research Center, Hampton, Virginia, and the Dryden Flight Research Center, Edwards, California. Langley was the lead center and is responsible for hypersonic technology development. Dryden was responsible for flight research.

The X-43A was relatively small with only 3.7 m legth and weighed roughly 1.300 kg. It was designed so that the body of the aircraft provides a significant amount of lift for flight, rather than relying on wings. The unmanned aircraft was designed to be completely controllable during its high-speed flight but not to land and be recovered. It is believed that all test vehicles crashed into the Pacific Ocean. A major problem the engineers had to solve during the design of X-43A was the heat produced at Mach speeds. It is possible that due to the compression shock waves involved in supersonic drag the heat can become so intense that metal portions of the airframe melt. The engineers tried to overcome this problem by cycling water behind the engine cowl and sidewall leading edges, cooling those surfaces.

The famous ramjet, or ‘scramjet‘ engine was designed so that external combustion takes place within air that is flowing at supersonic speeds. It is designed as an air-breathing jet engine in which the air supplied to the combustion chamber is not compressed by moving parts such as compressors, but solely by exploiting the high flow velocity of the gas itself in a fixed, narrowing inlet. Ramjets therefore cannot generate static thrust and function only above a minimum speed; depending on the exact design, often only at supersonic speed. For launch, mostly jettisonable auxiliary rockets (boosters) are used.Ramjets were described as early as the beginning of the 20th century by René Lorin, but they remain rare and have been used mainly in anti-aircraft missiles. The X-43A’s developers designed the aircraft’s airframe to be part of the propulsion system: the forebody is a part of the intake airflow, while the aft section functions as an exhaust nozzle. The engine was mainly fueled with hydrogen and scramjet-powered vehicles do not carry oxygen on board for fueling the engine. This way, the vehicle’s size and weight can be reduced significantly.

The first testflight for X-43A took place in 2001, but failed because the Pegasus booster lost control about 13 seconds after it was released from the carrier. The second test flight took place in March 2004. The Pegasus fired successfully and released the test vehicle at an altitude of about 29,000 m. After separation, the engine’s air intake was opened, the engine ignited, and the aircraft then accelerated away from the rocket reaching Mach 6.83. Fuel was flowing to the engine for 11 seconds, a time in which the aircraft traveled more than 24 km. Following Pegasus booster separation, the vehicle experienced a small drop in speed but the scramjet engine afterward accelerated the vehicle in climbing flight. With this flight the X-43A became the fastest free flying air-breathing aircraft in the world. The third and thus the last example of the Hyper-X 3 demonstrator was again able to reach a record speed of Mach 9.66 (10,617 km/h) and an altitude of 34 kilometers as early as November 16, 2004. The supersonic aircraft maintained the record speed for about ten seconds. The engine operated for about twelve seconds, after which the ramjet melted due to the lack of active cooling of the engine due to its design. It then performed preset flight maneuvers for a few minutes before crashing into the Pacific Ocean as planned.

After the end of the X-43 project, the U.S. Air Force continued its hypersonic research with the X-51A. The first flight took place on May 26, 2010.