You are here: Home › history › How Mosaic has Changed the World 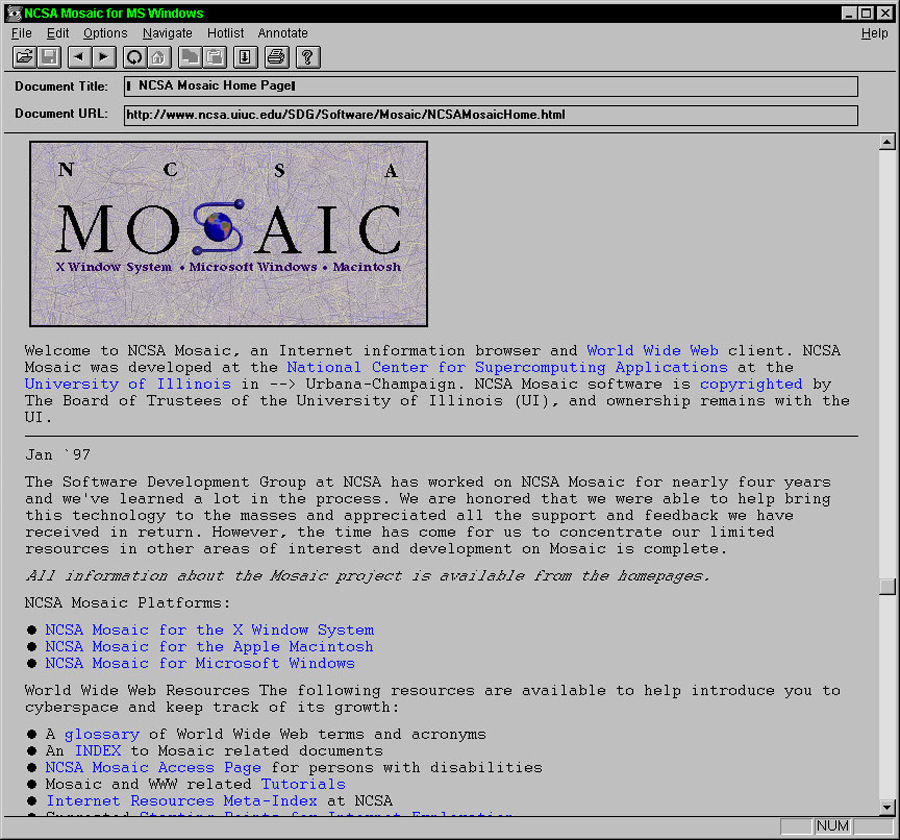 On April 22, 1993, version 1.0 of NCSA Mosaic, or simply Mosaic, was released, the web browser credited with popularizing the World Wide Web. It was the first Web browser as we know today with a graphical user interface enabling an interactive easy to use browsing experience. And without graphics the Web as we know it today would not exist. NCSA Mosaic was the web browser that led to the Internet boom of the 1990s.

First, there was Text

In the early days of the World Wide Web, there was a text-based browser called Lynx. I’m quite sure that only a few of you have heart about Lynx, but it is the oldest existing web browser still in use and in development since 1992, initiated by a few students from the University of Kansas. Browsing in Lynx consisted of highlighting the chosen link using cursor keys, or having all links on a page numbered and entering the chosen link’s number. It’s usage was intended for text terminals, but in the early 1990’s graphical user interfaces were on the rise, as e.g. workstations from Sun microsystems or even early Windows 3.1.

But Text is only Half the Fun

Browsing the Web with a text terminal is only half the fun, and the web would never have had its breakthrough without the ability of graphical browsing. It was the Mosaic web browser that should denote a turning point and popularize the web, being developed at the National Center for Supercomputing Applications (NCSA)at the University of Illinois Urbana-Champaign beginning in late 1992. The history of NSF’s supercomputing centers overlapped greatly with the worldwide rise of the personal computer and workstation. It was, therefore, not surprising that software developers focused on creating easy-to-use software tools for desktop machines. The NSF centers developed many tools for organizing, locating, and navigating through information, but perhaps the most spectacular success was the NCSA Mosaic, which in less than eighteen months after its introduction became the Internet “browser of choice” for over a million users, and set off an exponential growth in the number of decentralized information providers.

In 1992, Joseph Hardin and Dave Thompson worked at the NCSA and when they heard about Tim Berners-Lee‘s work on the WWW, they downloaded the ViolaWWW browser, and then demonstrated the web to NCSA’s Software Design Group by connecting to the web server at CERN over the Internet.[5,6] As expected, the group was impressed and on the suggestion of computer graphics expert Dr. Ping Fu, undergraduate student assistant Marc Andreessen and Unix specialist Eric Bina began work on a browser version for X-Windows on Unix computers, first to be released as version 0.5 on January 23, 1993. A final Version 1.0 was released on April 22, 1993, followed by two maintenance releases during summer 1993. A version of Mosaic for the Macintosh was developed by Aleks Totic and released a few months later, making Mosaic the first browser with cross-platform support, which besides its graphical user interface might be considered its most important breakthrough.

Marc Andreessen, the leader of the team that developed Mosaic, left NCSA and, with James H. Clark, one of the founders of Silicon Graphics, Inc. (SGI), and four other former students and staff of the University of Illinois, started Mosaic Communications Corporation, which eventually became Netscape Communications Corporation, producing the famous Netscape Navigator. In August, 1994, NCSA assigned all commercial rights to Mosaic to Spyglass, Inc. Spyglass subsequently licensed their technology to several other companies, including Microsoft for use in Internet Explorer. The NCSA stopped developing Mosaic in January 1997, since Netscape and Microsoft began to bring large development teams to bear on development of their own browsers.

Today, graphical web browsers are everywhere on our computers, tablets, smartphones or ebook readers. What’s coming next? Will a combination of graphical and auditive interface similar to Apple’s Siri succeed? What about 3D browsers or virtual reality browsers? Who knows…

Tim Berners-Lee: The next Web of open, linked data, [9]