You are here: Home › computer science › Robert Metcalfe and the Ethernet Technology 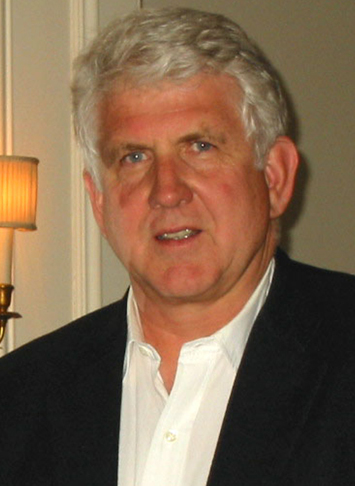 On May 22, 1973, Robert Metcalfe, by the time PhD student in electrical engineering working at Xerox PARC, wrote a memo describing a way to transmit data from the early generation of personal computers to a new device, the laser printer. He named the new network technology Ethernet after the disproven luminiferous ether as an “omnipresent, completely-passive medium for the propagation of electromagnetic waves“. Over time, Ethernet has largely replaced competing wired LAN technologies.

Metcalfe was born in 1946, in Brooklyn, NY. In 1964, Metcalfe graduated from Bay Shore High School. He graduated from MIT in 1969 with two B.S. degrees, one in Electrical Engineering and the other in Industrial Management from the MIT Sloan School of Management. He then went to Harvard for graduate school, earning his M.S. in 1970. While pursuing a doctorate in computer science, Metcalfe took a job with MIT’s Project MAC after Harvard refused to let him be responsible for connecting the school to the brand-new ARPAnet.[3] At MIT’s Project MAC, Metcalfe was responsible for building some of the hardware that would link MIT’s minicomputers with the ARPAnet. Metcalfe was so enamored with ARPAnet, he made it the topic of his doctoral dissertation.The first version wasn’t accepted. For a 1972 ARPANET conference he wrote an introductory pamphlet entitled Scenarios. The booklet included 19 scenarios for using the ARPANET, listed available resources at the various sites, and basic usage instructions.[1]

At Xerox PARC and AlohaNet

Robert Metcalfe had already accepted a job a Xerox’s Palo Alto Research Center (PARC). He was told to come take his job anyway and finish his doctoral work later. His inspiration for a new dissertation came while working at Xerox PARC when he read a paper about the ALOHA network, or Alohanet at the University of Hawaii. The Alohanet used radio waves instead of telephone wire to transmit data. The main problem with using radio waves as a medium was that if two packets were sent out at the same time on the same broadcast channel they would interfere with each other and effectively cut off the transmission. He identified and fixed some of the bugs in the AlohaNet model and made his analysis part of a revised thesis, which finally earned him his Harvard PhD in 1973. The Alohanet designers implemented a method called random access. Computers in the network were allowed to transmit whenever they had data to send. Data was send in data packets. The sender then waited to receive confirmation from the destination computer that the packets arrived. If packets collided and no confirmation was received, the sender will wait for a random (but very short) period of time and retransmit. Metcalfe’s key improvement was to vary the random interval for re-transmission based on traffic load, which significantly improved efficiency by limiting the number of repeat collisions. [1]

The Invention of Ethernet

Metcalfe was working at Xerox PARC in 1973 when he and David Boggs invented Ethernet, initially a standard for connecting computers over short distances. He was given the task of designing a way to connect Xerox’s new personal computers, the Altos, to each other. Metcalfe identifies the day Ethernet was born as May 22, 1973, the day he circulated a memo titled “Alto Ethernet” which contained a rough schematic of how it would work. That is the first time Ethernet appears as a word, as does the idea of using coax as ether. Metcalfe named it after the disproven luminiferous ether as an “omnipresent, completely-passive medium for the propagation of electromagnetic waves“. Like in Alohanet, computers connected in the Ethernet might send messages organized as data packets whenever they want to. The connected computers share all a single wire, the “ether“. But the wire is used as a broadcast medium like radio waves are send over space. To avoid or minimize possible collisions of packets on the single shared “ether“, a so-called exponential back-off mechanism increases the time that a computer has to wait  to resend a data packet after a collision. Metcalfe’s colleague Boggs identifies another date as the birth of Ethernet: November 11, 1973, the first day the system actually functioned. 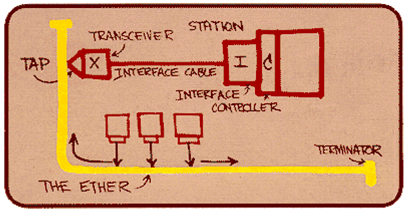 “The diagram … was drawn by Dr. Robert M. Metcalfe in 1976 to present Ethernet … to the National Computer Conference in June of that year. On the drawing are the original terms for describing Ethernet. Since then other terms have come into usage among Ethernet enthusiasts.”

In 1975, Xerox filed a patent application listing Metcalfe, David Boggs, Chuck Thacker, and Butler Lampson as inventors. In 1976, Metcalfe moved to Xerox’s Systems Development Division to manage microprocessor and communication developments. While at PARC he began eight years of part-time teaching at Stanford University, finishing as a consulting Associate Professor of Electrical Engineering with a new course on distributed computing. In 1979, Metcalfe departed PARC and founded 3Com, a manufacturer of computer networking equipment.

In 1980 he received the Association for Computing Machinery Grace Murray Hopper Award for his contributions to the development of local networks, specifically Ethernet. Metcalfe retired from 3Com in 1990. He was editor of InfoWorld magazine for ten years. In 1995, he was elected to the American Academy of Arts and Sciences. In 2003, he received the National Medal of Technology for the invention of Ethernet.

Metcalfe’s Law is a rule of thumb about the cost-benefit ratio of communication systems. It assumes that the benefits of a communications system grow in proportion to the number of possible connections between subscribers (i.e., roughly the square of the number of subscribers), while the costs grow only in proportion to the number of subscribers themselves. The result is that for any network above a certain size, the benefits exceed the costs. The mathematically simple object of consideration was first expressed by Robert Metcalfe in 1980. His consideration, which he himself never called a law nor published, remained unpublished until the publication of Metcalfe’s Law and Legacy by George Gilder in 1993.[8] Metcalfe’s Law, as it has been called since then, explains many of the networking effects of communication technologies such as the Internet or Usenet, but in principle rather than in quantity. It can also be illustrated by the use of fax machines: a single fax machine is useless. But with each additional device in the network, the possibilities for interaction increase as the number of possible faxes received and sent increases.

Now an international computer industry standard, Ethernet is by far the most widely installed LAN, with connected computers numbering 50 million.[2] Over the course of its history, Ethernet data transfer rates have been increased from the original 3 megabits per second (Mbit/s) to the latest 400 gigabits per second.[9]