You are here: Home › communication › SPAM Rules the Internet 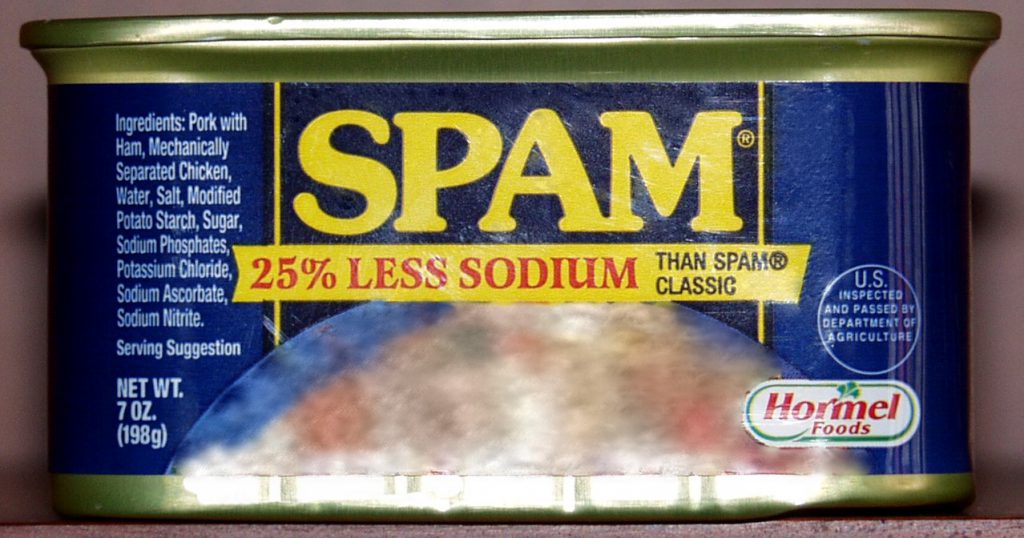 On May 3, 1978, the earliest documented spam (although the term had not yet been coined) was sent as a message advertising the availability of a new model of Digital Equipment Corporation computers sent by Gary Thuerk to 393 recipients on ARPANET.

Today, spam has become a global issue that is not only restricted to email. There is spam in instant messaging, newsgroups, social networks, mobile phones, online gaming, search engines, blogs, wikis, video platforms, etc. Spam is simply everywhere in the internet. Spam is not only annoying, spam can also be dangerous, because it can be used to spread computer viruses, trojan horses or other malicious software. Have you ever wondered, where the word comes from? Well here’s the story.

According to the Internet Society and other sources, the term spam is derived from the 1970 Spam sketch of the BBC television comedy series Monty Python’s Flying Circus.[2] The sketch is set in a cafe where nearly every item on the menu includes Spam canned luncheon meat. As the waiter recites the Spam-filled menu, a chorus of Viking patrons drowns out all conversations with a song repeating “Spam, Spam, Spam, Spam… lovely Spam! wonderful Spam!“, hence “Spamming” the dialogue.

Spam is a canned precooked meat product made by the Hormel Foods Corporation, first introduced in 1937. While most people assume spam is short for “spiced ham,” only a handful of people know its true origin. The name was actually suggested in naming contest by Ken Daigneau, a Hormel VP’s brother, before the product was introduced in 1937. Daigneau won a naming contest and $100. Other theories include “special processed American meat” and “shoulders of pork and ham.”

According to Brad Templeton, founder of ClariNet Communication Corporation, the first business on the Internet, the first email spam was sent out to all users on ARPANET, which had only several hundreds of users by the time. It was an ad for a presentation by Digital Equipment Corporation sent out by Gary Thuerk. Rather than send a separate message to each person, which was the standard practice at the time, he had an assistant, Carl Gartley, write a single mass email. Reaction from the net community was fiercely negative, but the spam did generate some sales – and a new business method was born. It was not until 1993 that a USENET posting was called “spam.” In an attempt to implement a retro-moderation system that allowed posts to be deleted after they had been posted, Richard Depew accidentally created a monster. His software, ARMM, had a bug in it which caused it to post 200 messages to the newsgroup news.admin.policy. Readers of this group were making jokes about the accident, one person referring to the incident as “spamming.” Thus, spam received its name.

The first major commercial spam incident started on March 5, 1994, when a husband and wife team of lawyers, Laurence Canter and Martha Siegel, began using bulk Usenet posting to advertise immigration law services. The incident was commonly termed the “Green Card spam“, after the subject line of the postings. Defiant in the face of widespread condemnation, the attorneys claimed their detractors were hypocrites and a that they had a free speech right to send unwanted commercial messages.

Spam continues simply because it seems to work. According to a Commtouch report in the first quarter of 2010, there are 183 billion spam messages sent every day. More than 97% of all emails sent over the net are unwanted, according to a Microsoft security report. The most popular spam topic is “pharmacy ads” which make up 81% of email spam messages, followed by replicas, enhancers, phishing emails, university degrees, and online casinos. Advance fee fraud spam such as the “Nigerian connection” may be sent by a single individual from a cyber cafe in a developing country. Organized “spam gangs” operate from sites set up by the Russian mafia, including turf battles and revenge killings. Spam is also a medium for fraudsters to scam users into entering personal information on fake Web sites using emails forged to look like they are from banks or other organizations, such as PayPal. This is known as phishing. Targeted phishing, where known information about the recipient is used to create forged emails, is known as spear-phishing.

Spamming is illegal. Sending spam violates the Acceptable use policy (AUP) of almost all Internet service providers. All the countries of the European Union have passed laws that specifically target spam. Today, every user can take measures against spam by setting up a spam filter. Today’s spam filters are often based on probabilistic techniques such as naive Bayes filtering. Bayesian filters rely on word probabilities. If a message contains many words that are used only in spam, and few that are never used in spam, it is likely to be spam. But, it has become a rat race. Spam provider are constantly weakening Bayesian filters by include lines of irrelevant, random words in their spam messages, a technique known as Bayesian poisoning. Thus, despite having switched on a spam filter that learns with every email I mark as spam, more than 50% of my daily email messages are still spam. Sometimes, I am afraid, where this might end…