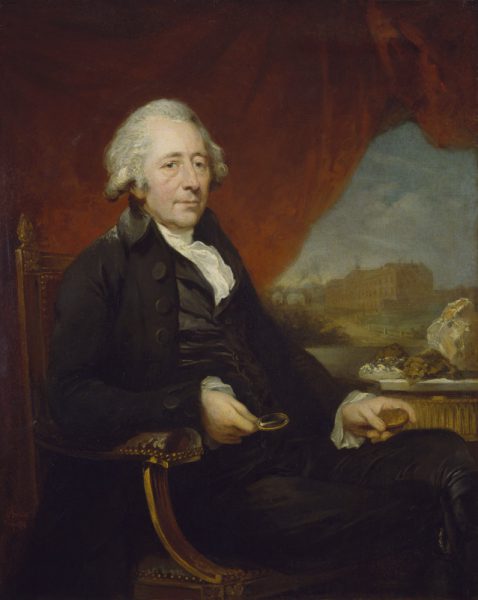 On August 17, 1809, English manufacturer Matthew Boulton passed away. Boulton financed and introduced James Watt‘s steam engine. The partnership installed hundreds of Boulton & Watt steam engines, which were a great advance on the state of the art, making possible the mechanisation of factories and mills. Boulton applied modern techniques to the minting of coins, striking millions of pieces for Britain and other countries, and supplying the Royal Mint with up-to-date equipment.

“I sell here, Sir, what all the world desires to have-power.”
– Matthew Boulton, speaking to Boswell of his engineering works, in James Boswell ‘The Life of Samuel Johnson’

The Son of a Toy Maker

Matthew Boulton was born in Birmingham on 14th September 1728, the son of Matthew Boulton, a silver-stamper and toy maker. He was educated at the Nonconformist academy run by John Hausted in Deritend and joined the family business on leaving school. The company was a maker of toys, this was the general name for small metal goods such as “gold and silver toys produced trinkets, snuff-boxes, inkstands… and steel toys, chiefly buckles for both shoes and knee-breeches”. At the age of twenty-one he became a partner in his father’s business. [2] In 1756 Boulton married a distant cousin, Mary Robinson, who inherited a considerable fortune from her parents. When she died in 1760 and after the death of his father, Boulton took full control of the family toymaking business. He decided to use his new wealth to expand his business and in 1762 he built the Soho manufactory near Birmingham. The factory produced small metal articles such as gilt and silver buttons and buckles, Sheffield plate, and a variety of other items. Boulton also formed a partnership with John Fothergill, who could speak French and German and had good contacts in Europe [2,3]. Boulton also became friends Josiah Wedgwood, who ran his own business at Burslem, which whom he formed a business partnership.

Also in 1768 Boulton made the acquaintance of James Watt.[4] Boulton’s Soho site proved to have insufficient hydropower for his needs, especially in the summer when the millstream’s flow was greatly reduced. He realised that using a steam engine either to pump water back up to the millpond or to drive equipment directly would help to provide the necessary power. After receiving the patent in 1769, James Watt did little to develop the steam engine into a marketable invention, turning to other work. In 1772, Watt’s partner, the industrialist Dr. John Roebuck, ran into financial difficulties. When the Roebuck went bankrupt, Boulton accepted Roebuck’s share in Watt’s first steam-engine patent as repayment of a debt. But Boulton’s share was worth little without Watt’s efforts to improve his invention. At the time, the principal use of steam engines was to pump water out of mines. The engine commonly in use was the Newcomen steam engine,[7] which consumed large amounts of coal and, as mines became deeper, proved incapable of keeping them clear of water. Watt’s work was well known, and a number of mines that needed engines put off purchasing them in the hope that Watt would soon market his invention. 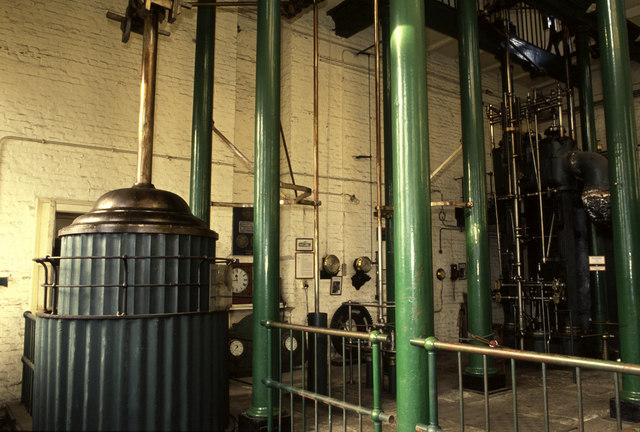 In 1775 Boulton and Watt became partners in the steam-engine business. By that time six of the 14 years of Watt’s original patent had elapsed, but thanks to Boulton’s lobbying Parliament passed an act extending Watt’s patent until 1800. Boulton and Watt began work improving the engine. With the assistance of iron master John Wilkinson they succeeded in making the engine commercially viable. Watt continued to experiment and in 1781 he produced a rotary-motion steam engine. Whereas his earlier machine, with its up-and-down pumping action, was ideal for draining mines, this new steam engine could be used to drive many different types of machinery. Richard Arkwright was quick to importance of this new invention, and in 1783 he began using Watt’s steam-engine in his textile factories. Others followed his lead and after fifteen years there were over 500 of Boulton & Watt’s machines in Britain’s mines and factories.[3] In 1785 both Boulton and Watt were elected as Fellows of the Royal Society.

In 1786 Boulton applied steam power to coining machines. The main issue with coinage was the machinery used by the Royal Mint to make coins. This needed four workmen to operate it which invariably meant each coin was struck slightly differently, some better than others and not all perfectly round, which made it easier for forgers. Boulton spotted an opportunity to literally make money and set up his own mint in 1789. It replaced the workmen with steam power, producing a machine which struck coins perfectly each time, producing a regular coinage.[5] So successful was the process that as well as his supplying the home market, he produced coins for foreign governments as well.