You are here: Home › engineering › How the Radio became a Mass Medium – The Volksempfänger VE301 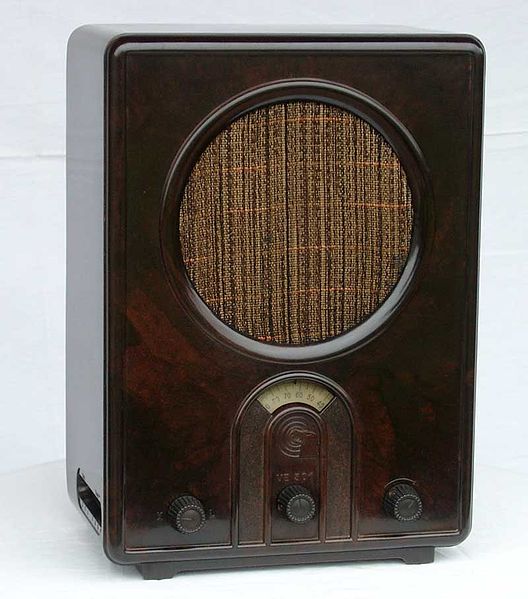 On August 18, 1933, the original Volksempfänger VE 301 was presented at the 10. Große Deutsche Funkausstellung in Berlin. The purpose of the Volksempfänger-program was to make radio reception technology affordable to the general public. Nazi Propagandaminister Joseph Goebbels realized the great propaganda potential of this relatively new medium and thus considered widespread availability of receivers highly important.

The first model, the Volksempfänger VE301 was developed by the company Dr. G. Seibt based in Berlin, Germany. It was presented at the 10. Internationale Funkausstellung Berlin on August 18, 1933. The device’s case was made of Bakelite [3] and it was designed by Walter Maria Kersting. Back then, all larger radio manufacturers had to produce their devices based on the government’s standards and prices. In the beginning of the VE 301 only German and Austrian stations were marked while foreign stations could be received after dark with an external antenna, particularly as stations such as the BBC European service increased transmission power during the course of the war.

The VE 301 became one of the few propaganda projects that was produced in a series, others included the KdF-Wagen, the Einheitsempfänger and the Volkskühlschrank (a fridge). The low price of the VE 301 should ensure anyone to listen to the NS-Propaganda. The name VE 301 was based on the abbreviation for Volksempfänger as well as 301 as a reminder on January 30, 1933 – day day of Adolf Hitler’s rise to power.

Technology for the Masses

Depending on the type, the popular receivers are designed for mains operation with alternating current, direct current or as combined devices, the so-called all-current devices. There were also some variants for battery operation. The popular receiver of the VE301W model was equipped with three tubes. The loudspeaker was a high-impedance cantilever with good efficiency but moderate sound. The people’s receivers are considered typical representatives of the single-circuit receivers from the family of straight-ahead receivers. The popular receivers replaced the simple detector receivers with individual headphone reception, which were still very widespread at the time. Only a few years after the Second World War were most popular receivers replaced by the more powerful superimposed receivers and the emerging low interference VHF radio and later by new transistor devices.

Hitler’s architect and Minister for Armaments and War Production, Albert Speer, said in his final speech at the Nuremberg trials about the Volksempfänger:

“Hitler’s dictatorship differed in one fundamental point from all its predecessors in history. His was the first dictatorship in the present period of modern technical development, a dictatorship which made the complete use of all technical means for domination of its own country. Through technical devices like the radio and loudspeaker, 80 million people were deprived of independent thought. It was thereby possible to subject them to the will of one man“.