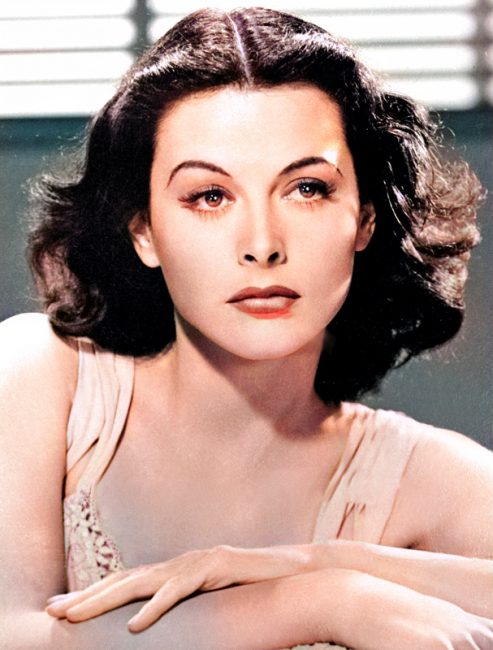 On November 9, 1913, Hollywood movie star Hedy Lamarr was born, co-inventor of an early form of the spread spectrum communication and frequency hopping, necessary for wireless communication from the pre-computer age to the present day.

Ok, I assume that you are not necessarily familiar with spread spectrum communications technology. But, maybe you are wondering even more about a movie star diva of Hollywood’s Golden Age, who should be responsible for the development of this kind of advanced technology… and even more so already in the early 1940s. Well, Hedy Lamarr really was an extraordinary woman. She was born as Hedwig Eva Maria Kiesler in Vienna, Austria, into a well of Jewish family as a beloved only child. Her mother, Gertrud Lichtwitz, was a renowned Hungarian pianist and her father, Emil Kiesler, a successful bank director. She attended a private school, received piano, ballet and language lessons. Already at the age of 16 she started a successful career in acting.

The Most Beautiful Woman in the World

The famous director Max Reinhardt casted her in Berlin in the play ‘The Weaker Sex‘ and called her “the most beautiful woman in the world”. In 1933 Lamarr performed in the Czech art film ‘Ecstasy‘, a film that became notorious for Lamarr’s face in the throes of orgasm filmed in close-up and her full nudity in some scenes. The film was therefore banned in National Socialist Germany. It was not until 1935, after cuts by the Nazis, that the film was shown under tumultuous conditions in a few German cinemas, with the warning: “This film is spoiling young people“.

At age 19 Lamarr gave up her career for what seemed at first a fairy-tale existence and married Friedrich Mandl, a man 13 years her senior, one of the richest men in Austria and a munitions manufacturer mogul with close connections to Italian fascist leader Benito Mussolini. Mandl was described to be extremely controlling, preventing Hedy from pursuing her acting career and keeping her a virtual prisoner in his mansions. On the other hand, Mandl threw glittering dinner parties where generals and scientists – as munition manufacturer his so-called brothers-in-arms – entertained the child bride by bragging about their advances in missile technology.

From Austria to Hollywood

A few years later in 1937 Lamarr’s marriage to Mandl became insupportable for her and she fled Europe for the US on the Normandie liner, where on board, she already began negotiations with Hollywood producer Louis B. Mayer of the Metro-Goldwyn-Mayer studio, who had signed Swedish actress Greta Garbo several years earlier and right now was on the lookout for exotic European talent. In Hollywood, Hedy Lamarr soon became invariably cast as the archetypical glamorous seductress of exotic origins and played with the era’s most popular leading men such as Clark Gable, Spencer Tracy, or Charles Boyer.

Although Lamarr had no formal training and was primarily self-taught, she worked in her spare time on various hobbies and inventions, which included an improved traffic stoplight and a tablet that would dissolve in water to create a carbonated drink. Three years after her arrival in Hollywood, as German torpedoes downed boats in the North Atlantic during the first phase of World War 2, Lamarr remembered every ballistic boast she’d absorbed around her husband’s table and put her memories and mathematical talent to work. She came up with the idea of a robust radio communication schema, later called spread spectrum and frequency hopping. In general, the idea was not only to use a single small band frequency for communication as e.g. for radio controlled torpedos, but to spread the radio signal over a broad spectrum and to switch between the various frequencies of the spectrum in an almost random order to prevent detection as well as jamming.

Selling Kisses instead of Guiding Torpedos

In her work she was supported by avant garde composer George Antheil, a son of German immigrants and neighbor of Lamarr, who had already experimented with automated control of musical instruments. Lamarr told her idea to Antheil and together they submitted a sketch of a secret communication system in June 1941 to the US military resulting in the grant of US Patent 2,292,387 in 1942. This early version of frequency hopping used a piano roll to change between 88 frequencies and was intended to make radio-guided torpedoes harder for enemies to detect or jam. Although a presentation of the technique was soon made to the U.S. Navy, it met with opposition and was not adopted. Due to its complexity, Lamarr’s invention was never used in its original form. Although Lamarr wanted to continue working at the National Inventors Council, back in Hollywood like many other movie stars she was persuaded to raise money for war bonds, selling kisses for $50,000 a smack.

The technology was first implemented in an improved version on naval ships during the Cuban Missile Crisis in the 1960s and subsequently emerged in numerous military applications. But most importantly, the “spread spectrum” technology that Lamarr helped to invent should foster the digital communications boom, forming the technical backbone that makes cellular phones, fax machines, and other wireless technologies such as Bluetooth or Wi-Fi possible. In 1997, more than 50 years and five marriages later, Lamarr was recently given the EFF (Electronic Frontier Foundation) Award for their invention. Antheil, who already died in 1959 was also honored. The award was accepted by Hedy’s son accepted for her since she no longer made public appearances, but from her home in Florida she commented “It’s about time.“

The actress was married six times, beside it she had numerous affairs, also with women. 11 Her husbands were Fritz Mandl, Gene Markey, Sir John Loder, Teddy Stauffer, W. Howard Lee as well as Lewis J. Boles. She had three children. In 1965, a shoplifting charge was filed against her in Los Angeles because she was detained for a short time until the charges against her for petty larceny were dropped. Her autobiography Ecstasy and Me was published in 1967. Shortly after the publication, Lamarr sued the co-author for a large sum of damages for distorting the facts. Lamarr spent the last decades of her life withdrawn in Florida.

Maths-Chat: Hedy Lamarr – the unbelievable prehistory of the spread-spectrum communication, [6]