You are here: Home › biology › Marthe Louise Vogt and the Role of Neurotransmitters in the Human Brain 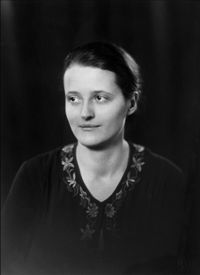 On September 8, 1903, German neuroscientist Marthe Louise Vogt was born. She is considered one of the important neuroscientists of the 20th century and is mainly remembered for her important contributions to the understanding of the role of neurotransmitters in the brain, especially epinephrine.

Marthe Vogt was the older of two daughters of Oskar Vogt and Cécile Vogt, both doctors and brain researchers. In 1903, her parents worked in the Neurobiology Laboratory at Berlin’s Friedrich Wilhelm University, later Humboldt University, which was headed by Oskar Vogt and which was merged in 1914 with the Kaiser Wilhelm Institute for Brain Research in Berlin-Buch, later to become the Max Planck Institute for Brain Research in Frankfurt am Main, again headed by Oskar Vogt. Marthe Vogt began studying medicine and chemistry at the Friedrich-Wilhelms-University in 1922 after her Abitur.[2] Among her teachers who influenced her to work on medical questions with the help of chemistry were Wilhelm Schlenk and Friedrich Adolf Paneth. After completing her medical studies in 1927 and a practical year, which she spent in equal parts in her father’s hospital and laboratory, she received her doctorate in medicine on 9 May 1928 with her research on the microscopical anatomy of the human brain. Under Carl Neuberg, Marthe Vogt earned a D.Phil in chemistry for her research in biochemistry on carbohydrate metabolism at the Kaiser Wilhelm Institut für Biochemie.

Research on the Central Nervous System

Marthe Vogt started working at the Institute of Pharmacology in Berlin under Paul Trendelenburg. There, she also met Edith Bülbring and Wilhelm Feldberg and learned about endocrinology and used experimental techniques in pharmacological analysis. Vogt managed to establish a reputation as one of Germany’s leading pharmacologists by the early 1930s, also, Marthe Vogt was appointed head of the chemical division at the Kaiser Wilhelm Institut für Hirnforschung (“Brain Science”) when she was only 28 years old. In general, Vogt’s research work focused on the central nervous system and the effects of various drugs on the brain at the time.

Emigration to the UK

Times changed when the Nazi Party in Germany increased its influence. Oskar Vogt’s anti-national-socialist stance led to his dismissal by the Reich Minister of Science, Art and National Education Bernhard Rust. Marthe Vogt along with further German scientists including Edith Bulbring decided to move to Britain and arrived on a Rockefeller Travelling Fellowship in England in 1935. She joined the British Pharmacological Society and began work with Sir Henry Dale at the National Institute for Medical Research in London. One of Vogt’s most important contributions was a coauthored paper with Sir Henry Dale and Wilhelm Feldberg entitled ‘Release of Acetylcholine at Voluntary Motor Nerve Endings‘ which was published in 1936. During her time in Hampstead, she proved, together with Dale and Feldberg, that acetylcholine is not only, as has been known since Otto Loewi, a neurotransmitter in the autonomic nervous system, but also the neurotransmitter from the motor neurons to the skeletal muscle. In 1936, while Marthe Vogt was working with him, Dale was awarded the Nobel Prize in Physiology or Medicine together with Otto Loewi; both were awarded for their discoveries of neurotransmitters.

A Category A Enemy Alien

As Dale was awarded the Nobel Prize for Physiology or Medicine for the work described in this paper, Feldberg and Vogt were credited in his lecture. Even though she successfully continued her research during the war, its politics started to threaten her career. After an investigation by British intelligence services in 1940, she was categorized as a category A enemy alien. It is believed that Nazi officials would not accept her resignation from a permanent appointment when she left Germany. Vogt was brought before a tribunal which ruled for her immediate internment, but fortunately, her colleagues and friends rallied to her aid and an appeal was granted, freeing her to continue her work at Cambridge, where she remained for five years.

In 1946 John Henry Gaddum at the Department of Pharmacology in Edinburgh gave Marthe Vogt the opportunity to set up her own research group.In 1948, she published an influential paper with William Feldberg which provided the first known evidence for the role of acetylcholine as a neurotransmitter and demonstrated the regional distribution of cholinergic systems in the brain. In 1954, Marthe Vogt now in Edinburgh proved that the catecholamines noradrenaline and adrenaline in the brain are not only neurotransmitters in the wall of the brain blood vessels, but neurotransmitters in neurons of the brain itself. With acetylcholine, noradrenaline and adrenaline were the first transmitter substances of the brain ever identified. Without Marthe Vogt’s discoveries, for example, the effects of muscle relaxants and psychotropic drugs could not be explained. Studies on neurotransmitter disorders in schizophrenia or severe depression are also based on this discovery.

Marthe Vogt was elected a member of the British Royal Society in 1952 and received the the Queen’s Medal in 1981. In 1974 she received the Schmiedeberg Plaque of the German Pharmacological Society. Edinburgh and Cambridge awarded her honorary doctorates. She was also a member of the American Academy of Arts and Sciences (since 1977) and the Hungarian Academy of Sciences. From 1960 to 1966 she headed the Pharmacology Department of the Agricultural Research Council Institute of Animal Physiology in Babraham near Cambridge. There she remained in retirement until 1990, when her vision deteriorated and she moved to La Jolla, California, to live with her sister Marguerite, ten years younger than her. Marte Vogt died on September 9, 2003, at age 100.