You are here: Home › physics › The Fairy Tale Collections of Ludwig Bechstein 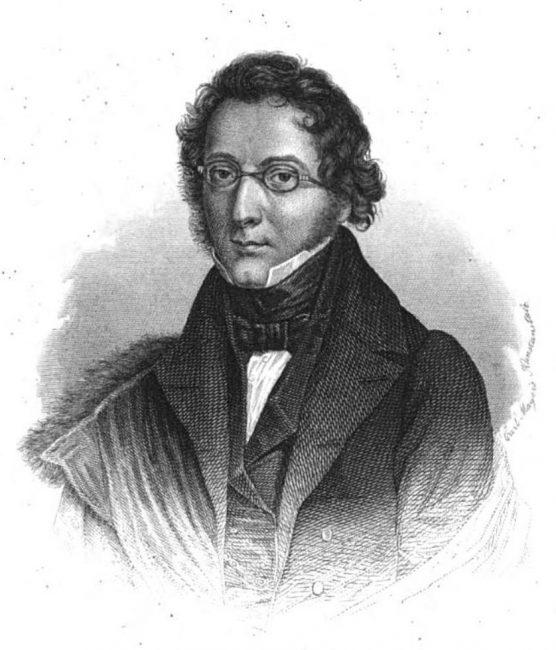 On November 24, 1801, German Writer, librarian, archivist and pharmacist Ludwig Bechstein was born. A collector of fairy tales, he is best known today for his edition of collected Fairy Tales.

“The main thing is that everyone should fulfill his duty, enjoy life beautifully – and if he is a poet by God’s grace, delight and benefit.”
– Ludwig Bechstein, Letter to Ludwig Storch, April 9, 1830

Ludwig Bechstein was born in Weimar, Grand Duchy of Saxe-Weimar-Eisenach, the illegitimate son of Johanna Carolina Dorothea Bechstein and a French emigrant under the name Louis Dupontreau. In 1810, his uncle Johann Matthäus Bechstein adopted him. Since then he bore the name Ludwig Bechstein. His uncle enabled him to attend the Gymnasium in Meiningen and from 1818 to 1821 to serve an apprenticeship as a pharmacist in Arnstadt, where he then worked as an assistant until 1824. As early as 1823, he presented the Thuringian folk tales as C. Bechstein. He then worked as a pharmacist’s assistant in Meiningen until 1826 and as a provisor at the Schwan pharmacy in Salzungen until 1828. However, this activity did not satisfy him professionally.

Duke Bernhard II of Saxe-Meiningen granted Bechstein a scholarship to study philosophy, history and literature. He began his studies in 1829 in Leipzig, where he joined the Burschenschaft that same year, and continued in Munich in 1830. In 1831 Bechstein was appointed ducal cabinet librarian in Meiningen and in 1833 head of the ducal public library. In 1832 he founded the Hennebergischer altertumsforschender Verein (Hennebergian association for the study of antiquity), which he presided over as director until 1857. In 1834, Ludwig Bechstein published the “Chronicle of the City of Meiningen 1676-1834“. In 1840 he was awarded the title of court councilor and moved into his own house in Halbestadtstraße. In 1842 he joined the Meiningen Masonic Lodge Charlotte zu den drei Nelken. In 1848, Bechstein took over as head and archivist of the Community Archives of Henneberg.

Bechstein’s patriotic poetry and his historical stories and novels such as Der Dunkelgraf (The Dark Count) are hardly known today. What remains are his collections of fairy tales, published under the title Deutsches Märchenbuch (German Fairy Tale Book, 1845), among others. With the aim of having an educational effect, he often made changes to the stories that had been handed down. The book was even more popular than the Brothers Grimm‘s collection when it was first published [7]. His collection of folk poetry was also intended as a contribution to the promotion of German national unity. Bechstein’s preface to the 1845 edition gives a delineation of the terms fairy tale, saga, legend, and mythe, the latter of which he excluded from this collection. He had found his sources in old writings and oral tradition, but also accepted help in revising them. In the first edition of 1845, the fairy tales were provided with short introductory notes on their origin

Bechstein also collected sagas. His extensive Deutsches Sagenbuch (German book of legends, 1853) did not become as popular as his collection of fairy tales, but it is still used today as a compendium of German sagas. Bechstein’s publications about Thuringia also experienced repeated reissues, for example, his volume in the series Das malerische und romantische Deutschland (The picturesque and romantic Germany). With the biography about his adoptive father, Dr. Johann Matthäus Bechstein and the forestry academy Dreißigacker. A Double Monument of Ludwig Bechstein, he created the first independent biography of a German forester in book form in 1855. Bechstein intended to complete his collection of folk poetry with the volume Deutsches Mythenbuch (German Book of Myths), but his early death prevented this project.

Bechstein was married twice. In 1832, he married Caroline Wiskemann (1808-1834) from Oechsen. The only child of this marriage was their son Reinhold Bechstein, who later became a philologist and Germanist. After only two years of marriage, Caroline died. In 1836, Bechstein married his second wife Therese Schulz (* April 7, 1806; † February 26, 1876) from Untermaßfeld. This marriage produced seven children, including Adolf Emil Ludwig Bechstein (1843-1914), a well-known draftsman and illustrator of his time. Ludwig Bechstein died on May 14, 1860, in Meiningen.