You are here: Home › physics › Louis de Broglie and wave nature of matter 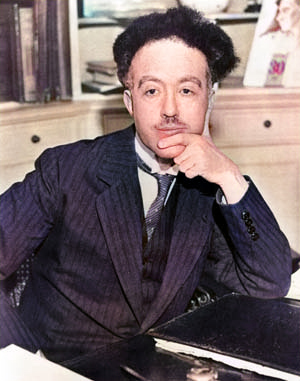 On August 15, 1892, French physicist and Nobel Laureate Louis de Broglie was born. He is best known for making groundbreaking contributions to quantum theory. He postulated the wave nature of electrons and suggested that all matter has wave properties. This concept is known as wave-particle duality or the de Broglie hypothesis.

Louis de Broglie attended the Lycée Janson of Sailly and decided to continue his studies in literature, but then earned his degree in history in 1910. The scientist earned his degree in medicine three years later and was then conscripted for military service and posted to the wireless section of the army. He was stationed at the Eiffel Tower. When World War I was over, de Broglie spent another four years studying physics. He was especially interested in theoretical physics and completed his thesis titled Recherches sur la Théorie des Quanta (Researches on the quantum theory) at the Faculty of Sciences at Paris University and it was known to be highly influenced by the works of Albert Einstein. He later described his interest for theoretical physics:

“I was attracted to theoretical physics by the mystery enshrouding the structure of matter and the structure of radiations, a mystery which deepened as the strange quantum concept introduced by Planck in 1900 in his research on black-body radiation continued to encroach on the whole domain of physics“.

At the end of the 19th century, light was thought to consist of waves of electromagnetic fields which propagated according to Maxwell’s equations, while matter was thought to consist of localized particles. In 1900, this division was exposed to doubt, when, investigating the theory of black body thermal radiation, Max Planck proposed that light is emitted in discrete quanta of energy.[4] It was thoroughly challenged in 1905. Extending Planck’s investigation in several ways, including its connection with the photoelectric effect, Albert Einstein proposed that light is also propagated and absorbed in quanta. Light quanta are now called photons.[5,6]

The ideas set out in de Broglie’s doctoral thesis, which first gave rise to astonishment owing to their novelty, were subsequently fully confirmed by the discovery of electron diffraction by crystals in 1927 by Davisson and Germer. In 1927 at Bell Labs, Clinton Davisson and Lester Germer fired slow-moving electrons at a crystalline nickel target. The angular dependence of the diffracted electron intensity was measured, and was determined to have the same diffraction pattern as those predicted by Bragg for x-rays. At the same time George Paget Thomson at the University of Aberdeen was independently firing electrons at very thin metal foils to demonstrate the same effect. Before the acceptance of the de Broglie hypothesis, diffraction was a property that was thought to be exhibited only by waves. Therefore, the presence of any diffraction effects by matter demonstrated the wave-like nature of matter.

“The history of science shows that the progress of science has constantly been hampered by the tyrannical influence of certain conceptions that finally came to be considered as dogma. For this reason, it is proper to submit periodically to a very searching examination, principles that we have come to assume without any more discussion.”
— Louis de Broglie, Will Quantum Physics Remain Indeterministic (1953).

These experiments served as the basis for developing the general theory nowadays known by the name of wave mechanics, a theory which has utterly transformed our knowledge of physical phenomena on the atomic scale. The concept of matter waves in quantum mechanics reflects the wave–particle duality of matter. The waves became later known as de Broglie waves and in his theory, the scientist shows that the wavelength is inversely proportional to the momentum of a particle. Also, the frequency of matter waves, as deduced by de Broglie, is directly proportional to the total energy E (sum of its rest energy and the kinetic energy) of a particle [1,2]. Recently, it was also found that investigating the elementary process of diffusion gives the theoretical evidence of the relation of matter wave, regardless of the photon energy. It is thus revealed that the relation of matter wave is now not a hypothesis but an actual equation relevant to a characteristic of micro particle. The wave-like behavior of matter is crucial to the modern theory of atomic structure and particle physics.

De Broglie continued his career in publishing further scientific works teaching at Sorbonne. The Institut Henri Poincaré was just built in Paris in this period, and the scientist was offered to teach courses in theoretical physics there. He became the chair of theoretical physics at the Faculty of Sciences at the University of Paris in 1932 and it is known that many French and international students came to work with the brilliant de Broglie, who also supervised numerous doctoral theses [2]. Louis de Broglie devoted his work mostly to the study of the various extensions of wave mechanics. It is known that he put much effort into Dirac’s electron theory, the new theory of light, the general theory of spin particles, and applications of wave mechanics to nuclear physics and he authored over 25 books on these various fields of study. In 1929, he was awarded the Henri Poincaré medal at the Academie des Sciences and in the same year, the Swedish Academy of Sciences conferred on him the Nobel Prize for Physics “for his discovery of the wave nature of electrons”. The scientist was elected a member of the Academy of Sciences of the French Institute in 1933 and became its Permanent Secretary for the mathematical sciences three years later [1,3].

During the fighting between France and Germany in the Second World War, de Broglie was entrusted with the documentary collection of works on news broadcasting published in the United States. In 1941, he published a book on radio frequency technology in this context. In 1944, Louis de Broglie became a member of the Académie française and, after the Second World War, advisor to the French Atomic Energy Commission. In December 1949, de Broglie submitted the first official proposal for a European nuclear research laboratory for discussion at the European Cultural Conference in Lausanne. A proposal that led to the foundation of the European Organization for Nuclear Research (CERN). Louis-Victor de Broglie died on 19 March 1987 in Louveciennes near Paris.