You are here: Home › computer games › Leslie Comrie – a Pioneer in Mechanical Computation 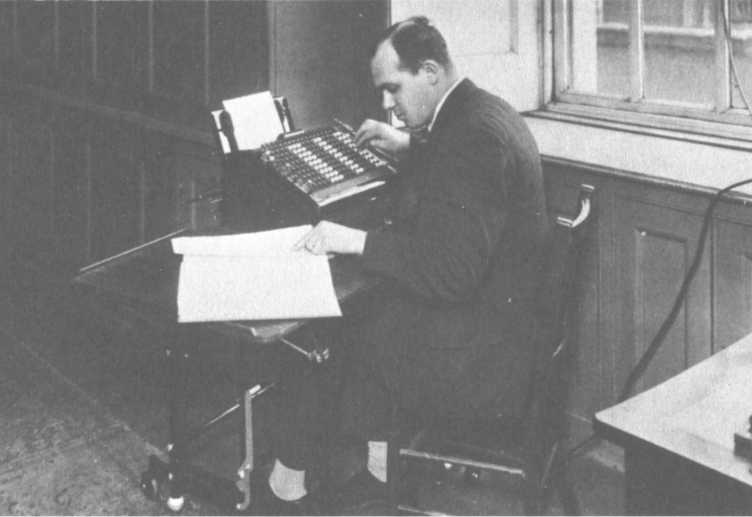 On August 15, 1893, New Zealand astronomer Leslie John Comrie was born. Comrie was a pioneer in the application of punched-card machinery to astronomical calculations and founded the world’s first private company for scientific computing in 1937.

Leslie John Comrie was born in Pukekohe near Auckland, New Zealand. He attended Auckland University College, which is part of the University of New Zealand from 1912 to 1916, graduating with BA and MA degrees with Honours in Chemistry. During World War I, despite severe deafness, he saw action in France with the New Zealand Expeditionary Force, and lost his left leg in February 1918 to a British shell. While convalescing he started using a mechanical calculator and went on to modify commercial calculators for specific projects.

From Chemistry to Scientific Computing

Forsaking chemistry, he followed an earlier interest in astronomy and computation, in which he was destined to become a master. Having joined while in school in New Zealand, Comrie was eventually the first director (1920–1922) of the Computing Section of the British Astronomical Association. Proceeding to St. John’s College, Cambridge, as a research student, he was elected to an Isaac Newton Scholarship in 1920. He was awarded the Ph.D. degree in 1923 for a thesis on occultations of stars by planets.[3] He traveled to the USA to teach at Swarthmore College and then Northwestern University in 1924 where he pioneered the teaching of numerical analysis. He returned to England to join HM Nautical Almanac Office at the Royal Greenwich Observatory where he became deputy superintendent in 1926.

Comrie was the first to turn punched-card equipment to scientific use: in April 1928 his article On the Construction of Tables by Interpolation described the use of punched card equipment for interpolating the computation of astronomical tables by the method of finite differences, as envisioned by Charles Babbage 100 years earlier for his Difference Engine, comparing this with the less efficient and more error-prone methods using mechanical devices such as the pinwheel calculators under the Brunsviga brand name.[4] Differencing was used because the early punched-card machines were capable only of addition and subtraction; not division, multiplication, exponentiation, roots, trigonometric functions, etc. Comrie had already been using this method for many years with hand-operated desktop calculators.

Also in 1928, he was using Fourier synthesis to compute the principal terms in the motion of the Moon for 1935 to 2000 improving the predictions of Ernest William Brown. Wallace J. Eckert, an American student of Brown at Columbia University would in turn use the vast resources of IBM corporation to improve on the predictions even further. Leslie Comrie was promoted to Superintendent of the Nautical Almanac Office in 1930. However, his unconventional use of machines for calculation caused tensions with his superiors, and he was suspended in August 1936.

In his May, 1932, article, The Application of the Hollerith Tabulating Machine to Brown’s Tables of the Moon, Comrie describes his punched-card methods in far greater detail, with paragraphs given over the function and operation of each component: card, punch, sorter, tabulator, printer. In this article, for the first time, we have a description of “programming”:

Automatic Control.—This feature is of the utmost importance in the present application. When the cards corresponding to any one date have been added, the feeding must cease while the total is being printed, the counters must be cleared and then the feeding must be resumed. This sequence is performed automatically, without any attention whatsoever on the part of the operator. (Leslie J. Comrie: The Application of the Hollerith Tabulating Machine to Brown’s Tables of the Moon, 1932)

Leslie Comrie left the Admiralty in 1936 to found the Scientific Computing Service in 1937, the world’s first private company for scientific computing, where he was able to better apply his ideas of mechanical computation for the preparation of mathematical tables. During World War II he headed a team of 30 scientists to computerise war work, such as the creation of bombing tables and the compilation of geodetic tables for the Allies of World War II. Later he computerised British football pools. After the war Comrie visited the USA and New Zealand in 1948. He was elected a Fellow of the Royal Society of London in March 1950. Leslie Comrie died aged 57 on 11 December 1950 after a series of strokes.

Deafness and the physical disabilities of a lost leg may have been the reason for his apparent lack of great interest in things other than his chosen work of computational astronomy. On the other hand, to deal with such a subject on the scale undertaken by Comrie would leave little time for anything else. His impact on computational and precision astronomy may perhaps be appreciated only by those engaged in such subjects over the last few decades, but its immensity would soon be discovered if students had to revert to the methods in use before his time. Virtually he made the discovery that the then existing calculating machines, which were designed for commercial practice, could be adapted to scientific work, and that specialised machines need not be designed.[3]