You are here: Home › computer science › The World Digital Library 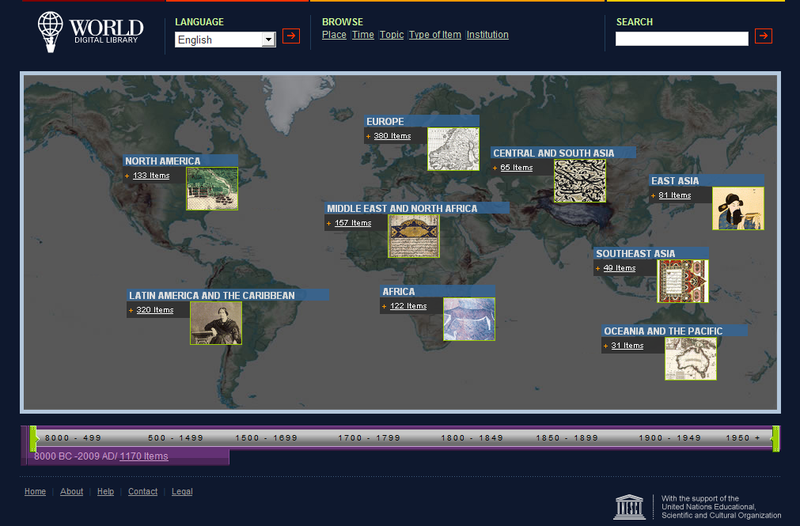 On April 21, 2009, the World Digital Library (WDL) was launched. The WDL is an international digital library operated by UNESCO and the United States Library of Congress. The library intends to make available on the Internet, free of charge and in multilingual format, significant primary materials from cultures around the world, including manuscripts, maps, rare books, musical scores, recordings, films, prints, photographs, architectural drawings, and other significant cultural materials.

A View of the Digital World Library

In 2003, the United States re-established its permanent delegation to the United Nations Educational, Scientific and Cultural Organization and Dr. James H. Billington, Librarian of Congress was then nominated commissioner of the U.S. National Commission to UNESCO. He was invited to give a plenary speech at its inaugural conference in 2005 in which he entitled ‘A View of the Digital World Library‘. Billington described a vision in which the rich collections that “institutions, libraries, and museums have preserved could be given back to the world free of charge and in a new form far more universally accessible than any forms that have preceded it.”

The project includes manuscripts, maps, rare books, music, sound recordings, films, photographs and architectural plans and other types of documents. A search is possible in full text via an input field and also graphically. A timeline can be used to limit the time period of the result search. For the pre-selection a world map is offered for the selection of regions. The selected document can be searched with a zoom to details in the high-resolution version. An explanatory text is available for the digitized original documents. Project languages are the six official UN languages Arabic, Chinese, English, French, Russian and Spanish as well as Portuguese. Keywords for a full text search can be entered in a further input field. If the document selection is successful, related documents (related items) are offered. Accessibility was implemented according to the recommendations of the Web Content Accessibility Guidelines 2.0.

The World Digital Library and the European portal Europeana are two separate projects and have different objectives. Europeana mainly covers digital collections about Europe in European libraries, archives and museums. The World Digital Library will offer culturally and historically particularly significant content from all 193 UNESCO member countries. The objects, which are mainly stored as TIFF and PDF files, are not linked from the original sites, but are located on separate WDL servers. At the start the WDL contained 1170 objects, only two days later 1358 objects were reported. Billington said, “It’s an open process.” Accordingly, there is also no target figure.

Currently, the content on the World Digital Library is provided by 131 partners in 58 countries. The library holds more than 660.000 downloadable files and the most represented item types are books with almost 360.00 files, manuscripts with almost 250.000 files and journals with more than 18.000 files.

Brewster Khale, A Library Free to the World, [7]