You are here: Home › aviation › Theodore von Kármán and his Advances in Aerodynamics 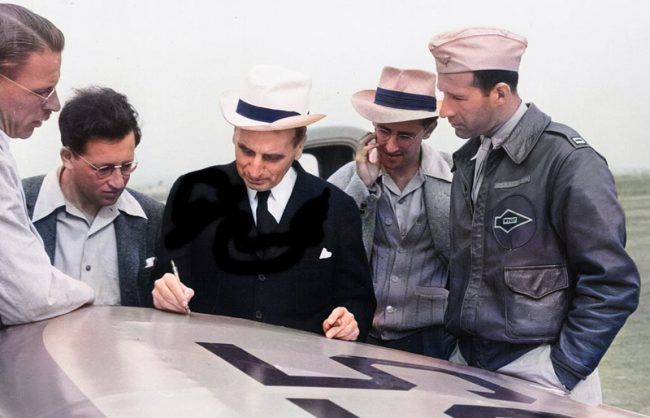 On May 11, 1881, Hungarian-American mathematician, aerospace engineer and physicist Theodore von Kármán was born. Kármán was active primarily in the fields of aeronautics and astronautics. He is responsible for many key advances in aerodynamics, notably his work on supersonic and hypersonic airflow characterization.

“I came to realize that exaggerated concern about what others are doing can be foolish. It can paralyze effort, and stifle a good idea. One finds that in the history of science almost every problem has been worked out by someone else. This should not discourage anyone from pursuing his own path.”
– Theodore von Kármán, The Wind and Beyond, 1967

Theodore von Kármán was born as the third of five children and came from a distinguished Jewish family in Budapest. His father taught education in Budapest. He studied engineering at the Budapest’s Royal Joseph Technical University. He then moved to Germany joining Ludwig Prandtl at the University of Göttingen. There, Kármán received his doctorate in 1908 with a thesis on the theory of elasticity (buckling strength of bars). In 1910 he habilitated in Göttingen. Before accepting a position as director of the Aeronautical Institute at RWTH Aachen, Kármán taught at Göttingen for several years. In 1911 and 1912 von Kármán published what is probably his most famous work on the Kármán vortex roads, which were later named after him. In Göttingen he also worked with Max Born on specific heat in the quantum theory of crystal lattices (Born-von-Kármán model). With some of his early work he is also counted among the pioneers of plasticity theory. In 1910 and 1913 he wrote the articles on strength theory in the Encyclopedia of Mathematical Sciences (partly with August Föppl) and in 1910 he invented the triaxial device. In the 1920s he continued to publish papers on plasticity theory.

RWTH Aachen and World War I

In 1913 he followed a call to the “Königlich Rheinisch-Westphälische Polytechnische Schule” in Aachen (today: RWTH Aachen University), where he was henceforth head of the Institute of Mechanics and Aerodynamics of Flight Engineering (today Institute of General Mechanics). During this time he lived in the neighbouring Dutch town of Vaals. However, his time at RWTH Aachen was interrupted by service in the Austro-Hungarian Army from 1915 to 1918, during which time he designed the Petróczy-Kármán-Žurovec, an early helicopter. Such vertically ascending aircraft were intended to replace the tethered balloons used until then for enemy observation. The PKZ-2 reached a flight altitude of about 50 meters, which was a record at that time. During a demonstration flight on 10 June 1918 in Fischamend the aircraft crashed.

The end of the war prevented further development. After the war he returned to Aachen with his mother and sister Josephine de Kármán. In 1920 von Kármán and Wolfgang Klemperer founded the Flugwissenschaftliche Vereinigung Aachen, an association of students from the RWTH Aachen University that is still active in aerospace research today. Von Kármán constructed the glider FVA-1 “Schwatze Düvel” there together with Klemperer on the occasion of the “first Rhön gliding and gliding competition“, which Klemperer was able to finish victoriously with his constructionThey organized the first international conference in mechanics held in September 1922 in Innsbruck.

Due to the political situation in Europe during the 1930s, the engineer migrated to the United States where he became director of the Guggenheim Aeronautical Laboratory at the California Institute of Technology. One of his students was Ernest Edwin Sechler, who started working on thin-shell structures. With the help of Theodore von Kármán, Sechler was able to tackle the problem of making reliable airframes for aircraft and developed an understanding of aeroelasticity. 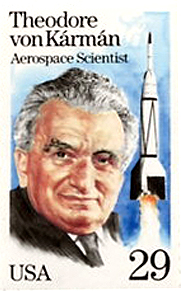 “A scientist studies what is, whereas an engineer creates what never was.”
– Theodore von Kármán, as quoted in [7]

Along with his graduate student Frank Malina, the lawyer Andrew G. Haley, and the experimental rocketry collaborator Jack Parsons, Theodore von Kármán formed the Aerojet Corporation to manufacture JATO rocket motors . During World War II, the US military invested more and more in rocket research. The Experimental Engineering Division of the United States Army Air Forces Material Command forwarded to Kármán reports from British intelligence sources describing German rockets capable of travelling more than 100 miles (160 km) and Kármán provided the Army with his analysis of and comments on the German program.

Theodore von Kármán became co-founder of the Jet Propulsion Laboratory, now a Federally funded research and development center managed and operated by Caltech under a contract from NASA. Kármán became the chairman of the Scientific Advisory Group in 1946. He also became an important figure in supersonic motion. He noted in a seminal paper that aeronautical engineers were “pounding hard on the closed door leading into the field of supersonic motion.” Kármán’s fame was in the use of mathematical tools to study fluid flow, and the interpretation of those results to guide practical designs. He was instrumental in recognizing the importance of the swept-back wings that are ubiquitous in modern jet aircraft.

From its foundation in 1956 until his death, von Kármán was head of the Von Karman Institute of Fluid Mechanics in Belgium. He died during a cure in Aachen in 1963. Theodor von Kármán was an honorary member or member of 41 national scientific societies in twelve different countries. He was awarded honorary doctorates 28 times, including honorary doctorates from three German universities, in 1953 from RWTH Aachen University.

Lecture 7: Aerodynamics – (From Sub – to Hypersonic and Back) (Audio Normalized), [8]