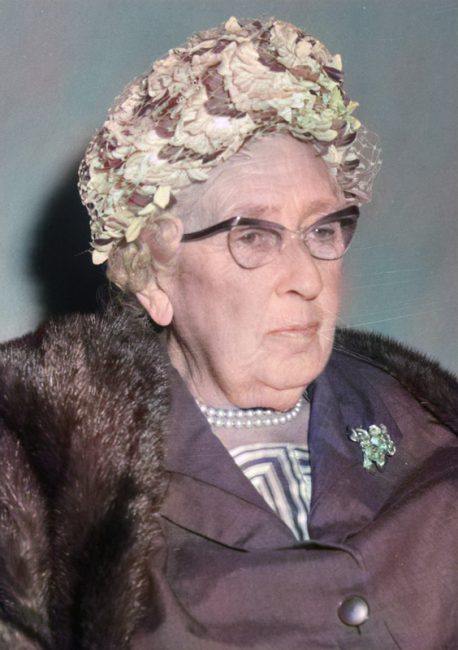 “Oh dear, I never realized what a terrible lot of explaining one has to do in a murder!”
— Agatha Christie, Spider’s Web (1956)

Agatha Mary Clarissa Miller was born as the youngest child of the American Frederick Alvah Miller and his English wife Clarissa Margaret Boehmer. Her father earned his income from overseas businesses about which nothing is known, but which enabled the family to live in prosperity. Agatha Miller grew up in the Victorian Villa Ashfield in Torquay and was not taught in a school until the age of 16, but by her parents (or mother), who recognised her literary talent at an early age. At the age of eleven she published her first poem in a local newspaper. Frederick Alvah Miller died in 1901, when Agatha was eleven years old. Clarissa Margaret Miller raised her children on her own and tried to make them feel as little as possible the financial situation, which had been aggravated by her father’s death.

Agatha Miller gave up her music studies in Paris at the beginning of the First World War and worked as a nurse (Voluntary Aid Detachment) for the British Red Cross in the local hospital, later in a pharmacy. During this time she gained a lot of experience with toxic substances, which later played a role in her works. In 1914 she married Colonel Archibald Christie, a Royal Air Force pilot.

In 1920 her first crime novel was published: The Mysterious Affair at Styles with the Belgian detective Hercule Poirot first in the USA, then in England. Christie became suddenly famous with the 1926 published work The Murder of Roger Ackroyd.

In her private life, the 1920s were rather unhappy: her husband often left her alone for work reasons, her mother died in 1926 – an event that took her with it; Ashfield also had to be evacuated. Christie exhausted this situation. In August 1926, her husband confessed to her affair with his golf partner Nancy Neele. Despite several attempts at reconciliation, the couple became more and more divided afterwards. Agatha Christie left the house on December 3, 1926, after a fierce quarrel. Her car was found a few days later abandoned at a lake. After a spectacular search, which was also reported in the New York Times and in which Arthur Conan Doyle participated,[1] the writer was found ten days after her disappearance in a hotel in Harrogate, where she had stayed under the name of her husband’s lover as Mrs. Neele. Subsequently, the question of the cost of the search operation also preoccupied the British Parliament. Her family spread the message that she had suffered an almost complete memory loss for those days. Agatha Christie herself never said anything about her motives, not even in her memoirs. Her marriage to Archibald Christie was divorced in 1928.

“Understand this, I mean to arrive at the truth. The truth, however ugly in itself, is always curious and beautiful to seekers after it.”
— Hercule Poirot in Agatha Christie’s The Murder of Roger Ackroyd (1926)

In order to recover from the strains of the past years, she decided relatively spontaneously in the autumn of 1928 to make an extended trip to the Middle East and travelled to Baghdad on the Orient Express.[2] This spontaneous decision (she had actually thought of the Caribbean as her destination) was to change Agatha Christie’s life significantly and exert great influence on her literary work. It was not her first encounter with the Middle East, as she had already been to Cairo with her mother as a young woman. From Baghdad she travelled on to Ur, where the archaeologist Leonard Woolley was busy with excavations that caused a sensation in England at the time.[3] He and his wife Katharine Woolley received the celebrity Agatha Christie with great pleasure; she stayed with the excavation team for some time and made friends with the Woolleys. Later, she dedicated the short story collection The Thirteen Problems to them. The Woolley couple also modelled the main characters of the novel Murder in Mesopotamia, with Agatha Christie adding some very unappealing traits to the Woolleys.

When she returned to London, she did so with an invitation from Katharine Woolley to return to Mesopotamia in the spring of 1930. During this second stay in Ur she also met the 14-year younger archaeologist Max Mallowan, who worked as an excavation assistant for Woolley. Mallowan was now “detached” from the Woolleys to show Christie the excavations and the area. On this occasion they fell in love. Agatha Christie had to return to England very soon due to an illness of her daughter, Max Mallowan already accompanied her on this return journey. Agatha hesitantly accepted the marriage proposal of the much younger Mallowan and they married on 11 September 1930 in Edinburgh.

In 1930, a new detective made her first appearance in The Murder at the Vicarage: the old-young Miss Marple, who was to play the leading role in twelve other crime novels and several short stories by Christie. Christie wrote many of the many novels she wrote in the years leading up to 1958 during her archaeological expeditions with her husband in northern Iraq and Syria.

In the 1940s, Christie wrote two detective novels, which she held back for later publication, marked by the events that threatened her existence after her separation from her first husband. Poirot’s Last Case, prepared by her for publication when it became apparent that she would not be able to write another novel. It appeared shortly before her death, and it is indeed Poirot’s last case who dies at the end of the investigation. But Poirot was Agatha Christie’s main source of income, and so it was necessary for him to solve many other cases – 32 exactly – before the final case appeared. Sleeping murder, with Miss Marple as a detective, was Christie’s second restrained novel and only appeared after her death.

In 1970 the controversial novel Passenger to Frankfurt, atypical for Christie, was published on her 80th birthday. It deals with a world conspiracy by neo-Nazis. In 1971, Agatha Christie was accepted by Queen Elizabeth II as Lady Commander in the Order of the British Empire and thus elevated to the rank of personal nobility. Her last novel Postern of Fate she wrote between 1973 and 1974.

On 12 January 1976 Agatha Christie died of a stroke in Winterbrook House, Wallingford, Oxfordshire, at age 85.

“I like living. I have sometimes been wildly despairing, acutely miserable, racked with sorrow, but through it all I still know quite certainly that just to be alive is a grand thing.”
— Agatha Christie, An Autobiography (1977)

Altogether Agatha Christie wrote 66 crime novels, but also short stories and stage plays. Current estimates, according to the heirs and publishers, assume a total sold circulation of over two billion books worldwide. According to UNESCO’s Index Translationum, she ranks first by a wide margin on the list of the most frequently translated authors. She is regarded as the most successful crime writer in the world. Because of this success, she is also called the Queen of Crime.  And Then There Were None is Christie’s best-selling novel, with 100 million sales to date, making it the world’s best-selling mystery ever, and one of the best-selling books of all time.

Agatha Christie also made a career in the theatre, because due to bad experiences she decided to work on her plays only for the stage herself and was enthusiastically involved in the production. One of her stage plays is The Mousetrap, the longest continuously performed play in the world. In 1955, Christie was the first recipient of the Mystery Writers of America’s highest honour, the Grand Master Award. Later the same year, Witness for the Prosecution received an Edgar Award by the MWA for Best Play. In 2013, The Murder of Roger Ackroyd was voted the best crime novel ever by 600 fellow writers of the Crime Writers’ Association. Most of her books and short stories have been adapted for television, radio, video games and comics, and more than thirty feature films have been based on her work.

An Evening with Agatha Christie [8]