You are here: Home › history › The Legend of Bonnie and Clyde 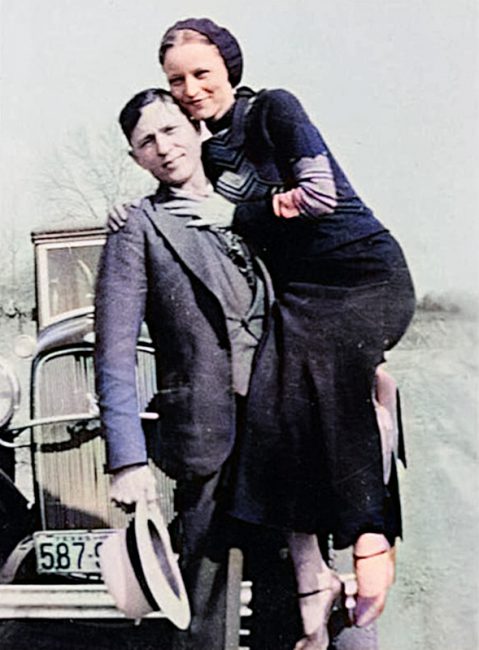 On May 23, 1934, the American robbers Bonnie and Clyde are ambushed by police and killed in Black Lake, Louisiana. Bonnie Elizabeth Parker and Clyde Chestnut Barrow became American pop folklore as outlaws and robbers when traveling the central United States with their gang during the Great Depression.

Bonnie Elizabeth Parker got married to Roy Thornton shortly after they had dropped out of high school. The marriage was not considered as happy and they broke up quite soon even though they never got divorced. She worked as a waitress in Dallas and to her frequent customers belonged Ted Hinton, who would join the Dallas Sheriff’s Department in 1932 and participated in her ambush. Clyde Chestnut Barrow’s career as a criminal started when he was 17 and he first got arrested for the possession of stolen turkeys and for running from the police after failing to return a rental car on time. After several further crimes, he was sent to Eastham Prison Farm and there, he was sexually abused in and killed one man for doing so. His sister stated that “something awful sure must have happened to him in prison, because he wasn’t the same person when he got out“. Barrow continued his ‘career’ robbing grocery stores and gas stations, but it was said that “Barrow’s goal in life was not to gain fame or fortune from robbing banks, but to seek revenge against the Texas prison system for the abuses he suffered while serving time“. It is assumed that Bonnie and Clyde met on January 5, 1930.

Clyde and his companions started a series of robberies in order to collect enough money and firepower to launch a raid of liberation against Eastham prison. They killed several people during their robberies including lawmen and by then, Clyde was accused of murder for the first time. Bonnie and Clyde brushed the law quite often already in this period. The gang attracted the police’s attention while discharging an automatic rifle while someone cleaned it. The officers assembled a five-man force in two cars on to confront what they suspected were bootleggers living in the garage apartment. The gang killed the detective and wounded another officer immediately and they fled the apartment while getting wounded themselves as well. The gang left most of their belongings including weapons, poems by Bonnie, undeveloped film rolls and official documents in the apartment. The group became quickly known as the Barrow Gang across the country. They continued their robberies ranging from Texas to Minnesota, not hesitating to kill or wound anyone.

However, life got more and more difficult as the crimes continued. They avoided public places and got used to washing themselves in the rivers as well as preparing their food over camp fires. In 1933, the gang checked into the Red Crown Tourist Court in Missouri and started to attract attention through the way they dressed and behaved. Quickly, the police put the cabins under surveillance and shortly after the sheriff led a group of officers armed with Thompson submachine guns toward the cabins. This time, the gang was not as successful evading the law. One member was shot in the head and died a few days after surgery and another was captured. The remaining trio ranged far afield from their usual area of operations. When another member of the gang got arrested, Bonnie and Clyde were the only remaining gang members for a while.

In January 1934, Clyde organized a jailbreak for Raymond Hamilton. During the attempt, prison officer Major Joe Crowson was shot, which resulted in a full power manhunt by the Texas and federal governments. Former Texas Ranger Captain Frank Hamer was contacted and persuaded to hunt down the Barrow Gang. In April of the same year, Bonnie and Clyde were accused of firing fatal shots at two young highway patrolmen and a 1000 USD reward was offered for the couple’s bodies. The public hostility towards the gang increased when a widower single father was killed. Hamer started tracking the gang in February, 1934 and studied their movements. The gang’s itinerary centered on family visits, and they were due to see their new partner’s family in Louisiana. Hamer expected this, and had obtained a quantity of civilian Browning Automatic Rifles and 20-round magazines with armor-piercing rounds.

The posse concealed in the bushes, knowing the couple’s approximate location. When Clyde approached with his stolen Ford V8, the lawmen opened fire, killing Bonnie and Clyde while shooting a combined total of about 130 rounds. Researchers have said Bonnie and Clyde were shot more than fifty times and the officers inspected the vehicle and discovered an arsenal of weapons, including stolen automatic rifles, sawed-off semi-automatic shotguns, assorted handguns, and several thousand rounds of ammunition, along with 15 sets of license plates from various states. A large crowd gathered at the scene and policemen had to guard the bodies. Still, a woman managed to cut off bloody locks of Bonnie’s hair and pieces from her dress, which were then sold. One man even attempted to to cut off Clyde’s trigger finger. Within hours, the small town was estimated to swell in population from 2,000 to 12,000.