You are here: Home › psychology › Learning and Motivation according to Clark Leonard Hull 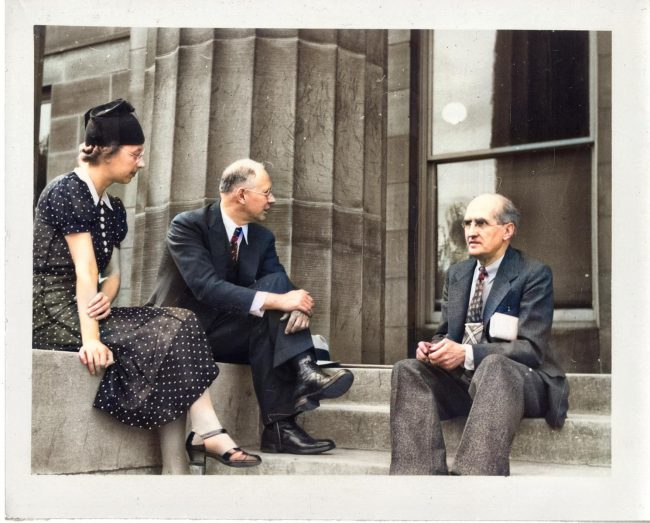 On May 24, 1884, American psychiatrist Clark Leonard Hull was born. Hull sought to explain learning and motivation by scientific laws of behavior and is also known for his work in drive theory. He was able to establish his analysis of animal learning and conditioning as the dominant learning theory of its time. He is perhaps best known for the “goal gradient” effect or hypothesis, wherein organisms spend disproportionate amounts of effort in the final stages of attainment of the object of drives.

Growing up on a Farm in Michigan

Clark Leonard Hull grew up on a farm in Michigan, where he and his brother Wayne helped by performing manual labor and chores around the house. He was educated in a small village school, but probably often missed school due to farm work. Hull became a teacher in a similar school when he was only 17 and attended a high school in west Saginaw County. At Alma Academy, Hull continued his education and became most enthusiastic about mathematics, and especially geometry. In that period, Clark Hull probably first read the works of philosopher Baruch Spinoza, who he admired but also disagreed with. After catching typhoid, Hull was left with permanent amnesia and a general bad memory for names which affected him throughout the rest of his life. His education continued in the field of math, physics, and chemistry.

Enthusiasm for Philosophy and PSychology

Later on, Hull’s enthusiasm for philosophy led to his interest the psychology, which he continued to study. Especially, William James’ book Principles of Psychology influenced him in the beginning. He attended the University of Michigan to study psychology and received his bachelor’s degree in 1913. he started teaching, for instance psychological testing and measurement courses. Clark Hull also became interested in suggestion and hypnosis and wrote his first book on the matter titled Hypnosis and Suggestibility in 1933. Hull became professor of psychology at Yale University and researched in the field of behavior theory.

In the field of behavior theory, Clark Hull was highly influenced by Ivan Pavlov and Watson,[4] as well as Edward Thorndike.[5] Hull proceeded to dedicate much of his laboratory work to develop his own theory. Hull also discussed many of his ideas with the students in his courses. Hull began to work towards neobehaviorism with the goal to determine the laws of behavior and how they can be used to determine future behaviors. He developed formulas and worked with the computing machine as he believed a machine could be built to replicate mental processes.

Clark Hull put the emphasis of his work on experimentation, an organized theory of learning, and the nature of habits, which he argued were associations between a stimulus and a response. Behaviors were influenced by goals that sought to satisfy primary drives—such as hunger, thirst, sex, and the avoidance of pain. His systematic behavior theory, also known as drive theory, is that of a reinforcement system, which means that in learning, habits are initially formed by reinforcing certain behaviors. Reinforcement of a response to a behavior supplies an effect that satisfies a need. In other words, this satisfaction of needs helps create habits out of behaviors. Specifically, Hull’s theory posits that behaviors that satisfy needs, later described by Hull as cravings rather than needs, reduce these cravings. He called this concept drive-reduction, or drive-stimulus reduction. Other behaviorists found Hull’s theories to be too cumbersome for practical use, leading to his work to be eclipsed by Skinner.

During 1929, he began employment with Yale University and retained it until his death. He died on May 10, 1952, in New Haven, Connecticut. During his time at Yale, Hull was regarded as a very important person with great influence on his and neighbouring disciplines. The psychologists influenced by his ideas are also called neo-Hullians. Literature mentions Neal E. Miller, Orval Hobart Mowrer, for example. n 1930, he came to several conclusions about psychology: the first was that he believed that psychology is a true natural science. The second was that its primary laws are expressed quantitatively by moderate number equations and that all complex behavior or single individuals will be derived as second laws. The third was that the primary laws with the behavior (based on the condition) can also be derived as quantitative laws from the same primary equation. He and other psychologists looked into these ideas more, they sought to understand what underlined conditioned reflex and behavior while also seeking to understand Freud and others like him. This eventually led to his work that he is primarily known for, Principles of Behavior.

Hull was one of the most frequently cited psychologists during the 1940s and 1950s. Aptitude Testing (1928) was a widely quoted textbook and his work Hypnosis and Suggestibility: An Experimental Approach (1933) was widely studied. Hull’s Principles of Behavior (1943) was one of the most widely cited books in psychology. In an old Handbook of Experimental Psychology, his work was mentioned on over eighty pages, which was more than all other scientists at the time. Hull’s ideas were so appealing in part because of his professional background in engineering. He was very good with math and numbers, and incorporated his numerical knowledge into the field of psychology.