You are here: Home › philosophy › Jürgen Habermas and Communicative Rationality 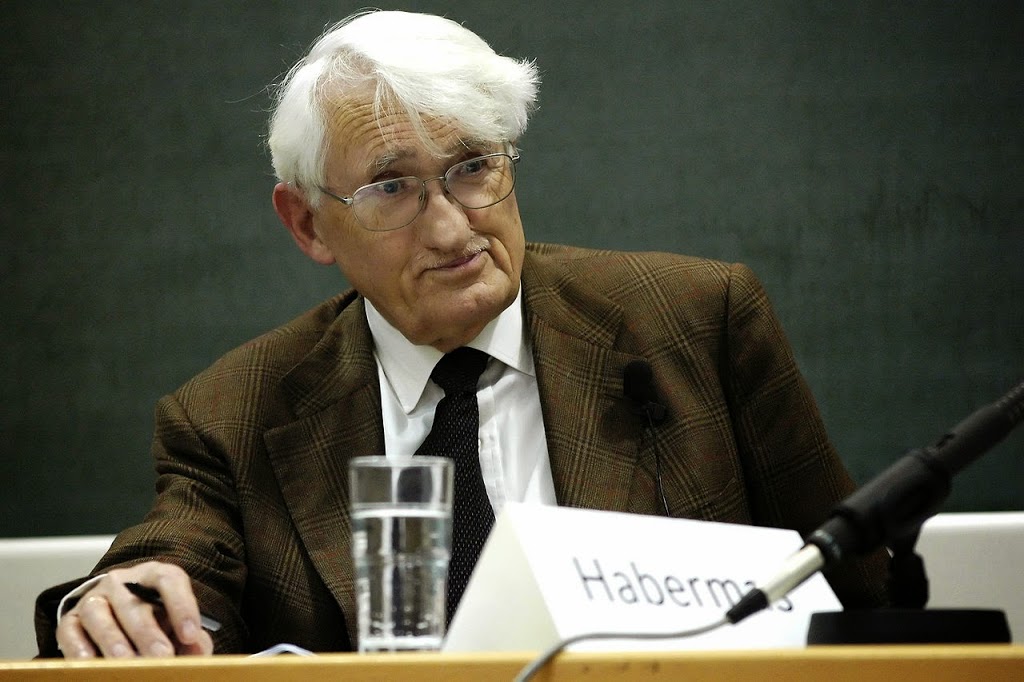 On June 18, 1929, German sociologist and philosopher Jürgen Habermas was born. Widely recognized as one of the world’s leading intellectuals, Habermas is perhaps best known for his theories on communicative rationality and the public sphere.

“Subjects who reciprocally recognize each other as such, must consider each other as identical, insofar as they both take up the position of subject; they must at all times subsume themselves and the other under the same category. At the same time, the relation of reciprocity of recognition demands the non-identity of one and the other, both must also maintain their absolute difference, for to be a subject implies the claim of individuation.”
– Habermas (1972) “Sprachspiel, intention und Bedeutung. Zu Motiven bei Sellars und Wittgenstein”.

Jürgen Habermas+ was born in Gummersbach, Rhine Province, Germany. He was born with a cleft palate and had corrective surgery twice during childhood.Habermas argues that his speech disability made him think differently about the importance of deep dependence and of communication. Growing up during World War II he was highly influenced by the post-war period and especially the Nuremberg Trials, during which he was exposed to the depth of Germany’s moral and political failure under National Socialism. During his time as a graduate student, Habermas noticed that most German philosophers had failed to understand nor to criticize National Socialism. His negative experience regarding the relation between politics and philosophy motivated his further research on the pragmatic and democratic traditions. Also in this period, Habermas met Karl-Otto Apel for the first time, who influenced his philosophical thoughts significantly. He first received great media attention through his critical review on Heidegger’s “Introduction to Metaphysics“[5]. In 1954, Habermas finished his dissertation on the conflict between the absolute and history in Schelling’s thought and started a journalism career at the “Frankfurter Allgemeine Zeitung” and several other newspapers.

Shortly after however, Habermas received a scholarship and started working for Max Horkheimer and Theodor W. Adorno [8] and was highly influenced in his thoughts on Marxism by the German American philosopher, sociologist, and political theorist Herbert Marcuse. Still, Habermas gained first serious public attention by the scientific community with the 1962 publication if his habilitation “Structural Transformation of the Public Sphere“. Habermas was appointed professor for sociology and philosophy at the University of Frankfurt in 1964, where he published his work “Knowledge and Human Interests“, in which he first attempts to provide a systematic framework for an interdisciplinary critical social theory.

In the early 1970s, Habermas moved to Munich where he became along with Carl Friedrich von Weizsäcker the co-director of the Max-Planck-Institut. He received the Theodor-W.-Adorno-Prize in 1980 and published his masterpiece “The Theory of Communicative Action” one year later. The two volume work contains critical studies of the theories of rationality that informed the classical sociologies of Weber, Durkheim, Parsons, and neo-Marxist critical theory. The two volumes are “Reason and the Rationalization of Society“, which establishes a concept of communicative rationality, and “Lifeworld and System: A Critique of Functionalist Reason“, which creates the two level concept of society and lays out the critical theory for modernity. The work has inspired many responses by social theorists and philosophers, and in 1998 the International Sociological Association listed this work as the eighth most important sociological book of the 20th century. In Volume 2, Habermas introduces a definition of the process of communicative rationality: this is communication that is “oriented to achieving, sustaining and reviewing consensus – and indeed a consensus that rests on the intersubjective recognition of criticisable validity claims“. The result of the theory is a conception of reason that Habermas sees as doing justice to the most important trends in twentieth century philosophy, while escaping the relativism which characterizes postmodernism, and also providing necessary standards for critical evaluation. Habermas’ theory has been criticized for being utopian and idealistic by Foucault and Caloun. Further scientists, such as Cohen and Fraser, criticized that the theory was blind to issues of gender, race, ethnicity, and sexuality, and that it ignored the role of conflict, contest, and exclusion in the historical constitution of the public sphere.

Even after his retirement in 1994, Habermas continued to speak out in public. In March 1999 he took a stance in the weekly newspaper Die Zeit for the NATO mission in the Kosovo war. The controversy triggered in the same year by Peter Sloterdijk’s speech Rules for the Human Park on the subject of eugenics prompted Habermas to publish The Future of Human Nature in 2001. On the road to liberal eugenics? In his speech on the occasion of the award of the Kyoto Prize, Freedom and Determinism (2004), he also addressed the question of human freedom raised by current brain research.