You are here: Home › medical science › Joseph Merrick – The Story of the Elefant Man 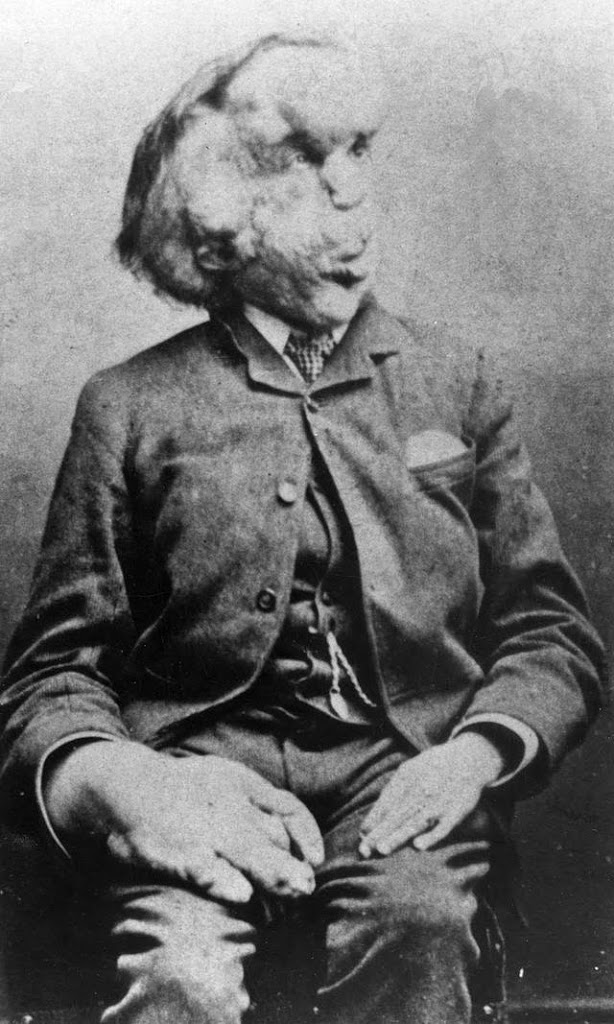 On August 5, 1865, Joseph Carey Merrick was born. Sometimes incorrectly referred to as John Merrick, Joseph Carey Merrick was an English man with severe deformities who was exhibited as a human curiosity named the Elephant Man. He became well known in London society after he went to live at the London Hospital. You might have heard of Merrick from David Lynch’s popular film ‘The Elefant Man‘, released in 1980 starring Anthony Hopkins.

Frightened by a Fairground Elephant

Joseph Merrick was born in Leicester, Leicestershire, as one of four siblings and had no outward symptoms of any disorder for the first few years of his life. As he grew, a noticeable difference between the size of his left and right arms appeared and both his feet became significantly enlarged. His skin appeared thick and lumpy, he developed an enlargement of his lips, and a bony lump grew on his forehead. At some point during his childhood he fell and damaged his hip. This injury became infected and left him permanently lame. The Merrick family explained his symptoms as the result of his mother Mary’s being knocked over and frightened by a fairground elephant while she was pregnant with Joseph. The concept of maternal impression — that the emotional experiences of pregnant women could have lasting physical effect on their unborn children — was still common in 19th century Britain. Merrick held this belief about the cause of his affliction for his entire life.

Life as a Curiosity

When he was 10, his mother died and his father soon remarried. Merrick left school at 13, which was quite usual for that time, but had difficulty finding employment. Merrick was becoming a greater financial burden on his family and eventually, his father secured him a hawker’s licence which enabled him to earn money selling items from the haberdashery shop, door to door. But, Merrick’s facial deformities rendered his speech increasingly unintelligible and prospective customers reacted with horror to his physical appearance. Being severely beaten by his father and feeling rejected by his family, he left home for good. In late 1879, aged 17, Merrick entered the Leicester Union Workhouse. After four years in the workhouse and after several futile trials to get work, Merrick contacted a showman and proposed that he should exhibit him as the Elephant Man. Merrick suffered from a genetic disorder that not only caused enormous changes in the skin, but also boosted the bones. In this way, with a body height of 157 cm, the head (circumference 91 cm), the arms and legs were enlarged overdimensionally, only the left hand was not affected by the disease.

In London he was exhibited in a penny gaff shop on Whitechapel Road, directly across the street from the London Hospital. One day he was visited there by a surgeon named Frederick Treves, who invited Merrick to be examined and photographed. After getting on tour in Europe, Merrick was robbed by his road manager and abandoned in Brussels. He eventually made his way back to London. Unable to communicate, he was found by the police to have Frederick Treves’ card on him, who took Merrick back to the London Hospital. Although his condition was incurable, Merrick was allowed to stay at the hospital for the remainder of his life. Merrick’s stay was later funded by the Joseph Merrick Fund, which was raised through donations from readers of the London Times. Treves described Merrick as an intelligent, albeit childishly naïve person with a pleasant character. His language, however, was so distorted by his deformity that only a few people who were in regular contact with him were able to understand him.

Treves visited him daily and the pair developed quite a close friendship. Merrick also received visits from the wealthy ladies and gentlemen of London society. Merrick’s condition gradually deteriorated during his four years at the London Hospital. His facial deformities continued to grow and his head became even more enlarged. Merrick died on 11 April 1890, aged 27. The official cause of death was asphyxia, although Treves, who dissected the body, said that Joseph Merrick had died of a dislocated neck. He believed that Merrick — who had to sleep sitting up because of the weight of his head — had been attempting to sleep lying down, to “be like other people”.