You are here: Home › literature › John Steinbeck and his View of the American Society 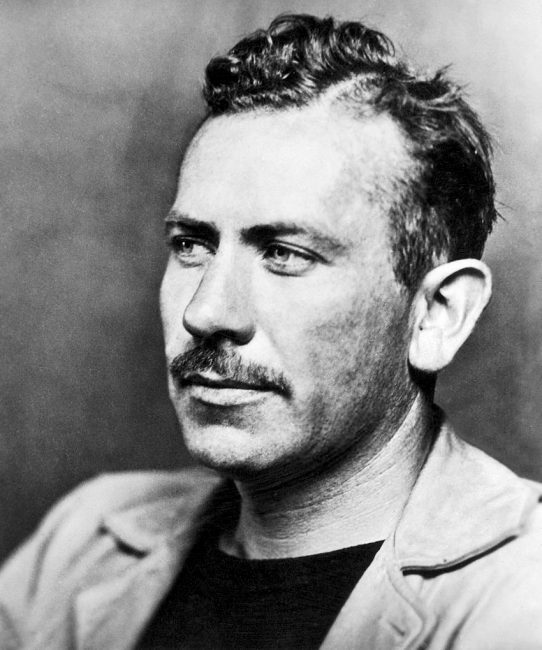 On February 27, 1902, American writer and Pulitzer Prize winner and Nobel Laureate John Steinbeck was born. His works comprise twenty-seven books, including sixteen novels, six non-fiction books, and five collections of short stories, among them ‘The Grapes of Wrath‘, ‘East of Eden‘, and ‘Of Mice and Men‘.

“The writer must believe that what he is doing is the most important thing in the world. And he must hold to this illusion even when he knows it is not true.”
– John Steinbeck, New York Times (2 June 1969)

John Steinbeck was born in Salinas, California, the son of John Ernst Steinbeck and the teacher Olive Hamilton. The father had initially run a mill, but it went bankrupt in 1910, causing the family temporary financial difficulties. As an accountant in a sugar factory and finally as a treasurer in Monterey County, John Ernst Steinbeck returned to modest prosperity and took a respectable position in Salinas. John Steinbeck showed a pronounced interest in literature even as a student and began writing stories himself. In 1919 he successfully applied for a degree at the prestigious Stanford University, where he took courses in English literature, classical literature and ancient history, journalism and other subjects that seemed useful to him for a career as a writer. During semester breaks, Steinbeck worked on farms, at construction areas and factories. It became more and more clear, that the student was rather unsatisfied with the life as an academic and he dropped out of university in 1924, realizing that his jobs had a much greater influence on him than his actual classes. In his later works, he often worked up his experiences he made in these milieus.

In 1925 Steinbeck went to New York as a journalist and freelance writer, but was not very well received there. So he soon returned to California, where he lived from casual work as he did in his student days. In 1929 he published his first novel: Cup of Gold, a biography of the English privateer Henry Morgan. But this as well as the next two works remained almost unnoticed by the critics. Steinbeck and his first wife, Carol Henning, whom he had married in 1930, lived in financially troubled circumstances, alternating between San Francisco, Eagle Rock near Los Angeles and his parents’ holiday home in Pacific Grove near Monterey.

The Author of the New Deal Era

Steinbeck experienced his first success in 1935 with the “episodic novel” Tortilla Flat, in which he depicted the life of a clique of poor, but fun-loving Hispanic Americans, modelled on King Arthur’s mythical Round Table. It is assumed that the 17 stories in this work were inspired by Steinbeck’s co-workers at a sugar factory. After the publication of his novel In Dubious Battle, which deals with a strike by agricultural workers, Steinbeck accepted a commission from the San Francisco News newspaper in 1936 to write a series of articles about migrant workers from Oklahoma uprooted by the “Dust Bowl“. Flocks of totally impoverished “Okies” moved to California in search of jobs from Oklahoma. The experiences he gained during his research on this subject were incorporated into his two works, which have impressed critics and audiences most to this day: the novel Of Mice and Men from 1937 and the socially critical novel The Grapes of Wrath from 1939.

“For man, unlike anything organic or inorganic in the universe, grows beyond his work, walks up the stairs of his concepts, emerges ahead of his accomplishments.”
– John Steinbeck, The Grapes of Wrath (1939)

This novel, which was filmed shortly thereafter by John Ford,[5] was initially often rejected as class struggle and even temporarily banned in California. Steinbeck never saw himself as a socialist in the dogmatic sense, although he had strong sympathies for the political left and had visited the Soviet Union for the first time in 1937. He was a staunch supporter of President Franklin D. Roosevelt‘s New Deal policy. Despite all the hostilities, The Grapes of Wrath earned his author the prestigious Pulitzer Prize in 1940.[4] Due to its realistic depiction of the misery of migrant workers, the book is still regarded not only as a great literary work, but also as a first-rate historical source.

When World War II started, Steinbeck joined the ‘Foreign Information Service’ and realized several propaganda projects, resulting in the theater play ‘The Moon is Down‘. The work was processed into a novel and published in Switzerland in 1943. Underground translations printed and distributed in several European countries occupied by the National Socialists did not fail to have an effect. From June to October 1943, Steinbeck worked as a war correspondent for the Second World War. He witnessed the landing of the Allies in Italy and wrote reports about it as well as his diary notes under the title Once there was a War.

After the war, Steinbeck was highly influenced by an old friend, who was occupied as a marine biologist and showed him completely new perspectives to his environment. The scientist was often ‘used’ as a literary figure in his following works including ‘Cannery Row‘ and ‘The Log from the Sea of Cortez‘. Unfortunately, it was hard for Steinbeck to continue his success with his later works. He traveled through Scandinavia, France and Africa, gathering new energy inspiration for another masterpiece, ‘East of Eden‘, published in 1952, which tells the story of the Trask and Hamilton families from the Civil War to the First World War. 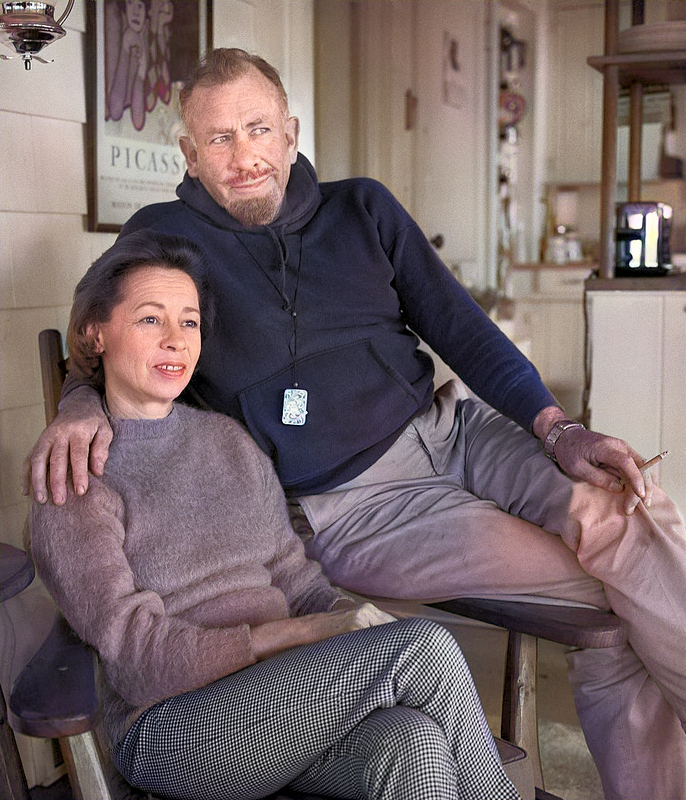 John and Elaine Steinbeck in 1950

After a stroke in 1959, Steinbeck decided to get to know his country once more. He traveled across the United States, writing about the American society and publishing another work titled ‘Travels with Charley: In Search of America‘ in 1962. The work is quite a mixture of Steinbeck’s reflection of the American culture, road trip stories, and a travel guide. The author wrote about the people he met and the conversations they had. On this day, the book gives a pretty good introduction to U.S during the 1960s. In the same year the book was published, Steinbeck was told that he will be awarded the Nobel Prize. Steinbeck won the Nobel Prize for literature for his “realistic and imaginative writing, combining as it does sympathetic humor and keen social perception.” The selection was heavily criticized, and described as “one of the Academy’s biggest mistakes” in one Swedish newspaper. The reaction of American literary critics was also harsh. However, in his acceptance speech later in the year in Stockholm, John Steinbeck said:

“..the writer is delegated to declare and to celebrate man’s proven capacity for greatness of heart and spirit—for gallantry in defeat, for courage, compassion and love. In the endless war against weakness and despair, these are the bright rally flags of hope and of emulation. I hold that a writer who does not believe in the perfectibility of man has no dedication nor any membership in literature.”
— Steinbeck Nobel Prize Acceptance Speech, 1962

In September 1964, President Lyndon B. Johnson awarded Steinbeck Presidential Medal of Freedom. John Steinbeck died in New York City on December 20, 1968, of heart disease and congestive heart failure. He was 66, and had been a lifelong smoker. Today, many of Steinbeck’s works are required reading in American high schools. A study by the Center for the Learning and Teaching of Literature in the United States found that Of Mice and Men was one of the ten most frequently read books in public high schools. Contrarywise, Steinbeck’s works also have been frequently banned in the United States. However, John Steinbeck is one of the most widely read American authors of the 20th century both inside and outside the USA.  His books, The Grapes of Wrath and Of Mice and Men, have been removed from public libraries several times because of their style and choice of words, and the American Library Association lists them as the most banned classics in North America.

Steinbeck cultivated a naturalistic and realistic style, which, however, did not shy away from echoes of the fantastic. His figures are often people on the margins of society, which he always portrays empathetically and sympathetically from their own point of view. Cannery Row’s staff, for example, is described by Steinbeck as follows:

“Whores, sons of whores, pimps, electricians and gamblers, in one word: people. One could also say with equal justification: saints, angels, believers, martyrs – it only depends on the point of view.”