You are here: Home › physics › John Randall and the Cavity Magnetron 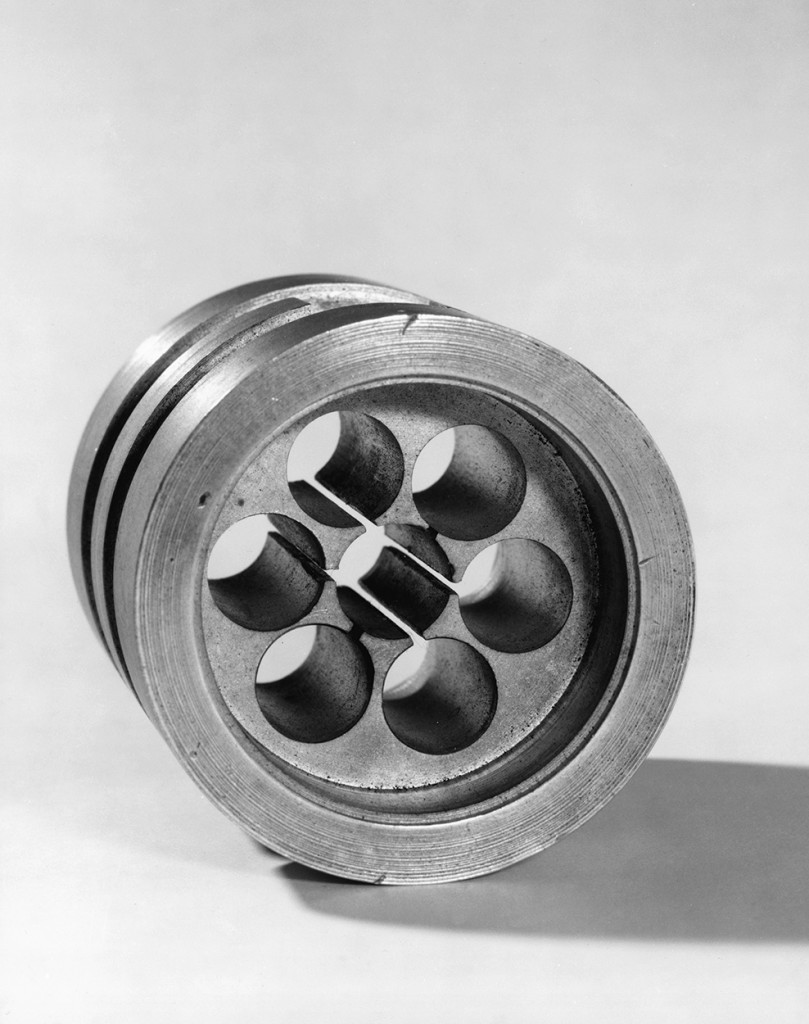 On March 23, 1905, British physicist and biophysicist Sir John Randall was born. Randall is credited with radical improvement of the cavity magnetron, an essential component of centimetric wavelength radar, which was one of the keys to the Allied victory in the Second World War. It is also the key component of microwave ovens. He also led the King’s College, London team which worked on the structure of DNA.

John Randall was born in Newton-le-Willows, Lancashire, UK, the only son and the first of the three children of Sidney Randall, nurseryman and seedsman, and his wife, Hannah Cawley, daughter of John Turton, colliery manager in the area.  John Randall was educated at the University of Manchester where he earned a first-class honors degree in physics and a graduate prize in 1925, and an MSc in 1926. In the same year, Randall started to work at the General Electric Company at its Wembley laboratories as a researcher. There, he took part in developing luminescent powders for use in discharge lamps and increased his enthusiasm for the mechanisms of such luminescence. After approximately 10 years, Randall became known as a leading figure in the field in Britain. He was awarded a Royal Society fellowship to the University of Birmingham.

The Electron Trap Theory of Phosphorescence

After the start of World War II, when Randall worked on the electron trap theory of phosphorescence in Professor Marcus Oliphant‘s physics faculty, the latter was approached by the Admiralty about the possibility of building a radio source that operated at microwave frequencies. Systems like these would allow radars to see small objects like the periscopes of submerged U-boats.

Microwaves and the Klystron

Marcus Oliphant first used klystron to generate microwaves. However, the device had several downsides. For instance they were low-power devices and if their power was increased there was another problem. Since the klystron was an amplifier, a low-power source signal was needed for it to amplify. John Randall and Harry Boot were appointed to work on these issues and produce a microwave oscillator. Oliphant asked them to explore miniature Barkhausen–Kurz tubes for this role, a design already used for UHF systems. The klystron effort soon plateaued with a device that could generate about 400 watts of microwave power, just enough for testing efforts.

Another microwave device known to the researchers back then was the split-anode magnetron. It could generate small amounts of power with low efficiency. However, there were many advantages in contrast to the klystron. Instead of encoding its signal in a stream of electrons provided by an electron gun, the magnetron used a conventional hot filament cathode, which seemed to offer a more likely path to higher power.

However, the existing magnetrons’ downside was their efficiency. The two researchers then made some adjustments and replaced the metal plates of the magnetron were replaced by resonators. As a result, the electrons would travel in a circle so they would pass by each of the resonators, generating microwaves much more efficiently than the plate concept. First tests of their new cavity magnetron design in February 1940 produced 400 watts, and within a week it had been pushed over 1.000 watts. Later on, the power was increased to 10 kW.

Radar and the DNA

In the end, the success of the magnetron revolutionized the development of radar, and almost all new radar sets from 1942 on used one. In 1944 Randall was appointed professor of natural philosophy at University of St Andrews and began planning research in biophysics on a small Admiralty grant. In 1946, he became head of the Department of Biophysics (now Randall Division of Cell and Molecular Biophysics) at the Medical Research Council at King’s College London, where Maurice Wilkins [4] (who was also his PhD student) and Rosalind Franklin [5] conducted research that led James D. Watson and Francis Crick [7] to discover the double-helix structure of DNA. John Randall himself worked on collagen. After retiring in 1970, he went to Edinburgh University, where he founded a research group. In 1946 he was elected a Fellow of the Royal Society (FRS) and was awarded their Hughes medal in the same year.

In 1951 John Randall set up a large multidisciplinary group working under his personal direction to study the structure and growth of the connective tissue protein collagen. Their contribution helped to elucidate the three-chain structure of the collagen molecule. Randall himself specialised in using the electron microscope, first studying the fine structure of spermatozoa and then concentrating on collagen In 1958 he published a study of the structure of protozoa. He set up a new group to use the cilia of protozoa as a model system for the analysis of morphogenesis by correlating the structural and biochemical differences in mutants. In 1962 he was knighted, and in 1972 he was elected a Fellow of the Royal Society of Edinburgh (FRSE).