You are here: Home › explorer › Mary Akeley and her Explorations in Africa 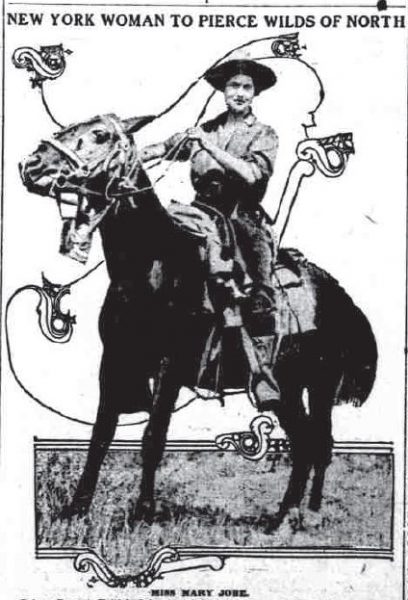 On July 19, 1966, American explorer and naturalist Mary Jobe Akeley passed away. Akeley was one of the earliest women explorers in Africa where she and her husband hunted and photographed animals during their natural history studies. She is the author of Carl Akeley’s Africa, published in 1929, Lions, Gorillas and Their Neighbors, published in 1932 and Congo Eden published in 1950.

Mary Jobe Akeley was the youngest daughter of Sarah Jane Jobe and Richard Watson. She attended Scio College in Alliance, Ohio, where she graduated in 1897. In 1901 she began to study English and History at Bryn Mawr College. In 1909 she began a Master’s degree at Columbia University. Parallel to her studies, she taught at the City University of New York and Temple University in Philadelphia..

Around 1905, Mary Akeley started exploring areas in British Columbia and she took part in an expedition led by Dr. Charles J. Shaw, exploring at Selkirk Mountains. By fall 1913, Akeley completed six trips exploring British Columbia and studying the Carrier Indians in their villages. She further was commissioned by the Canadian government to study the customs and history of Eskimos and Indian tribes in the Canadian Northwest. Mary Akeley explored areas of the Canadian Rockies, she mapped the Fraser River and managed to discover and map the back then unnamen and unexplored Mount Sir Alexander. She further made two successful attempts to ascend its peak. In 1914 she founded an outdoor summer camp for girls in Mystic, Connecticut, which was in operation until 1930.

In 1924, Mary Akeley married the naturalist and taxidermist Carl Ethan Akeley. In 1926, they traveled together to the Belgian Congo in order to connect specimens for the possibility of setting up a Gorilla sanctuary. Unfortunately, Carl died in 1926 and Mary Akeley continued to lead the expedition of 20 men. Akeley assumed the tasks of mapping regions of the Belgian Congo, Kenya, Uganda and Tanzania or Tanganyika as it was known then, as well as acquiring and preparing many of the specimens set to be displayed at the American Museum of Natural History. After returning to the United States, Mary Akeley was appointed adviser and actively raised funds for the Great African Hall of African Mammals in the American Museum of Natural History. The hall opened in 1936 and was named Akeley Hall to honor her husband.

In 1935 she set off on another expedition to explore animals in Kruger National Park and the living habits of the Zulu and Swazi. Between 1938 and 1941 she continued her research in Canada; in 1947 she returned to the Kruger National Park, where she also took extensive film shots this time.

Further, Mary Akeley was invited by Albert I of Belgium to enlarge the Albert National Park since renamed Virunga National Park, which she and her husband had worked to set up at Mount Mikeno. Akeley noticed that the danger that modern day hunting and cultural influences posed to the African wildlife and tribal customs. She crusaded for the establishment of game preserves and worked to safeguard the tribal customs of the pygmies. Akeley became involved in nature conservation and preservation as well as photography. In order to protect fragile ecosystems, Akeley declined to collect large numbers of specimens on many of her expeditions.

Akeley led an expedition through the Transvaal, Portuguese East Africa and Kruger National Park in order to study the wildlife and the zulus and Swazi people. She revisited Africa on request of the Belgian government and filmed many critically endangered African mammals on this trip in order to raise awareness about wildlife conservation before returning to the United States. Mary Akeley received the Cross of the Knight, Order of the Crown, for her work in Africa from Albert I of Belgium in 1928.[10] She was among the earliest women explorers in the Canadian Northwest and Africa.