You are here: Home › astronomy › Johannes Hevelius and his Selenographia

Map of the Moon engraved by astronomer Johannes Hevelius

On January 28, 1611, German astronomer Johannes Hevelius was born. From four years’ telescopic study of the Moon, using telescopes of long focal power, Hevelius compiled Selenographia (“Pictures of the Moon“, 1647), an atlas of the Moon with some of the earliest detailed maps.

Johannes Hevelius‘ father was a succesful merchant and pushed Johannes to follow his footsteps rather than pursue a scientific career. Hevelius was sent to Poland in order to study Polish. At the age of about 16, Hevelius begged his father to be able to continue a formal education and after he finally gave in, Hevelius fell in love with mathematics and astronomy. The young man also learned Latin and began drawing, engraving , and building instruments of wood and metal. His mentor was Peter Crüger, a reknowned mathematician, astronomer, and polymath, who encouraged Johannes Hevelius to take an active part in his observations. [1]

However, Hevelius realized that he had to follow his father’s wishes and start taking care of his family, as he was the only son. He undertook the necessary studies of the customs and laws of the city and settled down to pursue a career as a businessman. The turning point came around 1639, when Johannes Hevelius visited his old mentor Crüger, who deeply advised his best student not to give up astronomy. Also, Hevelius was again motivated to study his beloved astronomy after he observed an eclipse of the sun which occurred on 1 June 1639. The now married man Hevelius spent every second of his leisure time with astronomy while his wife, Katharina, agreed to take over much of the administrative work associated with the family’s brewery. He started again to grind lenses for telescopes and making mounts for quadrants and sextants. Hevelius also corresponded much with the European leaders of astronomy. [2]

In 1641 he built an observatory on the roofs of his three connected houses, equipping it with splendid instruments, ultimately including a large Keplerian telescope of 46 m (150 ft) focal length, with a wood and wire tube he constructed himself. This may have been the longest “tubed” telescope before the advent of the tubeless aerial telescope. The observatory was known by the name Sternenburg or “Star Castle“. This private observatory was visited by Polish Queen Marie Louise Gonzaga in 1660. As a subject of the Polish kings, Hevelius enjoyed the patronage of four consecutive kings of Poland, and his family was raised to the position of nobility by the King of Poland Jan Kazimierz in 1660, who previously visited his observatory in 1659. 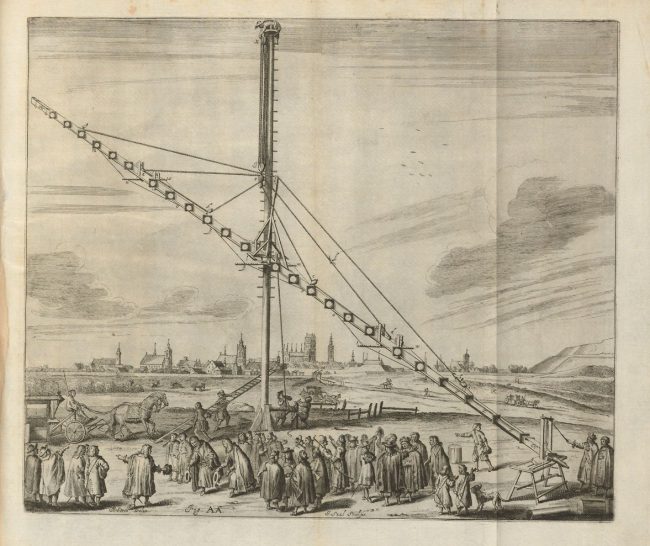 Hevelius’ famous text Selenographia was published in 1647 and included 60 drawings of the moon’s surface. For his accomplishment, Hevelius was praised all over Europe, and his maps were considered the best for over a century. Once, English traveler Mundy is believed to have written in his diary:

Of the Moone he hath Made above 30 large mappes, prints, or Copper peeces of the Manner of every daies encrease and decrease, deciphering in her land and sea, Mountaines, valleies, Ilands, lakes, etts., making in another little world, giving Names to every part, as wee in a mappe of our world.

In his treatise Hevelius reflected on the difference between his own work and that of Galileo Galilei. Hevelius remarked that the quality of Galileo’s representations of the Moon in Sidereus nuncius (1610) left something to be desired. Selenographia was dedicated to king Wladyslaw IV and along with Riccioli/Grimaldi’s Almagestum Novum became the standard work on the Moon for over a century.

After the tragic death of his wife, Johannes Hevelius married Catherina Elisabetha Koopman, who was deeply interested in astronomy and contributed to Hevelius’ studies with mathematical calculations and observations. He was elected to the Royal Society of London in 1664. The Royal Society considers him one of the first German fellows. In May 1679 the young Englishman Edmond Halley visited him as emissary of the Royal Society.[5] Halley had been instructed by Robert Hooke and John Flamsteed to persuade Hevelius to use telescopes for his measurements, yet Hevelius demonstrated that he could do well with only quadrant and alidade.[6,7] He is thus considered the last astronomer to do major work without the use of a telescope.

In 1679, Hevelius faced another tragedy. During a fire, his observatory, as well as his instruments and books were completely destroyed. However, the old man apparently did not even think of giving up, but promptly began to repair the damage, being able to observe the Great Comet of 1680. Johannes Hevelius passed away on his 76th birthday on January 28, 1687. [2,3]

At yovisto, you may be interested in a video lecture by Ross Beyer, who talks about “Making maps to explore the Earth, Moon, and Mars“.