On January 27, 1687, German architect and military artillery engineer Balthasar Neumann was born. Neumann developed a refined brand of Baroque architecture, fusing Austrian, Bohemian, Italian, and French elements to design some of the most impressive buildings of the period, including the Würzburg Residence and the Basilica of the Fourteen Holy Helpers (called Vierzehnheiligen in German). By the way, it’s about time to write about Balthasar Neumann, since he has built several significant landmarks of my home region Franconia in Bavaria.

Balthasar Neumann was born in Eger, Bohemia, as the seventh of nine children of the clothier Hans Christoph Neumann († 1713) and his wife Rosina Grassold and baptized on 30 January 1687 in the church St. Niklas in Eger. He probably spent his first apprenticeship with his godfather, the bell and metal founder Balthasar Platzer in Eger. Since 1711 he has been employed in the foundry of Ignaz Kopp in Würzburg, where he also acquired the apprenticeship certificate of “Büchsenmeister, Ernst- und Lustfeuerwerkerey“.

In 1712 Neumann joined the Franconian district artillery as a commoner, as this was the only way he could pursue the career of an engineer, which was only open to military personnel. Since 1714 he has been in the service of the Würzburg Hochstift. In 1715 he became an ensign of the princely body company of the Prince Bishop’s Würzburg Army and in his third year of study of geometry, architecture and surveying. He perfected his knowledge by studies in the field of fortress construction, rose to the rank of adjutant, soon became sergeant of the artillery in the castle company and in 1718 princely captain of engineering. In 1717/18 he was with the Frankish troops in Austria and Hungary, where he probably worked as an engineer in the fortification of Belgrade. In Vienna he also became acquainted with the trend-setting baroque buildings of Johann Bernhard Fischer von Erlach and Johann Lucas von Hildebrandt and trained his architectural intuition on them. A trip to Milan probably also brought him into contact with the works of Guarino Guarini, which became decisive for his later ingenious conception of space.

After Neumann had worked in Würzburg under the direction of the artillery captain and engineer Andreas Müller (1667-1720) and the princely master builder of the town and country, Joseph Greissing, the new Prince Bishop Johann Philipp Franz von Schönborn appointed the Captain (Stückhauptmnann) of the artillery and chief engineer Neumann as Prince Bishop’s building director in Würzburg in 1719. As such, Neumann finally took over the planning for the new building of the Würzburg Residence in 1720. In doing so, the Würzburg prince bishop followed the recommendation of his uncle, the Elector of Mainz, Lothar Franz von Schönborn, who had already noticed the ambitious talent of the master builder in 1715.

Space and How to make Use of it

During these first years Neumann trained his understanding of architecture in cooperation with other architects in the service of the Würzburg monastery, such as Maximilian von Welsch, the von Erthal brothers, and Ritter zu Gronesteyn, through whom he came into contact with the French early classicism period of Mansart. However, his confrontation with the Viennese master Johann Lucas von Hildebrandt had a decisive influence on his style. In connection with the construction of the residence, he undertook a study trip on behalf of his prince-bishop’s employer, which took him to Paris via Mannheim, Bruchsal, Strasbourg and Nancy in 1723. Here, in contact with Robert de Cotte, the French king’s first architect, he consolidated the groundbreaking ideas of new spatial dispositions. In Paris, together with Germain Boffrand, the other of the great French architects, Neumann further developed his ideas of a spacious staircase, which later made him famous. In 1724 he advanced to the rank of major. Two of Neumann’s maxims in the construction of churches were “rotunda” and “curved space”. He was satisfied only with perfect solutions that included all suggestions. 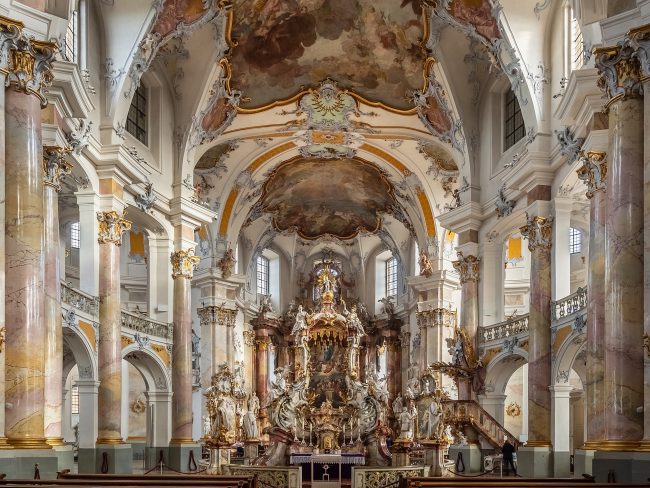 Side altar in the Basilica Vierzehnheiligen, Ermell [CC BY-SA (https://creativecommons.org/licenses/by-sa/4.0)]

Military Career and the “Bauwurm”

In 1729 he became a lieutenant colonel in the Franconian district artillery and, in place of Maximilian von Welsch, construction director in Bamberg, the second diocese of the new Würzburg Prince-Bishop Friedrich Karl von Schönborn. In 1731 he received the newly established chair for civil and military architecture at the University of Würzburg and became colonel in 1741, achieving the highest possible military rank for him. Due to the policy of the Schönborn family, obsessed by the “Bauwurm” (construction worm), to occupy as many dioceses as possible with members, Neumann’s sphere of activity from Würzburg and Bamberg eventually extended to the dioceses of Speyer, Konstanz and Trier, and even the Cologne Elector Clemens August von Wittelsbach gave him commissions. Balthasar Neumann supplied Würzburg with canals, channelled fresh spring water into the four-tube well and laid out new streets

From 1723 Neumann was a member of the episcopal building commission, which he effectively headed from 1725. As construction director of the cathedral chapter, he achieved a dominant position in Würzburg’s building industry, even after he had temporarily lost his office as senior building director under Schönborn’s successor Anselm Franz von Ingelheim. In addition, he was also a successful self-employed entrepreneur, operating the Schleichacher Glass Works in Steigerwald and a mirror grinding shop in Würzburg. He not only supplied his own buildings with his products, but also exported them to other countries. Neumann also drew designs for residences in Stuttgart (1747-1749) and Karlsruhe (1750/51) and for Schwetzingen (1752).

Garden façade of the Residence, leading into the Court Gardens

The Würzburg Residence is probably the most famous of Balthasar Neumann’s works. The palace is one of the major works of the South German Baroque period and is regarded in the European context as one of the most important residential buildings of the Late Baroque. It is thus in a row with Schönbrunn in Vienna and Versailles Palace near Paris. The foundation stone of the new Würzburg Residence was laid under Prince Bishop Johann Philipp Franz von Schönborn in May 1720, and Johann Philipp, unpopular with the people because of his high tax burden, died as early as 1724 without ever having moved into “his” palace, of which until then only parts of the north wing had ever stood. His successor, Christoph Franz von Hutten, had the first four-wing block around the front northern courtyard of honour of the north wing completed during the following five years (1724-1729) of his reign. The construction work was only fully resumed under the brother of the first builder, Prince Bishop Friedrich Karl von Schönborn, reigned 1729-1746. Under the next prince-bishop, Adam Friedrich von Seinsheim, reigned 1755-1779, the residence was completed. The total construction cost came to over 1.5 million guilders, at a time when a day labourer could expect a weekly wage of one guilder.

Balthasar Neumann died on August 19, 1753 in Würzburg as a colonel of the artillery and prince-bishop’s chief building director and was buried in the Marienkapelle in Würzburg. The abbey church of Neresheim, which he had begun, and the unfinished basilica of Vierzehnheiligen were completed by other master builders. Overall, Balthasar Neumann created around 100 important bridges, churches, monasteries, castles, residential and commercial buildings.