You are here: Home › philosophy › Johann Valentin Andreae and the Legend of the Rosicrucians 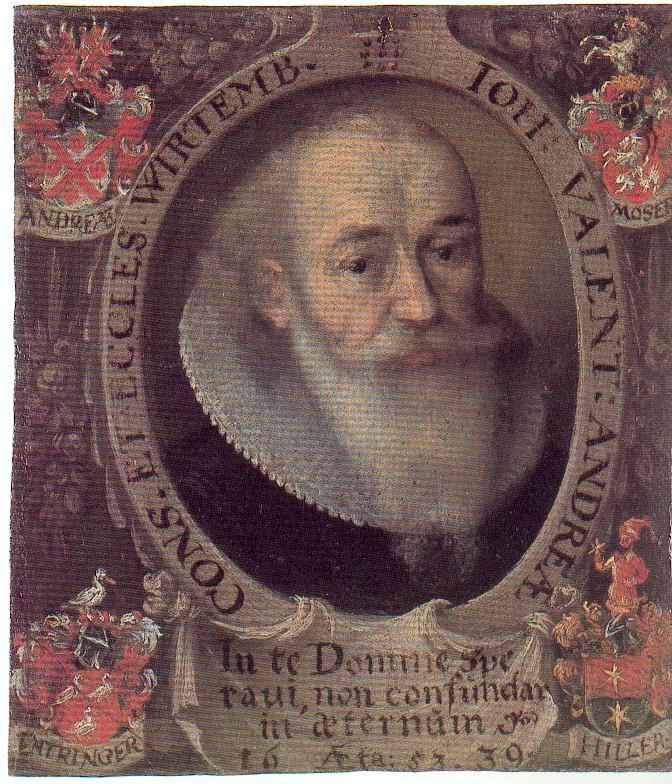 On August 17, 1586, German theologian and author Johannes Valentinus Andreae  was born. He claimed to be the author of the Chymische Hochzeit Christiani Rosencreutz anno 1459 (1616, Strasbourg, the Chymical Wedding of Christian Rosenkreutz), one of the three founding works of Rosicrucianism, a philosophical secret society said to have been founded in late medieval Germany by Christian Rosenkreutz. Rosicrucianism holds a doctrine or theology “built on esoteric truths of the ancient past“, which, “concealed from the average man, provide insight into nature, the physical universe and the spiritual realm.”

Are you interested in conspiracy theories? Then, for sure you will have heard about the Rosicucians. At least since authors such as e.g. Umberto Eco or Dan Brown are writing about historical conspiracies, the Rosicrucians – as well as the illuminati – have gained attention again, although no ordinary reader really knows about their historical origins. Now, the Rosicrucians were a secret philosophical society of the 17th century. They were named after Christian Rosencreutz, the legendary, perhaps allegorical, founder of the Rosicrucian Order, presented in the three Manifestos published in the early 17th century. The first anonymous public document on the Rosicrucian Order is the Fama Fraternitatis Rosae Crucis, which appeared in 1614 in Kassel (Germany), introducing the pilgrim founder “Frater C.R.C”, followed in 1615 by the Confessio Fraternitatis. In 1616 the Chymical Wedding of Christian Rosencreuz appeared in Strasburg, which discloses for the first time the founder’s name as Christian Rosencreutz.

“What looms ahead or rather what has to be done is the reprise of the wonder chambers. Johann Valentin Andrea, the founder of the Rosicrucians, once advocated an archive that would include not only artworks, tools, and instruments, but also their technical drawings. Under today’s high-tech conditions we have no choice but to start such an archive or endorse millions of anonymous ways of dying.” ( Kittler, Friedrich Adolf.)

The Legend of Christian Rosencreutz

According to legend, Christian Rosencreutz was a scholar or doctor who discovered and learned esoteric wisdom on a pilgrimage to the Middle East among Turkish, Arab and Persian sages supposedly in the early 15th century. When he returned home, he founded the “Fraternity of the Rose Cross” with himself (Frater C.R.C.) as Head of the Order. Under his direction a Temple, called Sanctus Spiritus, or “The House of the Holy Spirit“, was built. It is described that his dead body was discovered by a fellow brother in a perfect state of preservation, 120 years after his death – as Rosencreutz had predicted – in a heptagonal chamber erected by himself as a storehouse of knowledge. Some occultists including have stated that Rosencreutz later reappeared as the Count of St. Germain, a courtier, adventurer, and alchemist who reportedly died on February 27, 1784. Others believe Rosencreutz to be a pseudonym for a more famous historical figure, usually Francis Bacon.[9]

During Rosencreutz’s lifetime, the Order was said to consist of no more than eight members, each a doctor and a sworn bachelor. Each member undertook an oath to heal the sick without payment, to maintain a secret fellowship, and to find a replacement for himself before he died. In his autobiography, Johannes Valentinus Andreae claimed the anonymously published the Chymical Wedding of Christian Rosencreutz as one of his works, and he subsequently described it as a ludibrium, a ‘playful trivial game’ possibly meaning “lampoon”. In his later works, he makes alchemy an object of ridicule and places it with music, art, theatre and astrology in the category of less serious sciences.

Johann Valentin Andreae was born at Herrenberg, Württemberg, the son of superintendet Johannes Andreae, later the abbot of Königsbrunn and Maria Moser, a widow and was court apothecary. As being a descended from a tradition of influential theologians, young Andreae studied theology and natural sciences in Tübingen and showed a profound interest in esotericism. His father’s involvement in alchemy and his mother’s knowledge of pharmaceuticals contributed to Andreae’s fascination with alchemy and pharmacology. In poor health as a child, Andreae received his early education at home. Later, he received an extensive classical education in literature, science, and mathematics, earning a baccalaureate in 1603 and a master of arts in 1605. Involvement in some student affair in violation of the university regulations caused him to be expelled in 1607, and he began five years of extensive travel interrupted by periods of residence and study in Tübingen and employment as a private tutor for young nobles.

According to his own account, at about 1605 he wrote the first version of “The Chymical Wedding of Christian Rosecreutz“. On his travels, he visited Dillingen, a bastion of the Jesuits, whom he regarded as the Antichrist. Andreae became strongly indebted to Christoph Besold, an associate of the astronomer Johannes Kepler,[10] who, although his subject was jurisprudence, took all knowledge for his province. Widely learned in languages, including Hebrew and most probably Arabic, Besold read medieval philosophy, the Renaissance humanists, and the German mystics of the later Middle Ages, and admired Paracelsus, Ramón Lull, Nicholas of Cusa, and Pico della Mirandola. It was of great importance to Andreae that he had the use of Besold’s extensive library.

In 1612 Andreae resumed his theological studies in Tübingen. After the final examination in 1614, he became deacon in Vaihingen an der Enz, and in 1620 priest in Calw. In retrospect, Andreae justifies his part in the creation of the Order of the Rosicrucians, which now has a widespread following in Europe, as a youth sin. In Vaihingen Andreae wanted to implement a radical program to overcome lack of discipline and poverty. Careful youth instruction and the introduction of church discipline were to combat immorality, cursing, drunkenness, marital and neighborhood disputes, and the desacration of Sunday. The Ten Commandments became the legal basis, judges were the pastor and mayor along with some respected citizens.

Here he reformed the school and social institutions, and established institutions for charity and other aids. To this end, he initiated the Christliche Gottliebende Gesellschaft (“Christian God-loving Society“). He obtained funds and brought effective help for the reconstruction of Calw, which was destroyed in the Battle of Nördlingen (1634) by the imperial troops and visited by pestilence. In 1639, he became preacher at the court and councilor (Konsistorialrat) in Stuttgart, where he advocated a fundamental church reform. He became also a spiritual adviser to a royal princess of Württemberg. Suffering many disappointments in his efforts for the church and in failing health, he withdrew to Bebenhausen as bishop and abbot of the evangelical monasterial school of Adelberg in 1650. Johann Valentin Andreae died in 1654 in Stuttgart.

Andreae’s most important work is his Christian utopia Christianopolis, published in 1619, a key text of the utopian genre, which, following the model of Thomas More’s Utopia, freely creates a Protestant ideal society: Its constitutional principle is fear of God, everyone has access to the observatory so that faith can be scientifically fertilized, in the church instructive plays are performed. Participation in church services is a matter of course, luxury and elaborate dresses are immoral. A “practical Christianity” is realized in Christian love and charity, science and technology are subject to ethical goals and serve the welfare of people.

Andreae’s contribution to the creation of the Rosicrucian legend is controversial. Researchers largely agree that he is the creator of the Rosicrucian myth with the figure of Christian Rosencreutz and his order. The basic idea of the Order was that leading scientists together form an active society so that science, Christianity and ethics do not fall apart. The name and symbol Christian Rosencreutz’ are based on the coat of arms of the Andreae family, the figure itself unites character traits of Martin Luther, Paracelsus and the scientifically authoritative philosophers of antiquity. In research it is discussed that Andreae contributed to the myth, but the announcement of a reformation in his story Chymische Hochzeit is not to be understood as a program. In later years Andreae distanced himself from his writing and openly ridiculed alchemy in treatises such as Fama fraternitatis, which, along with music, art, theatre and astrology, were among the less serious sciences.