You are here: Home › politics › Joan of Arc, the Maid of Orleans

Entrance of Joan of Arc into Reims in 1429, painting by Jan Matejko

On May 30, 1431, Joan of Arc aka the Maid of Orleans was burned at the stake. Joan of Arc is considered a heroine of France for her role during the Lancastrian phase of the Hundred Years’ War, and was canonized as a Roman Catholic saint.

Joan of Arc – A Girl in the Hundred Years’ War

Joan of Arc was probably born around 1412. She did not lean to read and write, but her mother sparked the young girl’s interest in the church and its teachings. In the meantime, the conflicts with England increased. In 1420, a peace treaty disinherited the French crown prince, Charles of Valois, amid accusations of his illegitimacy, and King Henry V was made ruler of both England and France. Henry VI succedes him in 1422. Since England occupied large parts of northern France, many in Joan’s village called Domrémy had to leave their homes. 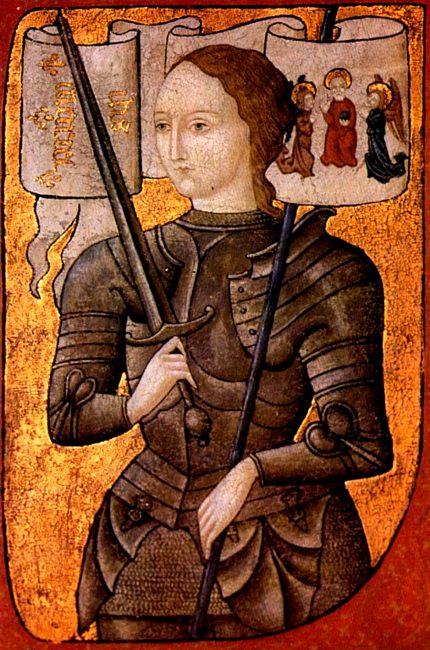 Around the age of 13, Joan claimed to have heard voices, which she believed to have been sent by God in order to give her important missions. Joan of Arc was to save France by expelling its enemies and to install Charles as its king. Around May 1528, Joan of Arc made her way towards Vaucouleurs, where most people were loyal to Charles. People began believing that she was the virgin able to save France. She started to dress in men’s clothes and began an 11-day journey across enemy territory towards Chinon, the site of the crown prince’s palace.

Give me an Army

Joan asked Charles to give her an army to lead to Orléans, then under siege from the English. She set off in march 1429 with white armor and a white horse. She led French assaults against the enemy, driving Anglo-Burgundians from their bastion and forcing their retreat across the Loire River. 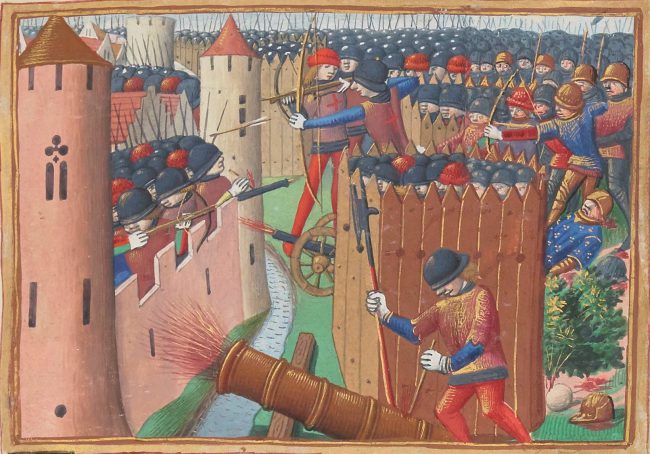 Late 15th-century depiction of the siege of Orléans of 1429, from Les Vigiles de Charles VII by Martial d’Auvergne

Joan’s reputation spread widely. She then escorted Charles to Reims, taking towns that resisted by force and enabling his coronation as King Charles VII in July 1429. The Anglo-Burgundians were able to fortify their positions in Paris, and turned back an attack led by Joan in September. In 1430, Joan was ordered to confront a Burgundian assault on Compiégne. However, she was thrown off her horse and was taken captive by the Burgundians. During the trial she faced, Joan of Arc answered numerous charges including witchcraft, heresy, and dressing like a man. The trial for heresy was politically motivated. The trial record contains statements from Joan that the eyewitnesses later said astonished the court, since she was an illiterate peasant and yet was able to evade the theological pitfalls the tribunal had set up to entrap her. The transcript’s most famous exchange is an exercise in subtlety: “Asked if she knew she was in God’s grace, she answered, ‘If I am not, may God put me there; and if I am, may God so keep me.‘” The question is a scholarly trap. Church doctrine held that no one could be certain of being in God’s grace. If she had answered yes, then she would have been charged with heresy. If she had answered no, then she would have confessed her own guilt.

Condemned and Sentenced to Die

At the trial in 1431 she was condemned and sentenced to die. British mediaevalist Beverly Boyd described Joan’s trial as so “unfair” that the trial transcripts were later used as evidence for canonizing her in the 20th century. In order to distance himself from these serious charges, the French king never attempted to negotiate Joan’s release.

Burned at the Stake

After one year in captivity, Joan of Arc signed a confession denying that she had ever received divine guidance. However, a few days later she defied orders by again donning men’s clothes, and authorities pronounced her death sentence. On May 30, 1431, Joan of Arc was taken burned at the stake. Eyewitnesses described the scene of the execution: Tied to a tall pillar at the Vieux-Marché in Rouen, she asked two of the clergy, Fr Martin Ladvenu and Fr Isambart de la Pierre, to hold a crucifix before her. An English soldier also constructed a small cross that she put in the front of her dress. After she died, the English raked back the coals to expose her charred body so that no one could claim she had escaped alive. They then burned the body twice more, to reduce it to ashes and prevent any collection of relics, and cast her remains into the Seine River.

“You say that you are my judge. I do not know if you are! But I tell you that you must take good care not to judge me wrongly, because you will put yourself in great danger. I warn you, so that if God punishes you for it, I would have done my duty by telling you!”
– Joan of Arc’s warning to Bishop Cauchon (15 March 1431)

However, her fame even increased after her death. Around 20 years later, Charles VII cleared her name. In 1920, Benedict XV canonized her.

Ann Astel, Joan of Arc at the University: God, Country, and Notre Dame, [9]