You are here: Home › communication › Johann Carolus and the First Newspaper 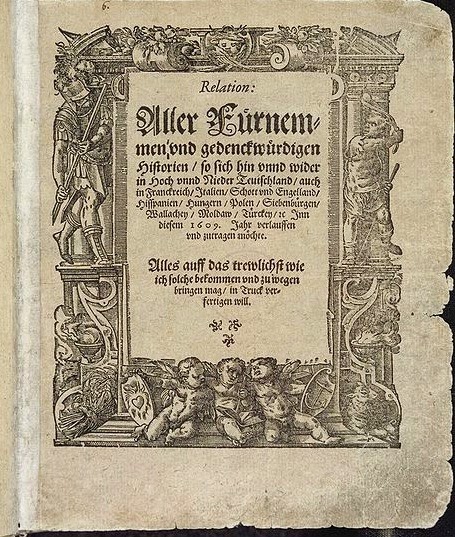 Most likely in late September 1605, the very first weekly printed newspaper was published by Johann Carolus in Straßburg, the contemporary boomtown of printing.

Not much is known about Johann Carolus’ life or his way of becoming a publisher. Carolus was probably born on 26 March, 1575 and was taught mostly by private teachers in Straßbourg. The well young educated man was then apprenticed as a bookbinder. Carolus’ career basically started with his marriage to Anna Fröhlich. The woman not only became his partner for life but also his supporting business partner. Also, Carolus achieved the city’s right to found a company through the marriage. Only two years after their marriage, the young couple purchased a house. It was recorded that in their contract, Carolus already identified himself as “Buchführer”, meaning that he already was some sort of bookseller. It is also assumed that at this point, Carolus was often thinking of giving up the bookbinding entirely.

Even though, Carolus and his wife were highly in debt already, they made another huge investment in July 1604. For the very large amount of 3.724 Gulden, they acquired Straßburg’s biggest printing house, which originally belonged to Thobias Jobin. It included three big printing presses, letters, a big load of paper as well as a whole warehouse full of unbound books. Carolus became widely known as a very brilliant businessman and he managed to even hire seven employees very soon after the investment.

Still, the pressure on the young businessman increased and he had to think of new ways to guarantee a financial stability for his company. In 1604, Carolus started to deliver a very small amount of weekly news, which where copied by hand to a few people of the upper class. One year later, Carolus had another brilliant idea when he came to think that a much greater amount of people would like to read the weekly news. In order to reach more people, Carolus had to change the production procedure and figured out that he had to print and sell an enormous amount of newspapers in order to make profit. This was very risky since Carolus had no idea if that many people were willing to pay for it. Fortunately for him, the business model was very successful and he printed four to six pages every week. The first weekly printed newspaper was born and was titled ‘Relation aller Fürnemmen und gedenckwürdigen Historien‘. At the beginning, Carolus was the only editor of the newspaper and later on he was helped by a theologian.

However, Carolus faced trouble after about three years of publishing. He published the news about financial difficulties of the government and only two days later it was decided that Carolus had to be more careful and before publishing anything critical, he was advised to consult the government. This became known as the first censorship incidence. After these conflicts, Carolus openly announced that more censorship in the future would may cause financial difficulties for his business. Carolus then started to censor his own articles and his business stayed successful.

If a newspaper is defined by the functional criteria of publicity, seriality, periodicity, and currency or actuality (that is, as a single current-affairs series published regularly at intervals short enough for readers to keep abreast of incoming news) then Relation was the first European newspaper. Using a single criterion of “format” rather than frequency and function, however, English historian of printing Stanley Morison held that the Relation should be classified as a newsbook, on the grounds that it still employed the format and most of the conventions of a book: it is printed in quarto size and the text is set in a single wide column. By Morison’s definition, the world’s first newspaper would be the Dutch Courante uyt Italien, Duytslandt, &c. from 1618. However, the Relation was published until 1659 and is recognized by the World Association of Newspapers as the first newspaper in the world.