You are here: Home › physics › Jan van Eyck – the King among the Painters 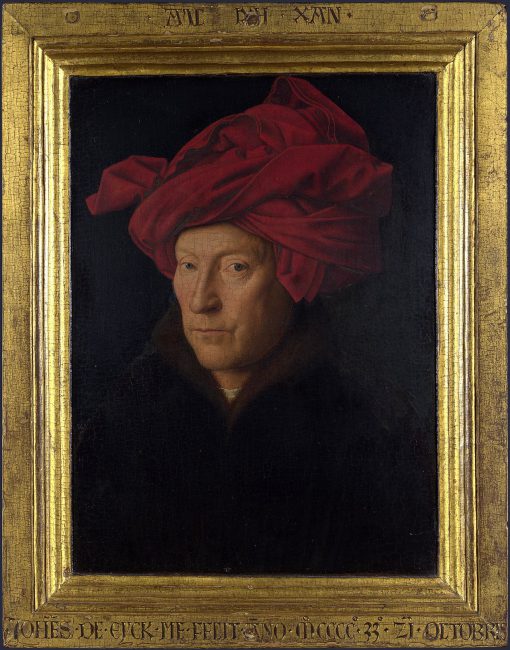 On July 9, 1441, Dutch painter Jan van Eyck passed away. He was one of the early innovators of what became known as Early Netherlandish painting, and one of the most significant representatives of Early Northern Renaissance art. He initiated the new naturalistic art epoch north of the Alps. Because of his perfect painting technique and his sense for a true-to-life representation, he was even called “king among painters” by many authors.

Not much is known about the Artist’s Youth

Jan van Eyck was born around 1390 in Maaseik, a borough of the prince-bishopric of Liège. His youth lies in the dark, despite intensive research. Although the sources are better from 1422, the knowledge about his works remains incomplete. This is aggravated by the fact that a large part of his work is no longer preserved. With whom van Eyck was apprenticed is unknown. He produced his early works in the style of a book painter (illuminator). He was first mentioned in a document in 1422, when he entered the service of Duke John of Bavaria, Count of Holland. His position was that of a valet de chambre, and he worked from then on as court painter for the painting of the inner courtyard of the residence at The Hague.

After the duke’s death in 1425, van Eyck found employment with Philip the Good. His reputation as a painter had brought him to the most splendid court in Europe at that time, namely to Lille, because he had been hired on the basis of his abilities, “of which the duke had heard through persons in his service and which he also recognized in the person of Jan van Eyck“. His contract was limited to one year, but the renewal clause meant that van Eyck remained at the court of Philip III for many years. His duties were not limited to painting portraits and decorating princely residences, but he was also responsible for designing distinguished courtly dress, jewelry for festive ceremonies, or for organizing tournaments and other festivities. Other tasks included painting shields, banners and setting statues. 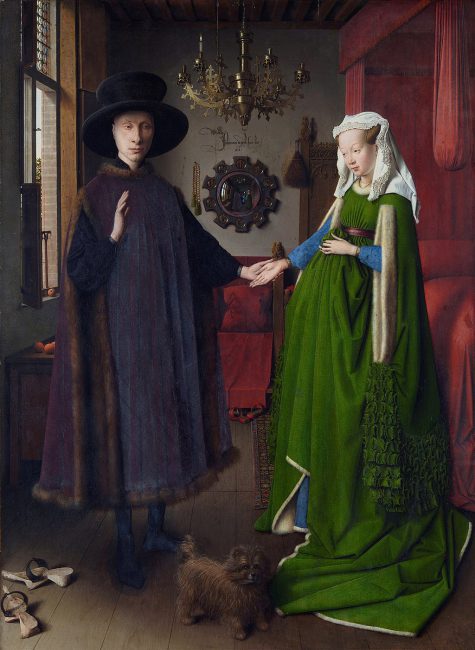 In addition to painting, Jan van Eyck also fulfilled diplomatic commissions. Philip sent him on several foreign trips within ten years. During one of these missions, he attended a feast of St. Luke in Tournai on October 18, 1426. It is believed that here he met the artists Robert Campin, Rogier van der Weyden and Jacques Daret. In 1427 he traveled to Valencia, after which he was part of a delegation to Portugal (1428) that proposed on Philip’s behalf to King John I’s daughter, Isabella. Jan van Eyck painted the Infanta so that his master could get a picture of his future bride. From 1430 until his death he was again active in Bruges. 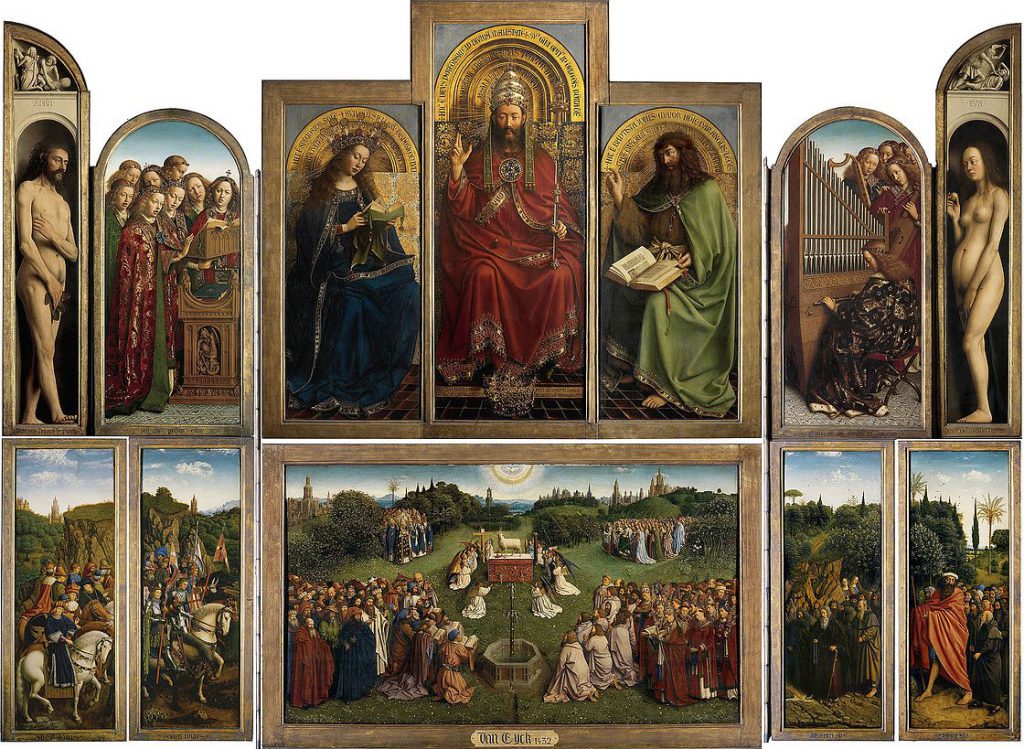 Undoubtedly his main work, however, is the Ghent Altarpiece of about 1435, which he is said to have begun with his supposed brother Hubert van Eyck. This polyptych is a masterpiece of fine painting and the largest known work of Old Netherlandish painting. 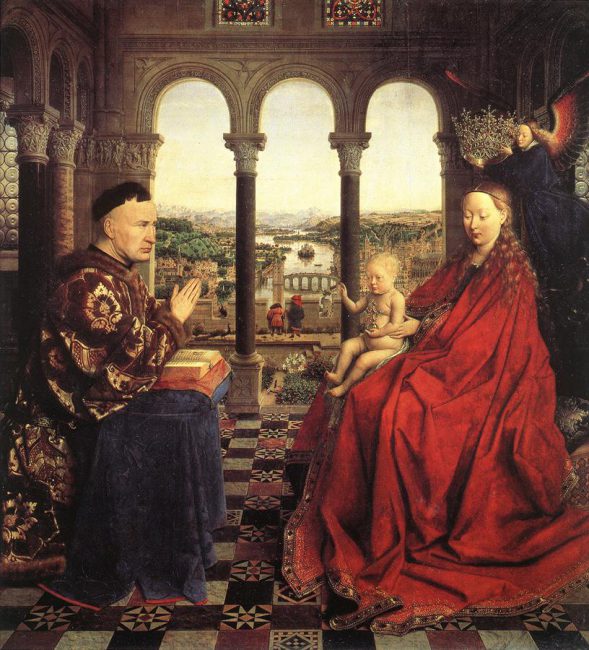 From this time on he also worked for private clients. For the chancellor Nicolas Rolin he painted a Madonna with the praying founder of the painting as her counterpart, depicted in the style of a ‘silent devotion’. For the city of Bruges, he created six gilded statues intended for the facade of the City Hall. In 1433 he married Margaret and bought a house in the court and embassy district of Bruges. Philip the Good paid his respects to the artist by sponsoring one of van Eyck’s two children. In 1436 he went on his last secret mission. After sixteen years of service to the duke, van Eyck died in 1441 in Bruges, where he was buried on July 9 in the church of Sint-Donaas. 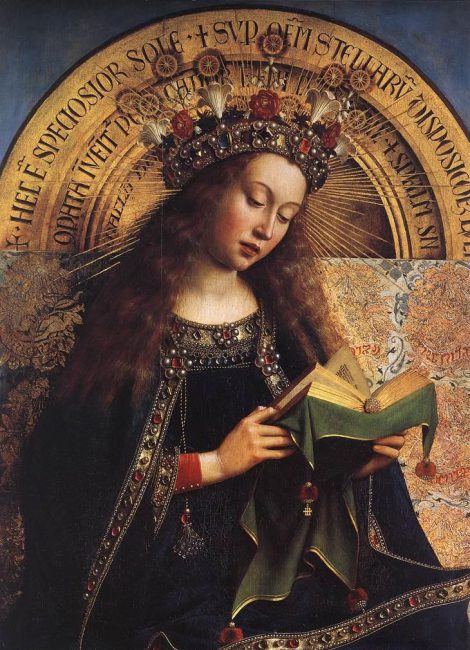 With the works of Jan van Eyck, Robert Campin and Rogier van der Weyden, a new era of painting began, characterized by lovingly realistic depictions of detail. Since many of the paintings are of religious content, depicting saints, the realistic depiction brings “the sacred into the home” and allows the viewer a new immediacy in accessing the religious. In terms of painting technique, van Eyck also ushered in a new era. He frequently used oil paints in addition to the traditional tempera and aqueous distemper systems. Giorgio Vasari [1] described Jan van Eyck as the inventor of oil painting, but this is not correct, because oil resin painting was also known earlier and among the barrel painters, that is, those who gilded or painted wooden works of art. Jan van Eyck, however, was probably the first painter to use siccative and bleached oils (for corrections), to show the potential of oil painting through its new coloration with its manifold nuances within panel painting, and to apply it to a greater extent. His works were of fundamental importance in overcoming medieval traditions in European painting and can be found in all major museums. Van Eyck was the only 15th-century Netherlandish painter to sign his canvases. The habit of signing his work ensured that his reputation survived, and attribution has not been as difficult and uncertain as with other first generation artists of the early Netherlandish school.