You are here: Home › art › Jacques de Vaucanson and his Miraculous Automata 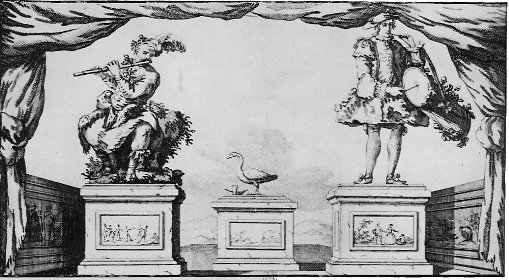 Three of Jacques de Vaucanson’s automata: the Flute Player, the Digesting Duck and the Tambourine Player

On February 24, 1709, French inventor and artist Jacques Vaucanson was born, who is best known for the creation of impressive and innovative automata and machines such as the first completely automated loom.

“Without the voice of le Maure and Vaucanson’s duck, you would have nothing to remind you of the glory of France.” – Voltaire

Jacques de Vaucanson was born in Grenoble, France. He grew up in a poor family, his father was occupied as a glove maker and Jacques himself wanted to become a clockmaker. He was educated by Jesuits but even though he had high interest in religious studies, he always preferred working on mechanical devices. A big influence to Vaucanson depicted the medical surgeon Le Cat, who taught him in anatomy, wherefore it became easier constructing devices that would mimic biological functions. 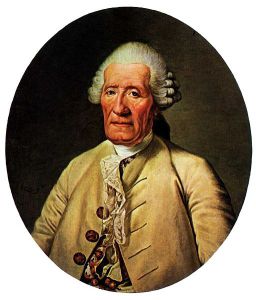 But Vaucanson was not the first, interested in building automata. Constructions of these kind are known to have exist in the ancient Greece, like the Antikythera mechanism,[4] which was designed to work out astronomical positions. In the 8th century, some wind powered automata were built and polymath Al-Jazari constructed several devices automatically playing music or automatic hand washing devices still in use today (for flush toilets). In the Renaissance, many clockwork automata were designed and built and France depicted the most important area for mechanical toys.

Jacques de Vaucanson opened his first workshop in Lyon at the age of 18 and was therefore at the right location to improve his skills and find sympathizers. His duty in Lyon was to build various machines for a nobleman, but unfortunately, his efforts were not appreciated by everyone. When a group of governmental officials came to the city, he built several androids that would serve dinner and perform other helping tasks through the evening, but after that night his machines were declared foolish and were to be destroyed.

However, the talented creator of automata Vaucanson continued his work and created the famous biomechanical automation ‘The Flute Player‘. The life-sized figure from 1737 was able to perform twelve songs. For this machine, Vaucanson received at least some kind of recognition. He presented his work to the Académie des Sciences in 1738 where the flute player was considered a toy but still a revolutionary of its kind. Johannes Joachim Quantz, back then court musician and long-time flute instructor to Frederick II of Prussia, discussed the shortcomings of Vaucanson’s mechanical flute player. For instance, he discussed the inability to correctly move the lips which resulted in the necessity of increasing the wind pressure for the upper octaves. 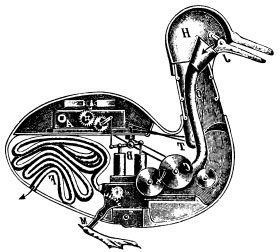 The famous ‘Digesting Duck‘ by Jacques de Vaucanson was unveiled on May 30, 1739 in France and consisted of more than 400 moving parts. The Duck was the size of a living duck, and was cased in gold-plated copper. As well as quacking and muddling water with its bill, it appeared capable of drinking water, and of taking food from its operator’s hand, swallowing it with a gulping action and excreting what appeared to be a digested version of it. The creator himself referred to his device’s interior as a small chemical laboratory which was able to break down the grain. However, while Vaucanson’s duck supposedly demonstrated digestion accurately, his duck actually contained a hidden compartment of pre-“digested” food, so that what the duck defecated was not the same as what it ate. The duck would eat a mixture of water and seed and excrete a mixture of bread crumbs and green dye that appeared to the onlooker indistinguishable from real excrement. The original duck disappears and it is believed that it was destroyed by a fire.

In the early 1740’s, Vaucanson started his duties for the French government and created the world’s first automated loom in 1745. Vaucanson designed further machines to automate the textile industry and more machine tools helping production processes, wherefore he became a member of the Académie des Sciences in 1746. Jacques de Vaucanson died in Paris in 1782. The inventor left a collection of his work as a bequest to Louis XVI. The collection would become the foundation of the Conservatoire des Arts et Métiers in Paris. His proposals for the automation of the weaving process, although ignored during his lifetime, were later perfected and implemented by Joseph Marie Jacquard, the creator of the Jacquard loom.