You are here: Home › geography › John Speed and his Atlas of the British Isles 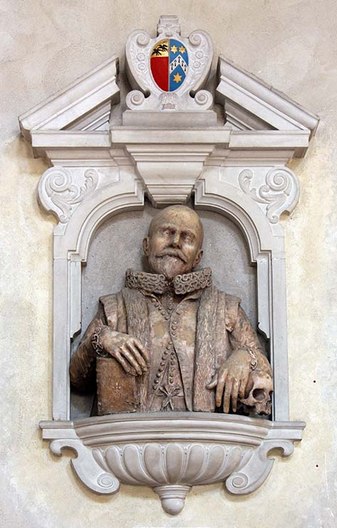 On July 28, 1629, English cartographer and historian John Speed passed away. He is considered the most famous of English map-makers. His best-known work is a landmark: the first atlas of the British Isles, the Theatre of the Empire of Great Britaine (1612), which was reprinted for well over a century after his death. Framed productions of maps from his atlas remain popular to hang in homes.

John Speed was born at Farndon, Cheshire, in 1552, the son of John Speed (1526–1584×1603), a merchant tailor, and Elizabeth Cheynye (b. 1530). He went into his father’s tailoring business. Speed is described as being “an ambitious, energetic man, no great scholar, more a compiler who drew together, both in his histories and his maps, the researches and surveys of others”. He settled in London in 1582. While earning a living as a tailor, Speed developed a strong interest in history, particularly antiquities and genealogies.[1] His first cartographical work, a four sheet wall map of Canaan in Biblical Times, was published in 1595. Shortly after, in 1598, Speed came to the attention of Sir Fulke Greville, who subsequently made him an allowance to enable him to devote his whole attention to research. As a reward for his earlier efforts, Queen Elizabeth granted Speed the use of a room in the Custom House.

The Society of Antiquaries

Speed was also introduced into Greville‘s circle of friends, and sponsored for membership of the Society of Antiquaries. There he met many of the greatest scholars of the day, including William Camden, Robert Cotton and William Smith, all of whom later contributed to Speed’s work.[1]

It was with the encouragement of William Camden that Speed began the Historie of Great Britaine, which was published in 1611. Although he probably had access to historical sources, his work as a historian is considered mediocre and secondary in importance to his map-making, of which his most important contribution is probably his town plans, many of which provide the first visual record of the British towns they depict. In 1627 George Humble published the Prospect of the Most Famous Parts of the World, printed by John Dawson. This is the world map from this atlas with John Speed‘s name in the title, but not attributed to Speed’s authorship. 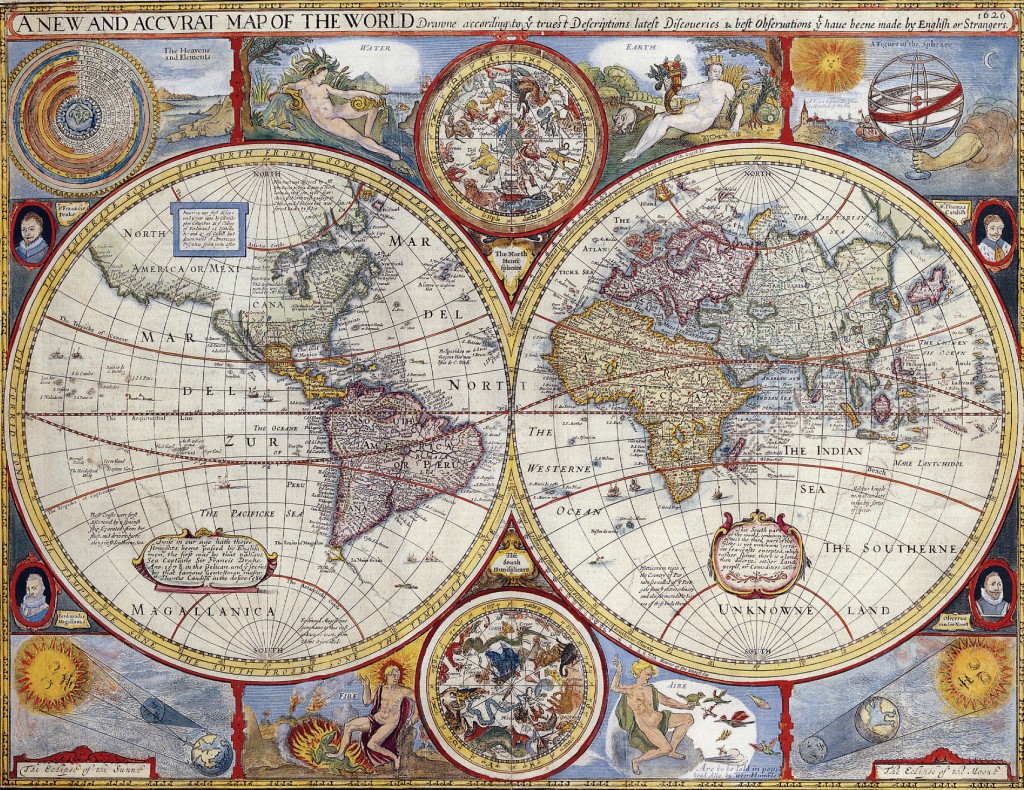 In 1627 George Humble published the Prospect of the Most Famous Parts of the World, printed by John Dawson. This is the world map from this atlas with John Speed’s name in the title, but not attributed to Speed’s authorship

But an Exceptional Cartographer

His atlas The Theatre of the Empire of Great Britaine was published in 1610/11 by John Sudbury and George Humble, and contained the first set of individual county maps of England and Wales besides maps of Ireland and a general map of Scotland. Most, but not all, of the county maps have town plans on them; those showing a Scale of Passes being the places he had mapped himself. The county maps were the first consistent attempt to show territorial divisions, such as boundaries of hundreds, but it was Speed’s town plans that were a major innovation and probably his greatest contribution to British cartography. The Theatre was an immediate success: the first print run of around 500 copies must have sold quickly because many editions followed.[2] Sudbury and Humble realized, given the increasing popularity of both county and world atlases and in the light of the success of Abraham Ortelius’s Theatrum Orbis Terrarum, the potential demand for an English world atlas.[3] 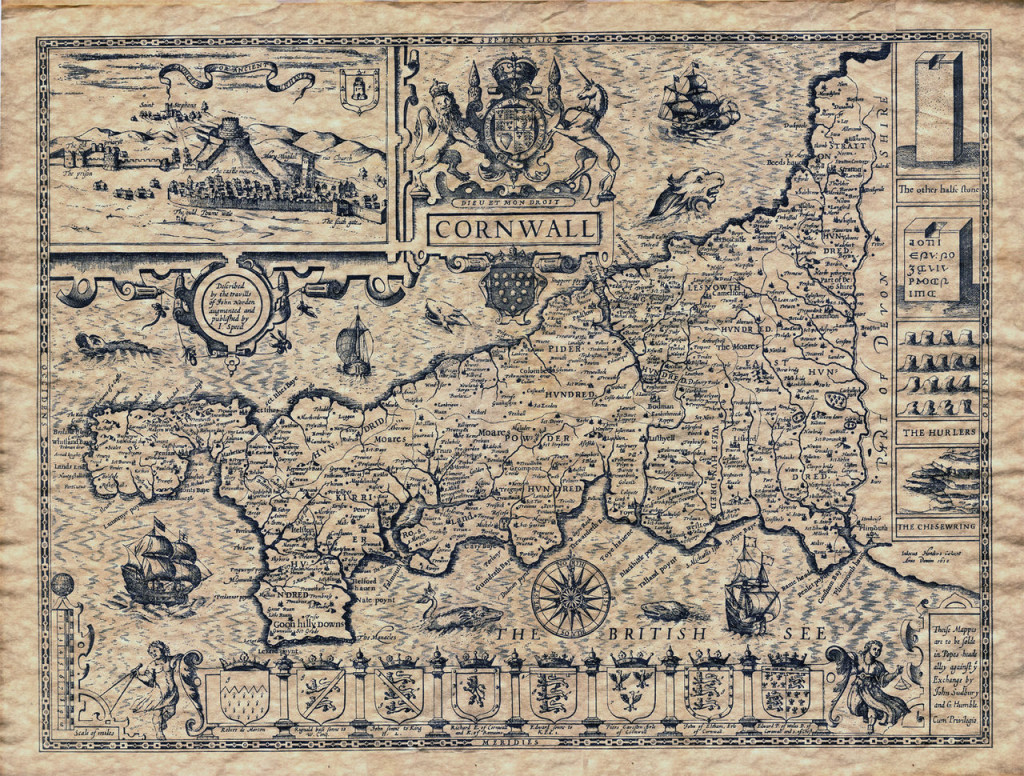 Map of Cornwall, from John Speed: The Theatre and Empire of Great Britain

In 1627 George Humble published the Prospect of the Most Famous Parts of the World, printed by John Dawson. This is the world map from this atlas with John Speed‘s name in the title, but not attributed to Speed’s authorship.

Prospect of the Most Famous Parts of the World

Consequently, in 1627, two years before his death, Speed published Prospect of the Most Famous Parts of the World with 21 finely engraved maps, which was the first world atlas produced by an Englishman. There is a fascinating text describing the areas shown on the back of the maps in English, although a rare edition of 1616 of the British maps has a Latin text – this is believed to have been produced for the Continental market. Its maps are famous for their bordering panels of national characters in local costume and panoramic views depicting the areas of major towns and cities. Much of the engraving was done in Amsterdam at the workshop of Jodocus Hondius. His maps of English counties are often found framed in homes throughout the United Kingdom. The maps of the world and America show California as an island and are amongst the earliest ever printed to depict this seventeenth-century cartographic “fact”. [2]

By his wife Susanna, who died on 28 March 1628, aged 70, Speed had issue twelve sons and six daughters. In his later years, he suffered from the stone. At age 77 or 78, in August 1629, John Speed died. He was buried alongside his wife in London’s St Giles-without-Cripplegate church. Since his maps were used in many high circles, Speed’s legacy has been long-reaching. After his death, in 1673 and 1676, some of his other maps on the British isles, the Chesapeake Bay region, specifically of Virginia and Maryland, the East Indies, the Russian Empire then ruled by Peter the Great, Jamaica, and Barbados, among other locations. With these printings and others, Speed’s maps became the basis for world maps until at least the mid-eighteenth century, with his maps reprinted many times, and served as a major contribution to British topography for years to come.

How to Identify a Genuine John Speed Map, [8]