You are here: Home › aviation › The Dream of the Largest Aircraft ever built – H-4 Hercules 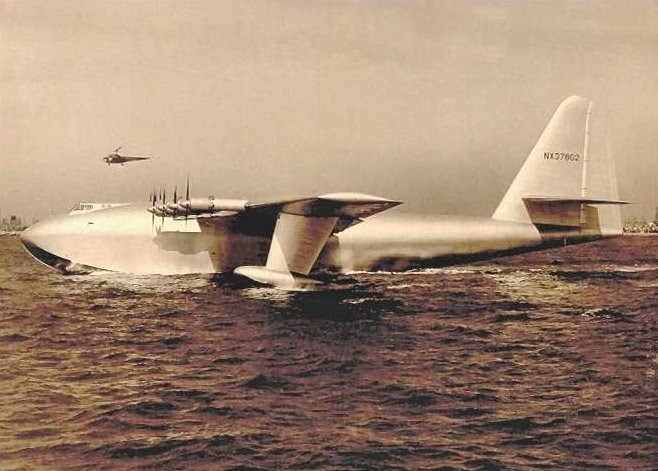 On November 2, 1947, business magnate, investor, aviator, aerospace engineer, film maker and philanthropist Howard Hughes performs the maiden (and only) flight of the Spruce Goose or H-4 Hercules; the largest fixed-wing aircraft ever built. Wait, this is not true anymore. In terms of wingspan, it was the largest aircraft ever flown until it was replaced by the Scaled Composites Stratolaunch on April 13, 2019. Since the only flight of the H-4 took place within the ground effect, its flight capability is not proven for altitudes beyond that.

Howard Robard Hughes, Jr. was an American business magnate, investor, aviator, aerospace engineer, film maker and philanthropist. But, moreover he was also one of the wealthiest people in the world. Already in the late 1920s, Hughes gained prominence as a maverick Hollywood film producer, making big-budget and often controversial films. On the other hand, Hughes also was obsessed with aviation. Actually, he was one of the most influential aviators in history: he set multiple world air speed records, built the Hughes H-1 Racer and – as we will tell you today – the H-4 “Hercules”. On the business perspective, he acquired and expanded Trans World Airlines, which later merged with American Airlines.

But, let’s get back to the story of the largest flying boat ever built. In 1942 the U.S. War Department faced the need to transport war equipment and personnel to Britain. Allied shipping in the Atlantic Ocean was suffering heavy losses to German U-boats, so a requirement was issued for an aircraft that could cross the Atlantic with a large payload. Due to wartime priorities the design was further constrained in that the aircraft could not be made of metal. The aircraft was the brainchild of Henry J. Kaiser, a leading Liberty ship builder and steelmaker, who teamed with aircraft designer Howard Hughes to create what would become the largest aircraft built at that time. The goal was to build a cargo and troop carrier that did not require critical wartime materials. Therefore, it would be built mostly of wood to conserve metal. Therefore, its critics nicknamed it the “Spruce Goose”, despite it being made almost entirely of birch rather than spruce. Hughes himself detested the nickname “Spruce Goose”.

H-4 Hercules at Evergreen Aviation & Space Museum. A Douglas DC-3 has been parked beneath its wing, to show the scale of the H-4. Photo: Drew Wallner

The huge flying boat consists of a single hull, eight radial engines, a single vertical tail, fixed wingtip floats, and full cantilever wing and tail surfaces. The entire airframe and surface structures are composed of laminated wood. All primary control surfaces, except the flaps, are fabric covered. The aircraft’s hull is divided into two areas: a flight deck for the operating crew and a large cargo hold. The Spruce Goose was to be the largest airplane ever built. In fact, after its completion, it was three times larger than the largest aircraft built before it. As Hughes kept meddling in the design, making things more complicated, Kaiser finally backed out. By 1944 the wooden flying boat had lost all priority as a government project. Hughes’s motives for stressing the project and making things so complicated are not clear. Of course, he was known for being an obsessed eccentric. For sure, he became obsessed with the idea of the H-4 to become an “aerial freighter beyond anything Jules Verne could have imagined.“

On November 2, 1947, the taxi tests of the H-4 Hercules began with Hughes at the controls. His crew included besides co-pilot Dave Grant, 2 flight engineers, 16, mechanics as well as invited guests from the press corps and industry representatives. After the first two taxi runs, four reporters left to file stories, but the remaining press stayed for the final test run of the day. After picking up speed on the channel facing Cabrillo Beach, the Hercules lifted off, remaining airborne at 21 m off the water and a speed of 217 km/h for ca. 1.6 km. Although now having proven that his ‘masterpiece’ was flight-worthy, and thus also justifying government funding the “Spruce Goose” never flew again. Its lifting capacity and ceiling were never tested. Nevertheless, Hughes paid a full-time crew of 300 workers, all sworn to secrecy, to maintain the aircraft in flying condition in a climate-controlled hangar until his death in 1976.

The Spruce Goose was decades ahead of its time in the 1940s. It revolutionized jumbo flying bodies and large lift capability, shaping modern flight. Today, the Spruce Goose is a museum piece. In 1980, the flying boat was out on display in a large dome adjacent to the Queen Mary exhibit in Long Beach, California. For almost 20 years now, the Spruce Goose has found a new home at the Evergreen Aviation Museum in McMinnville, Oregon, where it counts as one of the main attractions as the flying boat with the largest wingspan of any aircraft ever built.