You are here: Home › explorer › Horace-Bénédict de Saussure and the Mount Blanc

On August 3, 1787, Swiss physicist and Alpine traveller Horace-Bénédict de Saussure made the third ascent of the Mount Blanc and determined via scientific measurement Mont Blanc to be the highest mountain in Europe.

Horace-Benédict de Saussure – Growing Up in the Alps

Horace Bénédicte de Saussure was born on February 17, 1740 near Geneva, Switzerland. Saussure received encouragement from his father, Nicolas de Saussure, his uncle Charles Bonnet, the naturalist and poet Albrecht von Haller and the physician Théodore Tronchin. From 1757 he studied natural sciences at the Academy of Geneva, where he received his doctorate in 1759. In 1862, at the age of only 22, Saussure was appointed professor at the University of Geneva. Recognized are his merits in geology, of which he is one of the founders, in atmospheric physics and related sciences. He delivered remarkable plant-anatomical work. Glaciology also owes its foundations to him. During his years as a scientist, Saussure traveled through France, the Netherlands, England, Italy as well as Sicily and Alps. In the Alps, Saussure mostly focused on the Chamonix area. In 1760, it is believed, Saussure first began to plan his ascent to Mount Blanc and tried to find an adequate route.

In 1787, one year after Mount Blanc had been successfully ascended by two Chamonix men by way of the Grands Mulets, Horace-Bénédict de Saussure also reached the mountain top among with several servants and guides. There, he also was able to perform the first scientific experiments and observations. For instance, on the summit, Saussure made first barometric measurements and on August 3, 1787 came to the result, that Mount Blanc was the highest mountain in Europe. 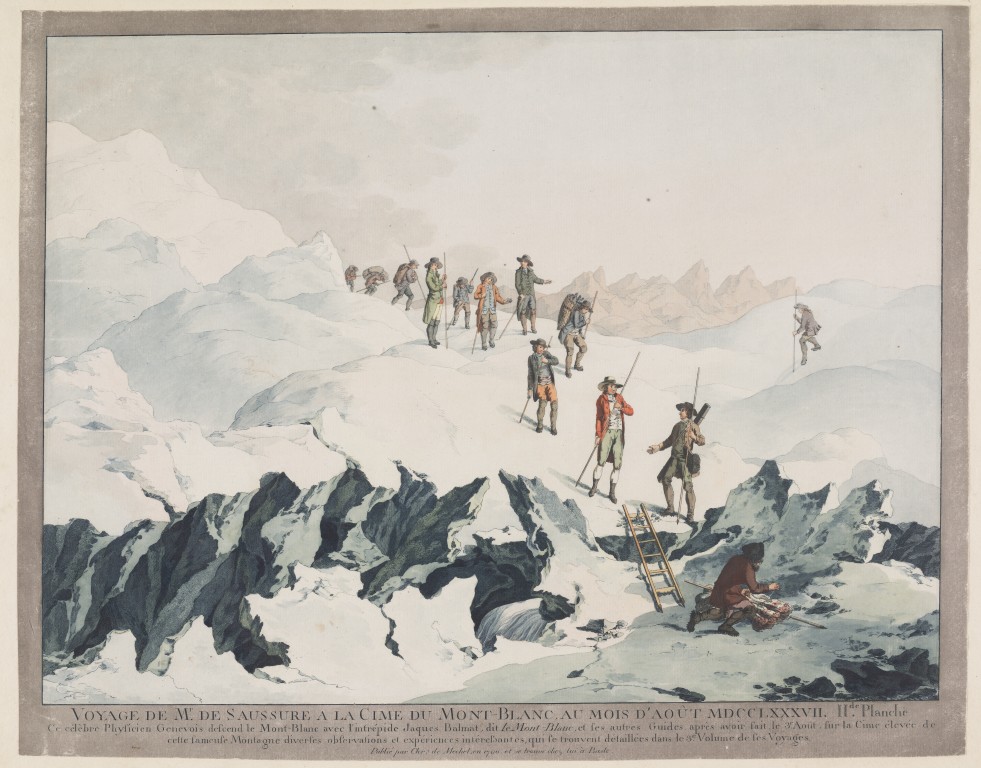 De Saussure invented an electrometer and improved the hygrometer and similar instruments. One of the strangest is the cyanometer, an instrument he developed to measure the colour intensity of the blue sky colour. Alexander von Humboldt,[5] among others, used these instruments on his American expeditions. Saussure made many important contributions to science and included the fields of meteorology, geology, glaciology, magnetism and astronomy.  As founder and president of the Society of Arts, he rendered great services to the factory system of Geneva. The philosopher Arthur Schopenhauer [6] mentions the natural scientist in his dissertation Ueber die vierfache Wurzel des Satzes vom zureichenden Grunde: “SAUSSURE is said to have seen, from Mont Blanc, the rising moon so large that he did not recognize it and fainted in horror.” In 1767, Saussure constructed the first known Western solar oven, trying several designs before determining that a well-insulated box with three layers of glass to trap outgoing thermal radiation produced the most heat. The highest temperature he reached was 230 °F (110 °C), which he found did not vary significantly when the box was carried from the top of Mt. Crammont in the Swiss Alps down to the Plains of Cournier, 4,852 feet lower in altitude and 34 °F (1 °C) warmer in temperature, thereby establishing that the external air temperature played no significant role in this solar heating effect.

However, Saussure’s most important field of research remained the study of the Alps and he was one of the first men to systematically explore the regions of ice and snow. Saussure is considered the father of modern Alpine research. Saussure’s most notable written work is probably ‘Voyages dans les Alpes‘. His descriptions of seven of his Alpine journeys, with his scientific observations gathered en route, were published by him in four quarto volumes from 1779 to 1796.  In the later years of his life he took part in the new legislation of his fatherland and was a member of the Council of Two Hundred. In 1787 he became a corresponding member and in 1791 an associé étranger of the Académie des sciences. From 1788 he was a fellow of the Royal Society. Horace-Benédict de Saussure died on January 22, 1799 in Geneva. He was the father of Nicolas Théodore de Saussure, grandfather of Henri de Saussure and great-grandfather of the linguist Ferdinand de Saussure.[7]