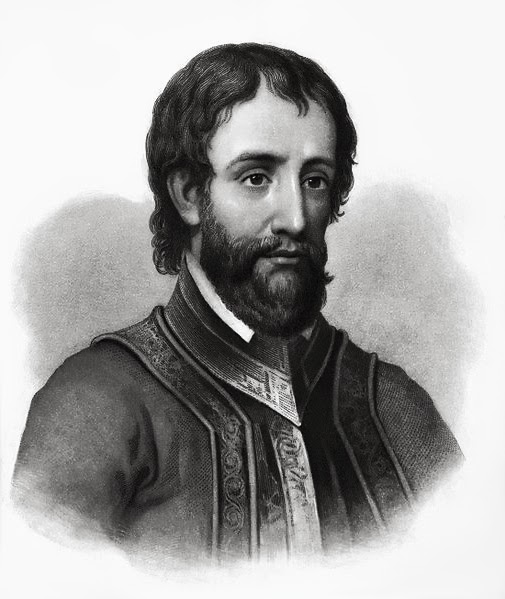 On June 3, 1539, Spanish conquistador and explorer Hernando de Soto, with all the dignitaries and necessary paraphernalia, took formal possession of La Florida, where he landed nine ships with more than 620 men and 220 horses. De Soto‘s expedition was the first European expedition leading deep into the territory of the modern-day United States, searching for gold, silver and also a passage to China. Moreover, he also was the first European documented to have crossed the Mississippi River.

Hernando de Soto left for his first expedition to the Peninsula of Yucatán in order to find a passage between the Atlantic and the Pacific Ocean. The goal was to improve trading routes with the Orient. Unfortunately, his expedition failed wherefore he joined Francisco Pizarro‘s fleet as a captain, departing for the present day Peru. De Soto’s troops fought against the Incan army and plundered their villages. During their following battles, the Spanish plundered further cities such as Cuzco, becoming very rich due to the great amounts of gold and silver found before returning to Spain in 1534.

After returning to Spain, Hernando de Soto and his activities in Peru were well known and his reputation grew. Only a few years later, the explorer had another crew with two ships together, leaving for North America. De Soto arrived at present day Brandeton, Florida along with 620 men and 220 horses. The conquistador and explorer brought mostly priests, farmers, engineers, merchants, and soldiers. The expedition made their way along Florida’s west coast up north, facing several issues with natives. After hearing about gold findings they turned towards north-east, present day Georgia continuing towards South Carolina.

Failing to Find Any Gold

Failing to find any gold, the expedition stopped for about a month in North Carolina and continued along the Tennessee River and then headed to the Gulf of Mexico. On their way, the Spanish were again encountered by natives and lost hundreds in a cruel battle, killing thousands of hostile warriors. The battle became known as one of the most cruel and the bloodiest in history of North America.

To keep the battle secret, de Soto sent his troops into Mississippi, reaching Mississippi River in 1541. Hernando de Soto did not really care for the river itself, seeing it rather as an obstacle. The expedition members built several floats to cross the river but were often hindered by hostile natives and one month later they were finally able to reach the river’s other side, continuing the expedition towards Arkansas, Oklahoma, and Texas. They continued their travel, eventually reaching Caddo River, but after another encounter with dangerous natives, the expedition returned to Mississippi River.

On May 21, 1542, Hernando de Soto died of a fever on the banks of the Mississippi in present day Louisiana. Since he had spread among the local natives that Christians were immortal, his men felt compelled to conceal his death. They hid the body in blankets weighted with sand and sank it in the river. The Spaniards, now under the command of Luis de Moscoso Alvarado,[12] traveled west again, crossing into north Texas before returning to the Mississippi. With nearly half of the original expedition dead, the Spaniards built rafts and traveled down the river to the sea, and then made their way down the Texas coast to New Spain, finally reaching Veracruz, Mexico, in late 1543.[10] Still on the return trip on the Mississippi, they were fiercely attacked by the Natchez and other tribes, who in the meantime had united against the Spaniards. Of the original 700 members of the expedition, 311 arrived in Mexico. From the Spanish point of view, the expedition depicted a failure. Still, new trade routes were established and improved, the contact to several native tribes was developed and a documentation of the North American flora and fauna was established.

De Soto’s excursion to Florida was a fatal disaster. They had acquired neither gold nor riches, had founded no colonies, and the reputation of the expedition at that time was closer to that of Don Quixote than to that of Hernán Cortés. As was the method of Spanish conquest elsewhere in the Americas, de Soto mistreated and enslaved the natives he encountered. For the most part, the Indian warriors they encountered were intimidated by the Spanish horsemen and kept their distance.[10] De Soto was instrumental in contributing to the development of a hostile relationship between many Native American tribes and Europeans. When his expedition encountered hostile natives in the new lands, more often than not it was his men who instigated the clashes.

More devastating than the battles were the chronic diseases carried by the members of the expedition. Because the indigenous people lacked the immunity which the Europeans had acquired through generations of exposure to these Eurasian diseases, the Native Americans suffered epidemics of illness after exposure to such diseases as measles, smallpox, and chicken pox. Several areas traversed by the expedition became depopulated by disease caused by contact with the Europeans. However, the records of the expedition contributed greatly to European knowledge about the geography, biology, and ethnology of the New World. De Soto’s expedition led the Spanish crown to reconsider Spain’s attitude toward the colonies north of Mexico. He claimed large parts of North America for Spain. The Spanish concentrated their missions in the state of Florida and along the Pacific coast. On the other hand, the de Soto expedition left its mark on the traveled territory itself. Some of the conquistadors’ runaway and stolen horses formed part of the foundation of the later North American mustang herds.