You are here: Home › explorer › Jacques Cartier and the Discovery of Canada 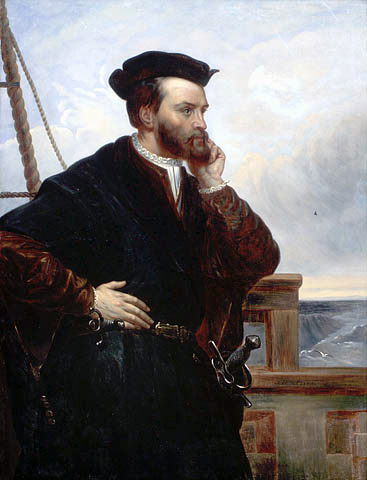 On April 20, 1534, French explorer of Breton origin Jacques Cartier set sail under a commission from the king, hoping to discover a western passage to the wealthy markets of Asia to discover Canada and Labrador. Actually, Jacques Cartier was the first European to describe and map the Gulf of Saint Lawrence and the shores of the Saint Lawrence River, which he named “The Country of Canadas”, after the Iroquois names for the two big settlements he saw at Stadacona (now Quebec City) and at Hochelaga (now Montreal Island).

Early Years of an Explorer

Jacques Cartier was born in Saint-Malo, France on December 31, 1491. There is little information about the early life of Jacques Cartier but he would have been well educated and would have studied cartography, navigation, astronomy, mathematics and seamanship in his early life. He was a respectable mariner and reportedly accompanied Giovanni da Verrazzano, an Italian captain who sailed under the French flag for King Francis I of France, on his expeditions to North America exploring the northeast coast of North America from Cape Fear, North Carolina to Maine and also a voyage to Brazil from 1524-29.

The Expedition to the Northern Lands

In 1534, King Francis I of France sent Cartier on a new trip to the eastern coast of North America, then called the “northern lands.” On a voyage that would add him to the list of famous explorers, Cartier was to search for gold and other riches, spices, and especially a passage to the riches of Asia. In the words of the commission, he was to “discover certain islands and lands where it is said that a great quantity of gold and other precious things are to be found“.

Jacques Cartier sailed on April 20, 1534, with two ships, the Grande Hermine as a ship of 60 tons and another small ship, together with 61 men, and arrived 20 days later at the western coast of Newfoundland, which he started to explore. Cartier sailed inland, going 1,000 miles up the St. Lawrence River past Anticosti Island and discovered also Prince Edward Island. He named the new country “Kanata” meaning village or settlement in the Huron-Iroquois language. After 137 days, Cartier returned to France in September 1534, sure that he had reached an Asian land. 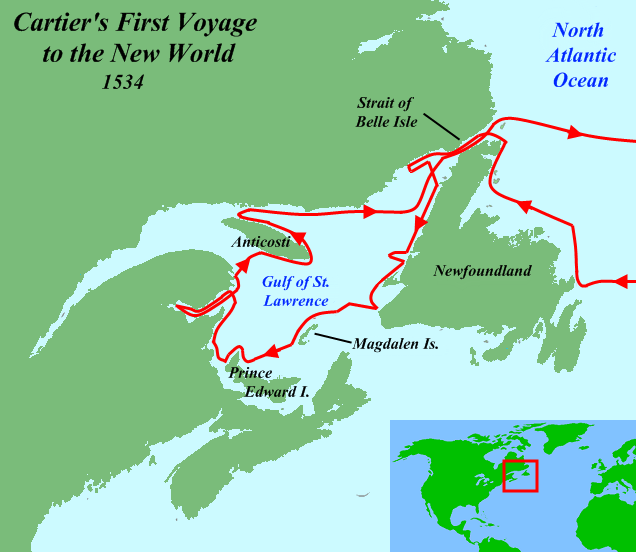 Lachine Rapids – The Way to China

Jacques Cartier set sail for a second voyage on May 19 of the following year with three ships and 110 men. He sailed up-river the St. Lorenz and reached the Iroquoian capital of Stadacona, where he left his main ships and used his smallest ship to continue on to Hochelaga (now Montreal), arriving on October 2, 1535. The expedition could proceed no further, as the river was blocked by rapids. So certain was Cartier that the river was the Northwest Passage and that the rapids were all that was preventing him from sailing to China, that the rapids and the town that eventually grew up near them came to be named after the French word for China, La Chine: the Lachine Rapids and the town of Lachine, Quebec. The upcoming winter saw an outbreak of scurvy which cost the lives of 25 of his men. When Cartier returned safely home to France in July 16, 1536, he reported back to the King and the French council started to make plans to colonize Canada. 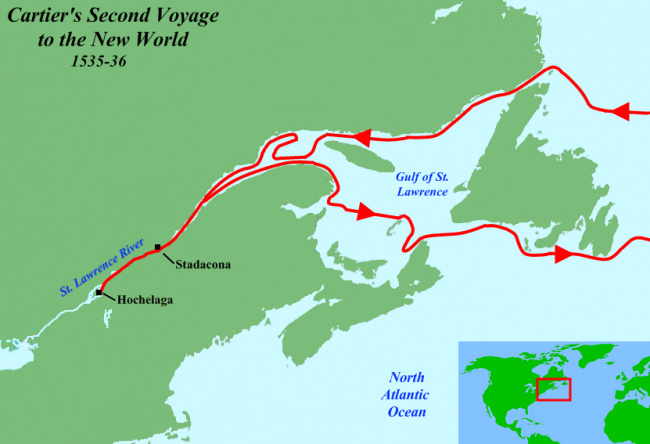 Another Voyage to Further Explore Canada

In 1540 Jean-François de La Rocque de Roberval was granted permission to establish a branch in Canada at his own expense and that of the king. Cartier was sent out with three ships for this purpose. Near the present city of Québec, near the village of Stadacona, he built the Fort Charlesbourg-Royal, examined the river and hibernated again. Cartier returned to Europe in June 1542. In 1544 he was commissioned to bring de Roberval and his people back to France. In 1545, he published an account of his expeditions and voyages of explorations. Cartier spent the rest of his life in Saint-Malo and his nearby estate, where he often was useful as an interpreter in Portuguese. He died at age 65/66 on September 1, 1557 during an epidemic, possibly typhus.

The systematic exploration and colonization of eastern Canada began in 1603 by Samuel de Champlain, the founder of New France. Cartier is the name of a street in Montreal, the Rue Cartier, and the highest mountain in the south of the province of Québec, the Mont Jacques-Cartier.

Samuel Elliot, Lecture 2 of 84 | European Colonies in the Americas, [6]