You are here: Home › biology › Salim Ali – the Birdman of India 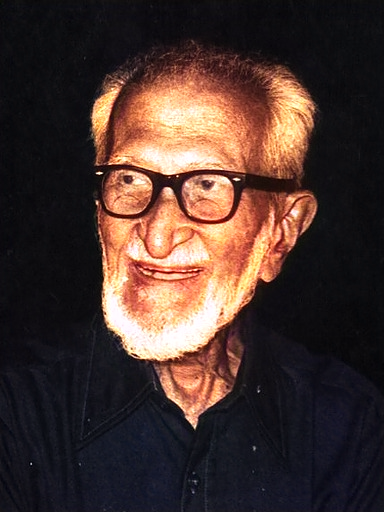 On November 12, 1896, Indian ornithologist and naturalist Sálim Ali was born. Sometimes referred to as the “birdman of India“, Salim Ali was among the first Indians to conduct systematic bird surveys across India and several bird books that he wrote helped popularize ornithology in India. Along with Sidney Dillon Ripley he wrote the ten volume Handbook of the Birds of India and Pakistan.

Salim Ali was born into a Sulaimani Bohra Muslim family of Bombay, the ninth and youngest child. Since his parents died when he was an infant, he was brought up together with his siblings by his maternal uncle, Amiruddin Tyabji in a middle-class household in Khetwadi, Mumbai. Salim was introduced to the serious study of birds by W. S. Millard, secretary of the Bombay Natural History Society (BNHS), who identified an unusually coloured sparrow that young Salim had shot for sport with his toy air gun. Millard encouraged Salim to make a collection of birds and offered to train him in skinning and preservation. Salim went to primary school at Zenana Bible and Medical Mission Girls High School at Girgaum and later to St. Xavier’s College, Bombay, where he managed to pass the matriculation exam of the Bombay University in 1913.

The Study of Zoology

Salim went to Burma to help his family in their wolfram (tungsten) mining works there, where he had ample opportunities to study birds and indulge in his favorite hobby, hunting. He returned to India in 1917 and proceeded to study commercial law and accountancy at Davar’s College of Commerce. However, Father Ethelbert Blatter at St. Xavier’s College recognized his true passion and convinced him to study zoology alongside.[2] Ali failed to get an ornithologist’s position which was open at the Zoological Survey of India due to the lack of a formal university degree, but he was hired as guide lecturer in 1926 at the newly opened natural history section in the Prince of Wales Museum in Mumbai. In 1928 he took a study leave to Germany, where he was to work under Professor Erwin Stresemann at the Berlin Zoological Museum. Part of the work involved examining the specimens collected by J. K. Stanford in Burma. In Berlin, Ali made acquaintance with many of the major German ornithologists of the time including Bernhard Rensch and Oskar Heinroth.

On his return to India in 1930, he discovered that the guide lecturer position had been eliminated due to lack of funds. Unable to find a suitable job, Salim Ali and Tehmina moved to Kihim, a coastal village near Mumbai. Here he had the opportunity to study at close hand, the breeding of the baya weaver and discovered their mating system of sequential polygamy. He then discovered an opportunity to conduct systematic bird surveys of the princely states that included Hyderabad, Cochin, Travancore, Gwalior, Indore and Bhopal with the sponsorship of the rulers of those states. Ali was not very interested in the details of bird systematics and taxonomy and was more interested in studying birds in the field.

Handbook of the Birds of India and Pakistan

From what he had collected, he published “The Book of Indian Birds in 1941” in which he discussed the kinds and habits of Indian birds. He also collaborated with S. Dillon Ripley, a world-famous ornithologist, in 1948. The collaboration resulted in the ‘Handbook of the Birds of India and Pakistan’ (10 Volume Set); a comprehensive book that describes the birds of the subcontinent, their appearance, habitat, breeding habits, migration etc. Salim also published other books. His work “The Fall of Sparrow” included many incidents from his real life.[1]

Ali was able to provide support for the development of ornithology in India by identifying important areas where funding could be obtained. He also attempted a citizen science project to study the house sparrow in 1963 through the birdwatchers of India who were connected by the Newsletter for Birdwatchers. Ali influenced the designation of the Bharatpur Bird Sanctuary and in decisions that saved the Silent Valley National Park. Although recognition came late, he received several honorary doctorates and numerous awards. Salim Ali died in 1987, at the age of 91. The USSR Academy of Medical Sciences gave him the Pavlovsky Centenary Memorial Medal in 1973 and in the same year he was made Commander of the Netherlands Order of the Golden Ark by Prince Bernhard of the Netherlands. The Indian government decorated him with a Padma Bhushan in 1958 and the Padma Vibhushan in 1976.