You are here: Home › literature › Henry James and Impressionism in Literature 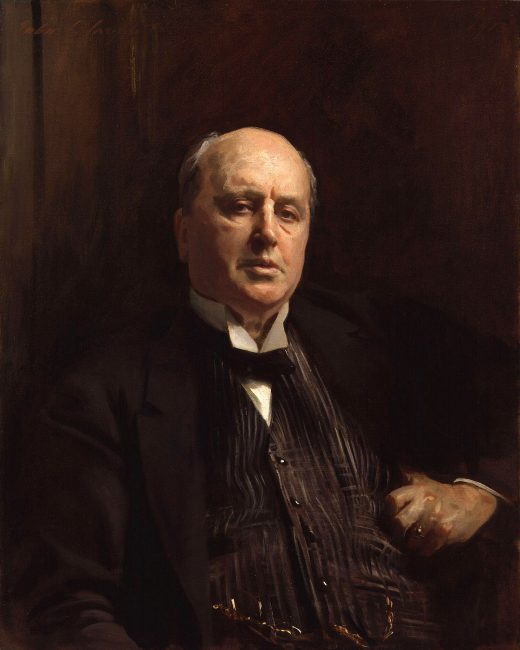 On April 15, 1843, American-British author Henry James was born. James is regarded as a key transitional figure between literary realism and literary modernism, and is considered by many to be among the greatest novelists in the English language. He is best known for a number of novels dealing with the social and marital interplay between emigre Americans, English people, and continental Europeans – examples of such novels include The Portrait of a Lady, The Ambassadors, and The Wings of the Dove.

“A novel is in its broadest sense a personal, a direct impression of life: that, to begin with, constitutes its value, which is greater or less according to the intensity of the impression.”
– Henry James: The Art of Fiction, 1885

Henry James grew up in a wealthy family. His father, Henry James Sr., was one of the most respected intellectuals whose friends and acquaintances included Henry David Thoreau, Ralph Waldo Emerson and Nathaniel Hawthorne. From an early age James was introduced to the classics of British, American, French and German literature. In his youth Henry Jr. travelled Europe and studied in New York, London, Paris, Bologna, Bonn and Geneva. At the age of nineteen, he began studying law at Harvard Law School, but soon found that literature was closer to him.

“In the long run an opinion often borrows credit from the forbearance of its patrons.”
– Henry James, “Essays in Criticism by Matthew Arnold,” North American Review (July 1865).

At the age of twenty James began to write articles for American journals. A year later he published his first short story, A Tragedy of Errors. From 1866 to 1869 and from 1871 to 1872 he worked for The Atlantic Monthly magazine and the Nation newspaper. His first story, Watch and Ward, appeared in 1871 as a serial in the Atlantic Monthly. James wrote it on his journey through Venice and Paris. The story is about a bachelor who adopts a twelve-year-old girl and wants to marry later.  In 1878 Daisy Miller established his fame on both sides of the Atlantic.

“It takes a great deal of history to produce a little literature.”
– Henry James, Hawthorne, (1879) ch. I: The Early Years.

Portrait of a Lady

In James’ multi-layered work, the antagonism between the “Old World” Europe with its long cultural tradition and the naivety of the “New World” America plays an important, perhaps even central role. Another characteristic of his work are the psychologically multi-layered and carefully drawn female figures, as for example in Portrait of a Lady, his first masterpiece, which appeared in 1881. The style of these novels is generally straightforward and, though personally characteristic, well within the norms of 19th-century fiction.  The story is of a spirited young American woman, Isabel Archer, who “affronts her destiny” and finds it overwhelming. She inherits a large amount of money and subsequently becomes the victim of Machiavellian scheming by two American expatriates

“We work in the dark — we do what we can — we give what we have. Our doubt is our passion and our passion is our task. The rest is the madness of art.”
– Henry James, The Middle Years (1893).

The Turn of the Screw

The second period of James’s career, which extends from the publication of The Portrait of a Lady through the end of the nineteenth century, features less popular novels including The Princess Casamassima, published serially in The Atlantic Monthly in 1885–1886, and The Bostonians, published serially in The Century Magazine during the same period. This period also featured James’s celebrated Gothic novella, The Turn of the Screw, which focuses on a governess who, caring for two children at a remote estate, becomes convinced that the grounds are haunted. The third period of James’s career reached its most significant achievement in three novels published just around the start of the 20th century: The Wings of the Dove (1902), The Ambassadors (1903), and The Golden Bowl (1904). As special role models he called Honoré de Balzac [1] and George Eliot; about Balzac he once said that he had learned more about writing from him than from anyone else.

“The real offence, as she ultimately perceived, was her having a mind of her own at all. Her mind was to be his — attached to his own like a small garden-plot to a deer-park.”
– Henry James, Portrait of a Lady (1881)

Emigration to the UK

After living in Paris for some time and writing various articles for the New York Tribune, he settled in England in 1875 and became a British citizen in 1915. The shock of the incipient First World War had prompted James, among other things, to protest against the USA’s policy of non-interference. In England he wrote for The Yellow Book. During his first years in Europe James mainly portrayed the lives of Americans abroad, especially in Europe. In 1905 he visited his home country for the first time in 25 years and wrote Jolly Corner, which is based on his observations in and around New York and tells the nightmarish story of a man who is haunted by his doppelganger.

“The story had held us, round the fire, sufficiently breathless, but except the obvious remark that it was gruesome, as, on Christmas Eve in an old house, a strange tale should essentially be.”
– Henry James, The Turn of the Screw (1898)

Between 1906 and 1910 he reworked various narratives and stories for the “New York Edition” of his collected works, which were published by Charles Scribner’s Son in 1911. The first two volumes of his autobiography, A Small Boy and Others and Notes of a Son and Brother, were published between 1913 and 1914. The third volume was published posthumously in 1917. Henry James died on 28 February 1916 at the age of 72 after having suffered a heart attack shortly before.

The extremely detailed description of the inner life of his characters makes James appear as a modern writer. He is regarded as a master of indirect characterization and became, among other things, a model for the stream of consciousness style; particularly well-known examples of this technique can be found in James Joyce‘ Ulysses [2] and in Manhattan Transfer by John Dos Passos.