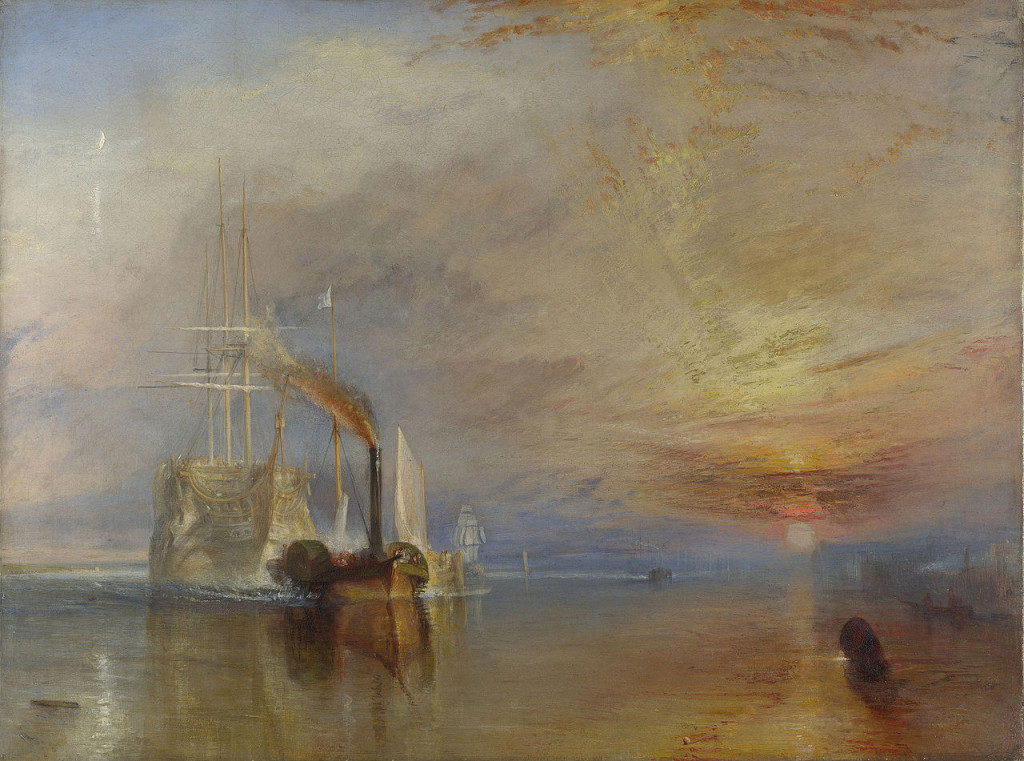 William Turner, The Fighting Temeraire tugged to her last berth to be broken up, 1839

Probably on April 23, 1775, (and baptized May 14, 1775) English Romanticist landscape painter Joseph Mallord William Turner was born. Turner was considered a controversial figure in his day, but is now regarded as the artist who elevated landscape painting to an eminence rivalling history painting. Although renowned for his oil paintings, Turner is also one of the greatest masters of British watercolour landscape painting commonly known as “the painter of light“. His work is regarded as a Romantic preface to Impressionism.

“To select, combine and concentrate that which is beautiful in nature and admirable in art is as much the business of the landscape painter in his line as in the other departments of art.”
– J. M. W.  Turner, c. 1810; as quoted in: Dennis Hugh Halloran (1970) The Classical Landscape Paintings of J.M.W. Turner. p. 75

Joseph Mallord William Turner was baptised on 14 May 1775, but his actual date of birth is unknown. Turner himself claimed he was born on 23 April, but there is no proof. He was born in Maiden Lane, Covent Garden, in London, England, to William Turner, a barber and wig maker. In 1785, due to his mother showing signs of the mental disturbance, young Turner was sent to stay with his maternal uncle, Joseph Mallord William Marshall, in Brentford, then a small town on the banks of the River Thames west of London. The earliest known artistic exercise by Turner is from this period – a series of simple colourings of engraved plates from Henry Boswell’s Picturesque View of the Antiquities of England and Wales. Turner’s drawings were being exhibited in his father’s shop window and sold for a few shillings.

Turner entered the Royal Academy schools in 1789, when he was only 14 years old, and soon began exhibiting his watercolours there. Sir Joshua Reynolds, president of the Royal Academy at the time, chaired the panel that admitted him.[2] From 1792 he spent his summers touring the country in search of subjects, filling his sketchbooks with drawings to be worked up later into finished watercolours.[1] The use of pencil sketches on location, as the foundation for later finished paintings, formed the basis of Turner’s essential working style for his whole career. His early work is topographical (concerned with the accurate depiction of places) in character and traditional in technique, imitating the best English masters of the day.[1] 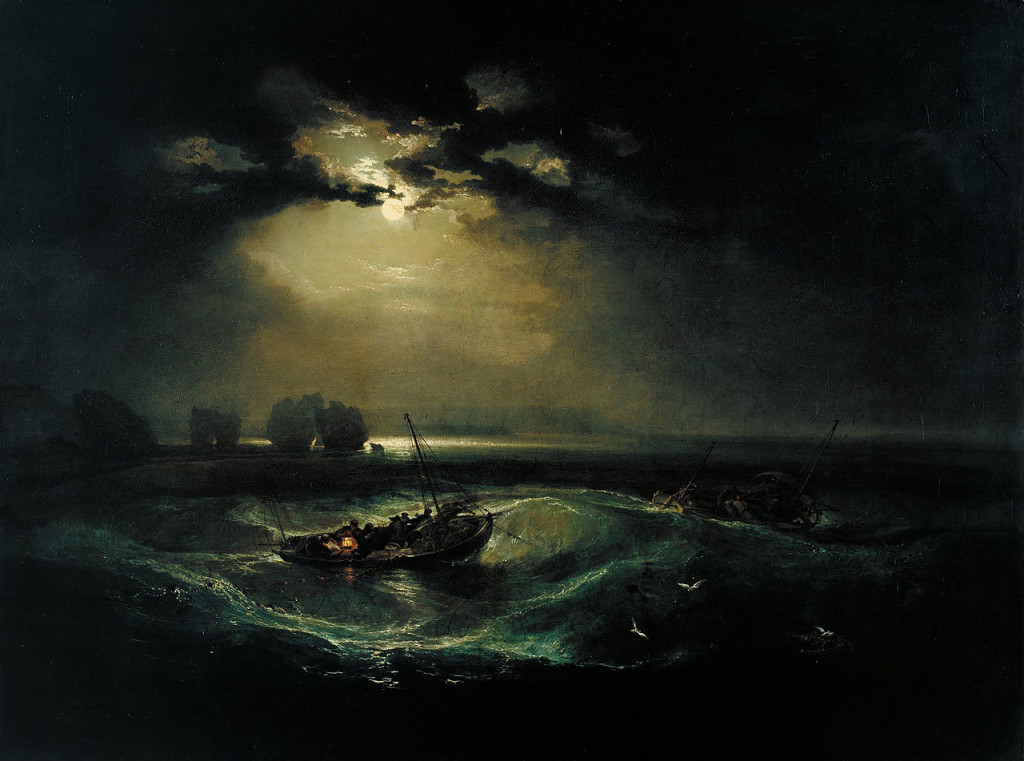 In 1796, Turner exhibited Fishermen at Sea, his first oil painting at the academy of a nocturnal moonlit scene of The Needles off the Isle of Wight. The image of boats in peril contrasts the cold light of the moon with the firelight glow of the fishermen’s lantern. The image was praised by contemporary critics and founded Turner’s reputation, as both an oil painter and a painter of maritime scenes. Turner began traveling through Europe extensively and was particularly inspired by his visits to Venice. His initial efforts reflected his training as a topographic draftsman and resulted in realistic depictions of landscapes, but over the years he developed his own style. Known as the “Painter of Light,” he created scenes of luminous imagery using brilliant colors.[3]

Associate of the Royal Academy

In 1799, at the youngest permitted age of 24, Turner was elected an associate of the Royal Academy, and in 1802 he became a full academician, a dignity he marked by a series of large pictures in which he emulated the achievements of the Old Masters, especially the 17th-century painters Nicolas Poussin, Claude Lorrain, Aelbert Cuyp, and Willem van de Velde the Younger. In 1807 he was appointed professor of perspective.[1]

As Turner grew older, he became more eccentric. He had few close friends except for his father, who lived with him for 30 years and worked as his studio assistant. His father’s death in 1829 had a profound effect on him, and thereafter he was subject to bouts of depression. He never married but had a relationship with Sarah Danby, a widow who probably bore him two children. Later he had a relationship with Sophia Caroline Booth, after her second husband died, living for about 18 years as ‘Mr Booth’ in her house in Chelsea.

The Sublime Nature of the World

About 1800 Turner took a studio at 64 Harley Street, London, and in 1804 he opened a private gallery, where he continued to show his latest work for many seasons. He was by this time overwhelmed with commissions, and the success of his career was assured.[1] Suitable vehicles for Turner’s imagination were found in shipwrecks, fires, natural catastrophes, and natural phenomena such as sunlight, storm, rain, and fog. He was fascinated by the violent power of the sea, as seen in Dawn after the Wreck (1840) and The Slave Ship (1840). Turner placed human beings in many of his paintings to indicate his affection for humanity on the one hand, but its vulnerability and vulgarity amid the ‘sublime’ nature of the world on the other. 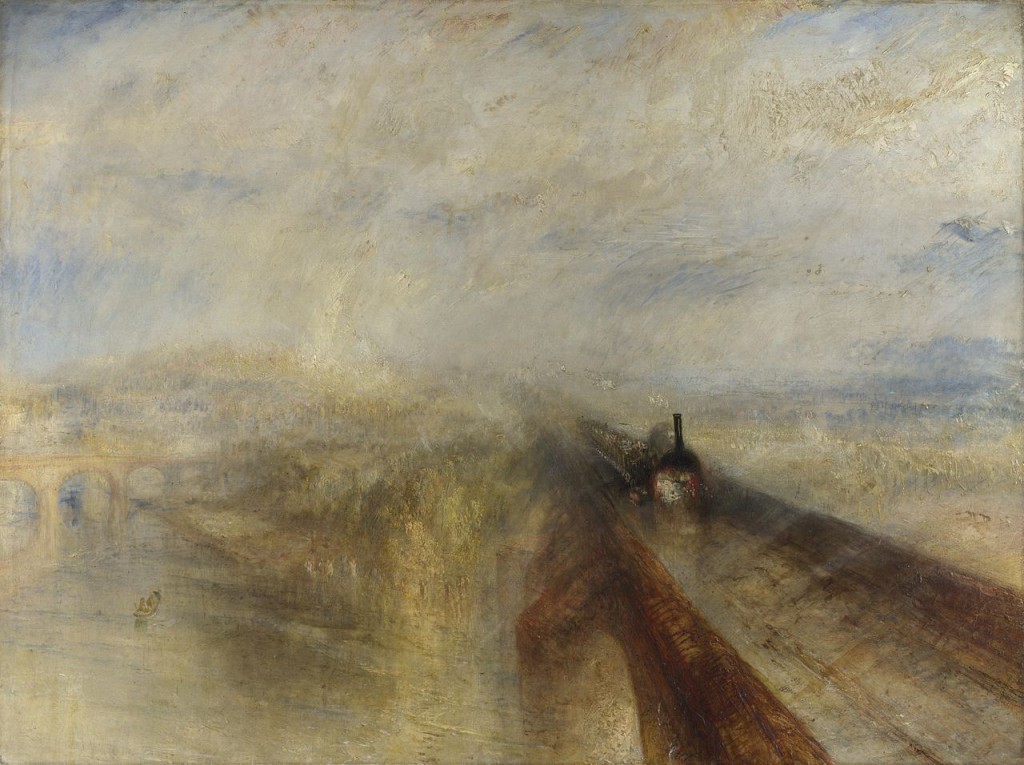 The Year without Summer and Turner’s Colours

In his later years he used oils ever more transparently, and turned to an evocation of almost pure light by use of shimmering colour. A prime example of his mature style can be seen in Rain, Steam and Speed – The Great Western Railway, where the objects are barely recognisable. The intensity of hue and interest in evanescent light not only placed Turner’s work in the vanguard of English painting, but exerted an influence on art in France; the Impressionists, particularly Claude Monet [4], carefully studied his techniques. High levels of volcanic ash (from the eruption of Mt. Tambora) in the atmosphere during 1816, the “Year Without a Summer“, led to unusually spectacular sunsets during this period, and were an inspiration for some of Turner’s work.

Turner continued to travel. In the last 15 years of his life, he visited Italy, Switzerland, Germany, and France. Turner exhibited his works for the last time in 1850. He produced thousands of pieces over the course of his career; approximately 2,000 paintings became the property of private collectors, while another 19,000 drawings and sketches and nearly 300 finished and unfinished oil paintings were left behind at two studios.[3] Turner died in Chelsea in 1851 and was buried in St. Paul’s Cathedral. By his will he intended to leave most of his fortune of £140,000 to found a charity for “decayed artists,” and he bequeathed his finished paintings to the National Gallery, on condition that a separate gallery be built to exhibit them.[1]