You are here: Home › art › Isadora Duncan Restoring the High Art of Dance 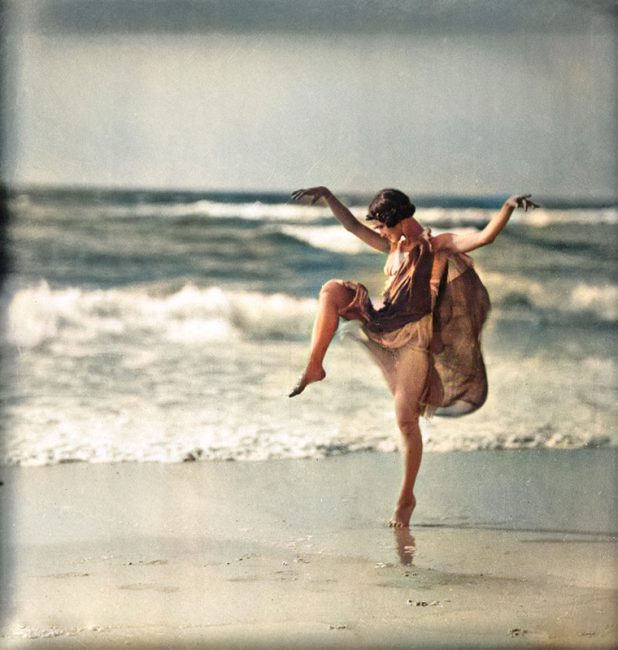 On May, 27, 1877, American dancer Angela Isadora Duncan was born, who restored the dance to a high place among the arts. Breaking with convention, she traced the art of dance back to its roots and developed within this idea, free and natural movements inspired by the classical Greek arts.

“To seek in nature the fairest forms and to find the movement which expresses the soul of these forms — this is the art of the dancer. “
– Isadora Duncan, as quoted in [7]

Angela Isadora Duncan grew up in a poor family in California and dropped out of school to support the family very early. Later on, the talented young lady became part of a theater company in New York. Her dance style was known to be improvised and full of fantasy, since she began giving lessons at the age of six and continued until her late teenage years. To be able to life her style in her dances, Duncan moved to London, where she found much inspiration in Greek arts while visiting museums. Another influence to Isadora Duncan depicted the visits in Paris, especially the exhibitions at the Louvre.

Moving away from Classical Ballet

Duncan began performing small shows in her studio in London and was finally asked by Louise Fuller, a pioneer of modern dance herself, to join her tour through Europe. On tour, Isadora Duncan was able to improve and optimize her very own dancing style concentrating on rather natural movements and moving away from the classical ballet. About her style, she once said: “I spent long days and nights in the studio seeking that dance which might be the divine expression of the human spirit through the medium of the body’s movement.” Her dancing performances polarized. The critics often found many negative aspects in her movements but in general the reactions turned out rather positive and her fame across Europe grew. To her admirers belonged Auguste Rodin and Antoine Bourdelle.[5]

Moving back to the USA

Throughout her career, Duncan lived the mission to follow her creativity and emotions in her dancing and to educate younger people. In order to achieve this, she opened dancing schools distributing her lifestyle and dancing philosophy. To bring her mission to a higher level, Isadora Duncan moved to the United States, opening another dance school, and in the 1920’s, she opened another one in Moscow.

Inspired by the Ancient Greek

As already mentioned, her dancing often reminded the audience of the ancient Greek through her poses and her tunic. Later one, she managed to merge this style with her understanding of American freedom mostly dancing bare foot. In the cultural artifacts of ancient Greece, she believed to discover decisive models for natural dance movements and natural dancer bodies. She borrowed her characteristic costumes from the clothing of antiquity: she preferred light and loose tunics, wore no corset and danced with bare legs and feet. Another significant inspiration to the dancer depicted the waves and the sound of the sea, which she also transferred into her movements. In 1913, both children died in a car accident in Paris. Her chauffeur had forgotten to apply the handbrake when he got out of the car to repair the engine in a corner. The car crashed into the Seine and the children and the nanny drowned. After the death of her children, Isadora Duncan began to drink, became full and lost her external charms.

Photographer Edward Steichen was on holiday in Venice in 1921 at the same time as the dancer Isadora Duncan who was on her way to Greece with her dance troupe. With the promise that Steichen would be able to make motion pictures of her dancing on the Acropolis, Isadora persuaded him to accompany her. While she managed to pose for a few photographs at the Parthenon, it was with her pupil and adopted daughter Thérèse that Steichen produced this startling and remarkable image.

Isadora Duncan was not only known for her extravagant dancing style. She is also remembered for always wearing flowing scarves, which unfortunately cost her young life. Duncan died on September 14, 1927, in Nice at the age of 50. As a co-driver in an open Amilcar, her silk scarf got caught on a wheel of the sports car on the Promenade des Anglais, and she was thrown onto the road by her neck, causing her neck to break. She died at the scene. Her ashes are buried in Paris on Père Lachaise. Gertrude Stein is supposed to do this with the often quoted saying: “Affectations can be dangerous.“

Since her earliest youth Isadora Duncan has been committed to feminism and a self-determined life for women. She grew up at a time when the women’s movement was making its first achievements. For example, since the end of the 19th century, women have had access to higher education and university studies. In the first decades of the 20th century, the right to vote was added in several European countries. After the First World War, women took off the corset and moved more freely than in the past. The events of the day created a framework for Isadora Duncan’s self-image. She criticized the existing marriage laws, which condemned married women to a largely lawless existence. In addition, she demanded the right to free sexuality. She herself lived out her world view to her contemporaries. She gave birth to three children by three different men and was not married to any of them.

Isadora Duncan left behind a natural and free dancing style and had a great impact on future dancing schools and movements. Even today, many followers exist, performing the art of Isadora Duncan. The classical ballet has a long tradition. Originating in the 17th century, a strictly codified movement system has developed over time. Ballet dancers must align their bodies vertically, turn their legs outwards from the hips and (apparently) overcome gravity. For female dancers, the top technique is added. Isadora Duncan has been campaigning against this form of stage dance all her life. Free, untrained dance movements and dancing people in harmony with themselves and with nature: this was Isadora Duncan’s ideal. This also included the concept of nudity, which originated in Greek antiquity as well as later concepts.