You are here: Home › medical science › Helen Taussig – the Founder of Pediatric Cardiology 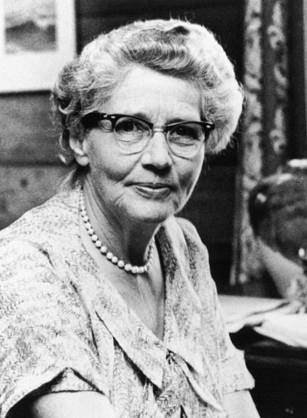 On May 24, 1898, American cardiologist Helen Brooke Taussig was born. Taussig is often referred to as the founder of the field of pediatric cardiology. Notably, she is credited with developing the concept for a procedure that would extend the lives of children born with Tetralogy of Fallot (the most common cause of blue baby syndrome). This concept was applied in practice as a procedure known as the Blalock-Taussig shunt.

Helen Brooke Taussig grew up in Massachusetts. Her father worked as an economist at Harvard University and her mother was a student at Radcliffe College. When Taussig was 11 years old, her mother succumbed to tuberculosis. Helen also contracted the disease and was ill for several years, severely affecting her ability to do schoolwork. She also struggled with severe dyslexia through her early school yearsTaussig earned her bachelor’s degree at the University of California, Berkeley in 1921. She continued her education at Harvard Medical School and Boston University studying histology, bacteriology, and anatomy. However, none of these schools allowed her to earn a degree. At Boston and while still a student, Taussig published her first scientific paper on studies of ox heart muscles with Alexander Begg. Taussig was accepted as a full-degree candidate at Johns Hopkins University School of Medicine and earned her MD degree in 1927. She remained at the school as a cardiology fellow and pediatrics intern.

In 1930, Helen Taussig was appointed chief of the pediatric department where she did extensive work on the so called blue baby syndrome. She discovered that the cause of the syndrom as a partial blockage of the pulmonary artery either alone or combined with a hole between the ventricles of the infant’s heart. Along with Alfred Blalock and Vivien Thomas, Taussig worked on developing a surgery method to correct the defect. The result of the study became known as the Blalock-Taussig-Thomas shunt. It was first performed on around 200 dogs and by 1946, they were able to perform the surgery on babies. Today, the procedure of the Blalock-Taussig-Thomas shunt is not used in its original form. Today, a length of artificial tubing, 3 to 4 millimeters in diameter, is sewn between either the subclavian or the carotid artery and the corresponding side branch of the pulmonary artery, thus obviating the need to cut off blood supply and making it easier to regulate the blood flow to the lungs. Some centers now use a shunt directly from the right ventricle to the pulmonary artery, a Sano shunt. This is done to avoid the reduced diastolic blood flow in the coronary circulation associated with the Blalock–Taussig shunt.

Helen Taussig became deaf in the later part of her career. She learned to use lip-reading techniques and hearing aids to speak with her patients, and her fingers rather than a stethoscope to feel the rhythm of their heartbeats and to lip read. It was also significantly involved in an early ban on thalidomide (Contergan®) in the USA, which caused phokomellia in embryos (fin or stump limb). In 1962 she travelled to Germany to study thalidomide cases. For her role in banning thalidomide in the USA (including testifying before the US Congress on this issue), she received the US President’s Medal of Freedom in 1964. In 1963, Helen Taussig retired from Johns Hopkins, however continuing to teach and to write scientific papers. Taussig became further known for advocating the use of animals in medical research as well as legalized abortion and the benefits of palliative care and hospice. Taussig pioneered the use of x-rays and fluoroscopy simultaneously to examine changes in a baby’s heart and lungs in a less invasive manner, which she described in 1947 in her book Congenital Malformations of the Heart.

In 1948 Taussig was awarded the Passano Award and in 1954 the Antonio Feltrinelli Prize. In 1955 she received the Albert Lasker Award for Clinical Medical Research. In 1957 she was elected to the American Academy of Arts and Sciences, in 1973 to the National Academy of Sciences. In 1965 she became the first President of the American Heart Association. In 1971 she received the John Howland Award. The American Philosophical Society awarded her the Benjamin Franklin Medal in 1986. In 1987 she received the George M. Kober Medal.

On May 20, 1986, four days short of her 88th birthday, Taussig was driving a group of friends to vote in a local election when her car collided with another vehicle at an intersection, killing her instantly.