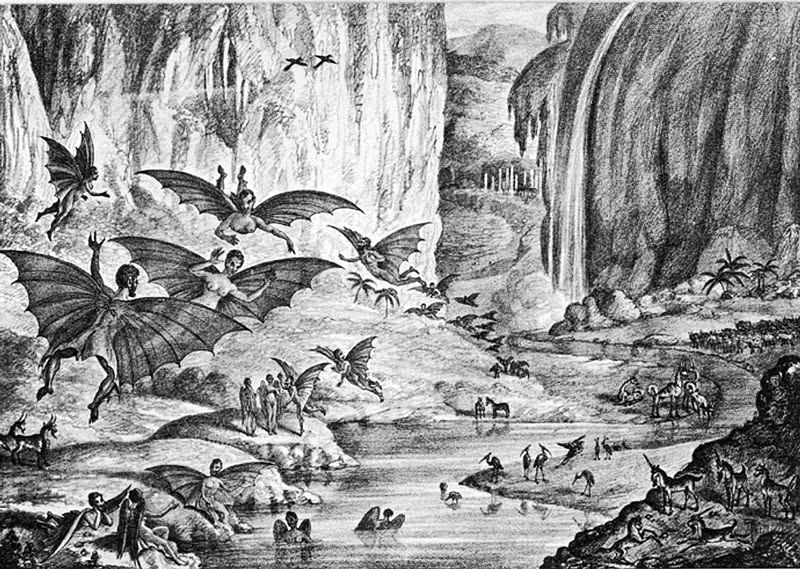 Life on the Moon as described during the Hoax

On September 16, 1835, the New York Sun concedes that her serial article about the sensational discoveries of astronomer Sir John Herschel about the Moon was only a hoax to increase their circulation. In the history of newspaper this scandal is referred to as ‘The Great Moon Hoax of 1835‘.

“GREAT ASTRONOMICAL DISCOVERIES
LATELY MADE
BY SIR JOHN HERSCHEL, L.L.D. F.R.S. &c.
At the Cape of Good Hope”
[From Supplement to the Edinburgh Journal of Science]

The six articles, starting on August 25, 1835 consisted of stories about fantastic creatures living on the moon. They were compared with goats, unicorns and bisons with wings and also human like body parts. The articles described an imaginative world full of trees and beaches. To justify the sudden results, the New York Sun wrote about a new method to built and use telescopes, which was used in this example. It was said that famous astronomer John Herschel [5] built this telescope in order to research “even the entomology of the moon, in case she contained insects upon her surface.” [1] According to the text, this telescope measured over 7 metres in diameter and contained a powerful second lense, being the “hydro-oxygen microscope” which magnified, illuminated and projected the image on another screen.

In the second article, the authors really went into detail, describing the flowers and animal herds found on the moon. On the next day, the newspaper published more information on geological formations and the biped beaver, the first “sign” of intelligent life on the moon. It was even said, that these animals were able to make fire and built small houses. On the following day, the readers were taken to a world with human like creatures, which were “covered, except on the face, with short and glossy copper-colored hair, and had wings composed of a thin membrane, without hair, lying snugly upon their backs.” During the following two days, the New York Sun described the discovery of an abandoned temple made of sapphire and a higher order of human-like life. 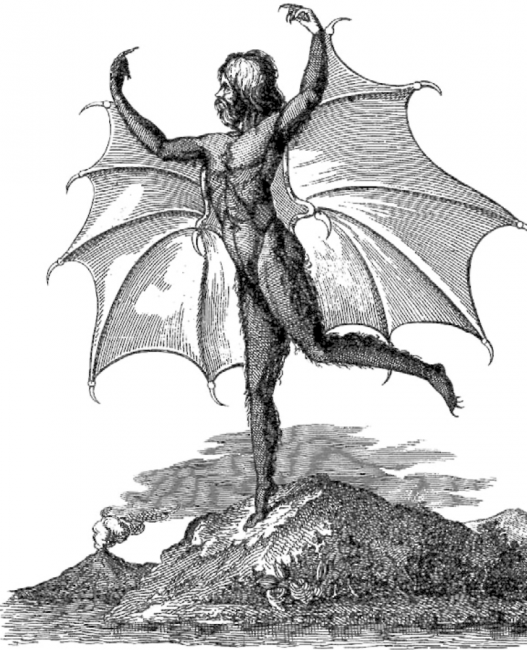 Portrait of a man-bat (“Vespertilio-homo”), from an edition of the Moon series published in Naples

The article series generated a huge excitement throughout the population, even though there were large debates whether the stories were true or not. Many newspapers in New York and beyond then started reprinting the news and soon even Europe caught up on it. During this period, The Sun made a great profit from the series and caused the first so called mass media event. The wide distribution of the paper was possible with the newly available steam-powered printing press and the first large recruitment of newsboys, shouting the headlines through the streets and selling copies.

John Herschel, whose research work was somewhat altered, was amused about the hoax, but got annoyed later on when people still believed it to be real. Edgar Allan Poe claimed the story was a plagiarism of his earlier work “The Unparalleled Adventure of One Hans Pfaall.” His editor at the time was Richard Adams Locke. He later published “The Balloon-Hoax” in the same newspaper. The hoax itself emphasized the general concern about mass media being able to distribute anything and making it believable. After the hoax was revealed, many were going to find out the amount of people, who actually believed in the findings. William Griggs published an analysis of the hoax in 1852 and noticed that the public encountered the series with “voracious credulity”. In the media, the case popularized and part of the skeptics were for instance the New York Herald or the New York Evening Post, while the New York Times and the New Yorker belonged to the believer side. Fascinating however is the fact that The Sun was not widely criticized for the hoax, but often admired for being able to draw a great story line like this.