You are here: Home › astronomy › Govaert Wendelen – the Ptolemy of Renaissance 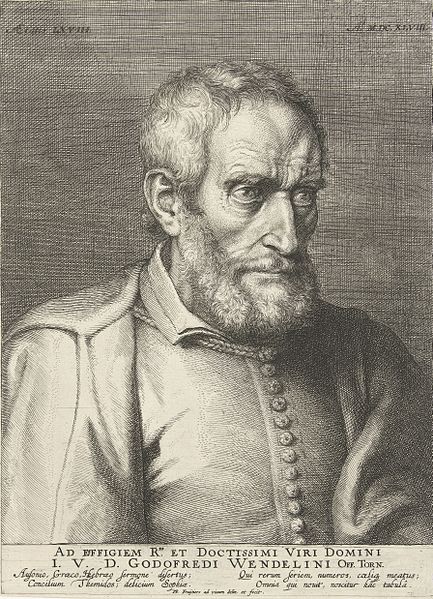 On June 6, 1580, Flemish astronomer Govaert Wendelin (Godefroy Wendelen), Latinized Godefridus Wendelinus was born. Wendelen also was known as the Ptolemy of his time. Despite going against the tenets of his Church, he was an audacious proponent of the Copernican theory that the planets orbit around the Sun. He made more accurate measurements of the distance to the sun as previously made by Aristachus (2,000 years earlier).

Godefroy Wendelin was born in Herk-de-Stad in the Prince-Bishopric of Liège, now Belgian Limburg. It is believed that as a schoolboy, Wendelin observed a lunar eclipse, probably on 30 December 1591. Later, Wendelin attended the University of Leuven, where he studied the liberal arts under Justus Lipsius. He probably intended to study and work with Tycho Brahe and made his way to Prague. However, he was stopped by illness and instead spent several years in Provence.

A Critical Overview of Ancient and Medieval Astronomy

Around 1600, Godefroy Wendelin travelled to Rome for the Holy Year, and then became a mathematics teacher in Digne. A few years later, he became a private tutor in the household of André d’Arnauld in Forcalquier. At the University of Orange, Wendelin earned his doctorate in 1612 and returned home, taking a position as head of the local Latin school. The scientist was also highly religious and started to study priesthood, being ordained in Mechelen by Mathias Hovius in 1620. At Geetbets, he was appointed parish priest and stayed there for more than a decade. In that period, Wendelin published Loxias seu de obliquitate solis, a critical overview of ancient and medieval astronomy.

The Distance Between the Earth and the Sun

Godefroy Wendelin measured the distance between the Earth and the Sun using the method of Aristarchus of Samos. He calculated around 243 times the distance to the Moon, the true value is about 384 times. However, Aristarchus calculated about 20 times. From observations of the Jupiter moons, he confirmed Kepler’s third law for their planetary motion in 1648. This was made known by the Italian astronomer Giovanni Battista Riccioli in 1651,[4] using observation data from 1610 by Nicolas-Claude Fabri de Peiresc after Pierre Costabel,[5] and independently in 1622 Johannes Kepler found that his third law was applicable to the Jupiter moons. Verifiability, however, was limited due to uncertainties regarding the large semi-axes of the orbits. Wendelin determined the width of Marseille and made length measurements following Peiresc.

From 1633 to 1650, Wendelinus was parish priest of his home town, Herk-de-Stad. In 1633 he was also assigned a prebend in the collegiate church of Condé, to provide an income that would support his scientific work. This led to contacts with Douai University and to researches in early Christian chronology. One of his main works, Eclipses lunares ab anno 1573 ad 1643 observatae (Lunar eclipses observed from the year 1573 to 1643), was published during this period. In 1648 he was appointed official of the ecclesiastical tribunal of the diocese of Tournai, taking up office in 1649.

A Defence of the Heliocentric Astronomy

In 1648 he was appointed official of the eccelesiastical tribunal of the diocese of Tournai, taking up office in 1649. In 1652 his Teratologia Cometica, containing a defence of heliocentric astronomy, was printed in Tournai, dedicated to Jean-Jacques Chifflet. During his lifetime Wendelin was recognized internationally as an astronomer, corresponding with Mersenne, Gassendi and Constantijn Huygens.