You are here: Home › astronomy › Giovanni Riccioli – a man of Encyclopedic Knowledge 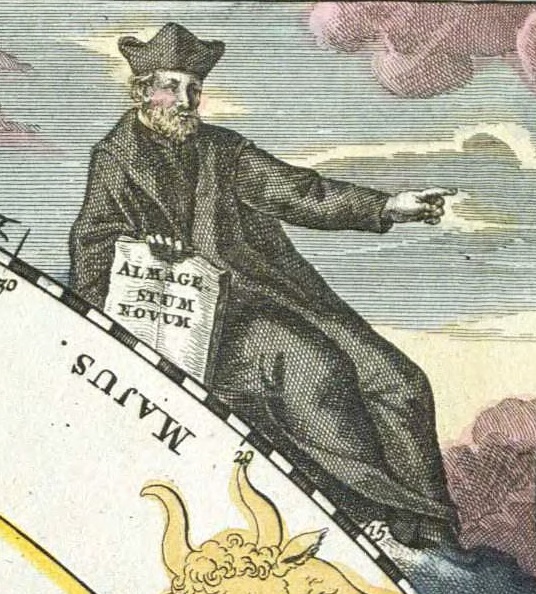 On April 17, 1598, Italian astronomer and a Catholic priest in the Jesuit order Giovanni Battista Riccioli was born. He is known, among other things, for his experiments with pendulums and with falling bodies, for his discussion of 126 arguments concerning the motion of the Earth, and for introducing the current scheme of lunar nomenclature. He also was the first to observe a double star (two stars so close together that they appear to be one) – Mizar in Ursa Major, the middle star in the handle of the Big Dipper.

“I could never extinguish the enthusiasm for astronomy once it arose in me.”
– Giovanni Battista Riccioli, [16]

Giovanni Riccioli was born in Ferrara, Italy. At age 16, he entered the Society of Jesus and after completing his novitiate, he began study of the humanities in 1616 in Ferrara and later at Piacenza. From 1620 to 1628 he studied philosophy and theology at the College of Parma. The Jesuits ran three educational establishments in Parma, the university, a college for educating the sons of the nobility, and a Jesuit College, established around 1600, which Riccioli attended. In addition to advanced courses in philosophy and theology, the College provided lower level courses in grammar and rhetoric. [1] Parma Jesuits had developed a strong program of experimentation, such as with falling bodies. There, Riccioli was strongly impressed by one of his teachers, the most famous Italian Jesuits of the time, Giuseppe Biancani, who accepted new astronomical ideas and made observations of the sun and moon with a telescope.

Riccioli became fascinated with astronomy and devoted his research activities to this topic although he also engaged in work on related topics. By 1628 Riccioli’s studies were complete. He was ordained. He requested missionary work, but that request was turned down. Instead he was assigned to teach at Parma. There he taught logic, physics, and metaphysics from 1629 to 1632, and engaged in some experiments with falling bodies and pendulums. After spending an academic year in Mantua, he was sent in 1636 he to Bologna to serve as Professor of theology for the rest of his career. 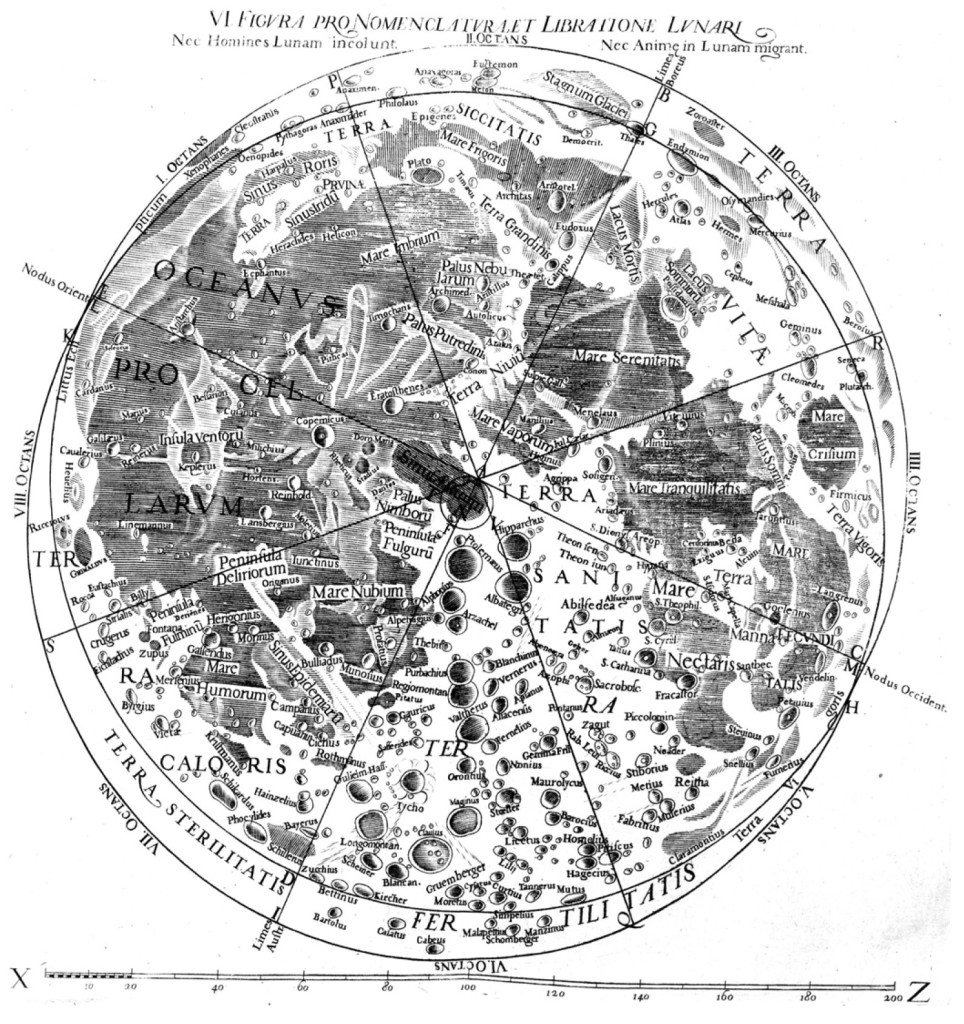 One of Riccioli’s most significant publications was his 1651 Almagestum novum, astronomiam veterem novamque complectens (New Almagest), an encyclopedic work consisting of over 1500 folio pages densely packed with text, tables, and illustrations. It became a standard technical reference book for astronomers all over Europe and was highly praised and referenced by the most famous astronomers of his time, such as, e.g. John Flamsteed,[11] the first English astronomer royal, and Jérôme Lalande of the Paris Observatory.[10] In common with many scholars of the time, Riccioli rejected the Copernican theory, and in this work gives an elaborate refutation in justification of the Roman Decrees of 1616 and 1633. He praises, however, the genius of Copernicus and readily admits the value of his system as a simple hypothesis. [3]

Measuring the Acceleration due to Gravity

Riccioli is credited with being the first person to precisely measure the acceleration due to gravity of falling bodies. In his New Almagest Riccioli included a significant discussion of and extensive experimental reports on the motions of falling bodies and pendulums. Riccioli’s philosophy was to trust the evidence of the senses:

By themselves, the senses, if correctly applied, almost always represent the object as it is in reality.[4]

This belief, of course, was just what he needed to argue in favour of a stationary earth – it does not appear to be moving. However, he still conducted experiments in an attempt to see if he could detect any evidence for motion. Riccioli also argued that the rotation of the Earth should reveal itself in the flight of artillery projectiles, because on a rotating Earth the ground moves at different speeds at different latitudes. Therefore, were a cannon, aimed directly at a target to the north, to fire a ball, that ball would strike slightly to the east of the target, thanks to the Earth’s rotation. But, if the cannon were fired to the east there would be no deflection, as both cannon and target would move the same distance in the same direction. Riccioli said that if this deflection effect existed in northward shots they would have detected it. Thus, the absence of this effect indicated for Riccioli that the Earth does not rotate. He was correct in his reasoning in that the effect he describes – the Coriolis effect – actually does occur. However, the rightward deflection actually occurs regardless of the direction the cannon is pointed, and so cannoneers would not notice any differences based on direction. 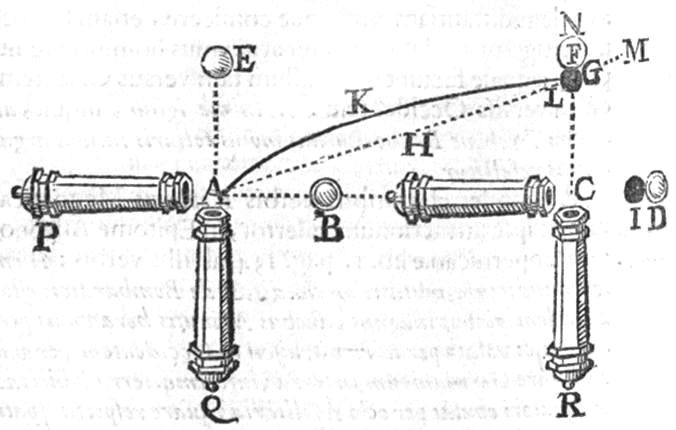 Illustration from Riccioli’s 1651 New Almagest showing the effect a rotating Earth should have on projectiles.

A Stationary vs Moving Earth

In Almagestum novum Riccioli presented 126 arguments, 49 in favour of the earth moving round the sun, and 77 in favour of a stationary earth. For some he quoted his own experiments, and for some he quoted experiments of others. Riccioli also was very impressed by Johannes Kepler’s finding that the planets of the solar system moved in elliptical orbits round the sun.[8] However, since this was at odds with his own stationary earth system, he adopted a rather neat way of explaining Kepler’s results. God, he claimed, had made the planets move in a regular way to accommodate human understanding. He had therefore made them appear to have elliptical orbits round the sun, to make calculating their positions a nice task for humans, while physically they moved in a complicated way round a stationary earth.

Riccioli collaborated with other Jesuits, most notably Francesco Maria Grimaldi at Bologna, with whom he extensively studied the moon, of which Grimaldi drew maps. On one of these maps, Riccioli provided names for lunar features, which are the basis for the nomenclature of lunar features still in use today. Riccioli named large lunar areas for weather. He named craters for significant astronomers, grouping them by philosophies and time periods. Although Riccioli rejected the Copernican theory, he named a prominent lunar crater Copernicus and other important craters Kepler and Galileo. 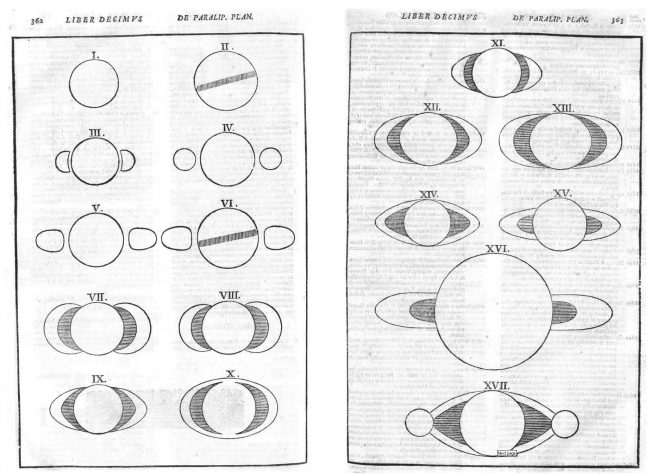 In 1665, Giovanni Battista Riccioli  published Astronomia Reformata (Reformed Astronomy), where he reported on the changing appearance of Saturn, including an apparent record of a very early observation of Jupiter’s Great Red Spot and of Jovian cloud belts appearing and disappearing over time. Riccioli built an astronomical observatory in Bologna at the College of St. Lucia, equipped with many instruments for astronomical observations, including telescopes, quadrants, sextants, and other traditional instruments. Riccioli dealt not only with astronomy in his research, but also with physics, arithmetic, geometry, optics, gnomonics, geography, and chronology. His extensive corresponcance included many leading scientists of his age, such as the Polish astronomer Johannes Hevelius, Christiaan Huygens, Giovanni Domenico Cassini, and Athanasius Kircher.[9] Riccioli continued to publish on both astronomy and theology up to his death in Bologna in 1671.

Andrew Harrisson, How do we know the Earth goes around the Sun?: Laws of Physics lecture, [15]