You are here: Home › chemistry › Jean-Antoine Chaptal and the Industrial Chemistry 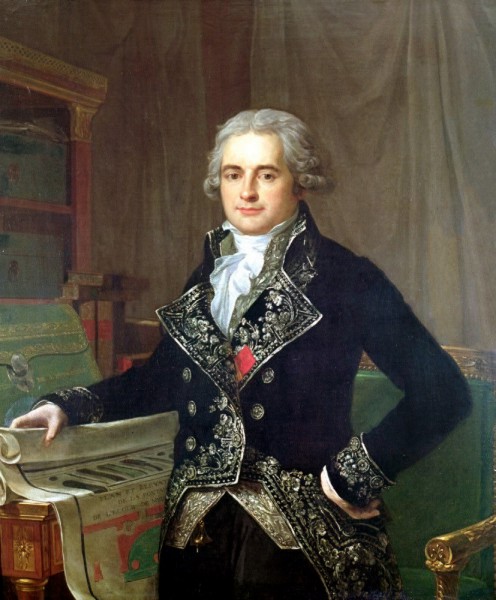 On June 5, 1756, French chemist, physician, agronomist, industrialist, statesman, educator and philanthropist Jean-Antoine Chaptal, comte de Chanteloup was born. Chaptal authored the first book on industrial chemistry and also coined the name nitrogen. He was the first to produce sulphuric acid commercially in France at his factory at Montpellier and helped to organize the introduction of the metric system.

Jean-Antoine Chaptal was born in Nojaret (Lozère) in southwestern France, the youngest son of well-to-do small landowners, Antoine Chaptal and Françoise Brunel. With the support of his uncle Claude Chaptal, who was a prominent physician at Montpellier, Jean-Antoine Chaptal studied medicine at the medical school at the University of Montpellier from 1774 to 1777 and continued his postgraduate study in medicine and chemistry at Paris. There he attended courses on chemistry at the École de Médicine given by J.B. Bucquet, who was a friend of Lavoisier and instructor earlier of Berthollet. Chaptal became professor in Montpellier. His first book Mémoires de chimie was published in 1782.[4,5]

At Montpellier, Chaptal established one of the first modern chemical factories in France. The company manufactured sulfuric, nitric, hydrochloric and other acids, alum, white lead and soda, among other substances and was quite successful. In the meantime, his scientific work was published by the Académie Royale des Sciences and in the Annales de chimie, the new journal founded in 1789.

It is believed that Jean-Antoine Chaptal was indeed a liberal, but probably apolitical as well. He believed in orderly change, human progress, competence and hierarchy. Initially, he welcomed the French Revolution. But in 1793 he determined to lead opposition in Montpellier against the extremism of the Committee of Public Safety of the National Convention in Paris. Chaptal was arrested but released due to his company’s value to the nation. In the Spring of 1794, by order of Lazare Carnot, the Minister of War, Chaptal was charged with the management of the major gunpowder factory at Grenelle in Paris. After Thermidor, Chaptal spent about four years mainly in Montpellier teaching at the medical school and rebuilding his chemicals industry. Jean-Antoine Chaptal was elected to the Institut and became a member of the editorial board of the Annales de chimie. Further he built a second large chemicals industry near Paris at Ternes.

Chaptal developed his theorems on winemaking from 1799 onwards. He wrote the wine section of François Rozier’s agricultural dictionary. Scientists like Cadet-de-Vaux and Jean-Louis Roard published his new doctrine with their specific observations. The wine industry immediately implemented his research results. Chaptal revolutionised oenology and summarised his principles in a book in 1807.

A Politician under Napoleon

In later years, Chaptal became Napoleon’s Council of State, then acting Minister of Interior, and finally confirmed in the position. He would remain in this high office until his resignation on 6 August 1804, when Napoleon was going to coronate himself emperor of France. It is belied that everything Jean-Antoine Chaptal touched was improved. From early on, he worked to design and implement not only a fundamentally new administrative structure of prefects, subprefects, mayors and municipal councils for France, but also a new primary and secondary educational system introducing the lycée. He introduced the metric system for weights and measures of length and promoted the arts and sciences. Napoleon awarded him the title of Comte de Chanteloup and the Grand Cross of the Legion of Honour.

Resignation and Back to Scientific Work

After his resignation in 1804, Chaptal wrote Napoleon with whom he had developed a friendship, that he wanted to get back to his scientific endeavors. Some of his major works were written in the years immediately following the resignation. He still had his chemical factories and his son was about to establish a third chemicals plant at Martigues in southern France. In his later years Jean-Antoine Chaptal resumed his favorite position as president of the Society for the Encouragement of National Industry and organizer of industrial expositions. Chaptal was called back during the Hundred Days (March–June, 1815) to serve as Napoleon’s Minister of Agriculture, Commerce and Industry. But that was a brief affair, ended by the Emperor’s defeat at Waterloo and final exile to St. Helena. As the Bourbon king Louis XVIII assumed the throne in France beginning the Restoration (1815–1830), Chaptal wisely retreated temporarily to his estate at Chanteloup. He resisted an invitation by the American consul in Paris to take up residence in the United States. Instead, he stayed above politics, and gradually, with the intelligence and good grace he had always exercised in high circles, emerged in the role of elder statesman, philanthropist, esteemed scientist and authority on French agriculture, commerce and industry.

Unfortunately, the 1820s for Chaptal were clouded by the financial ruin of his son, Jean-Baptiste Chaptal and Chaptal himself was left with a small pension. His remarkable career had unfolded through five different regimes and he had contributed importantly to every one. Ruined by the debts of his sons, who worked in the chemical industry, he sold his property in 1823 and died in poverty on 30 July 1832. His name is one of the 72 names of famous French scientists engraved on the Eiffel Tower in Paris.

√ What is the Saponification Process of Making Soap? Watch this video, [8]