You are here: Home › biology › Elizabeth Gertrude Britton Knight and the Study of Mosses 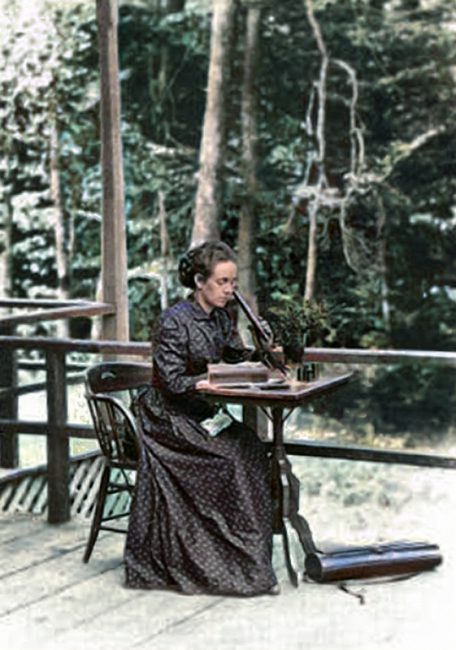 On January 9, 1858, American botanist, bryologist, and educator Elizabeth Gertrude Britton (née Elizabeth Gertrude Knight) was born. She and her husband, Nathaniel Lord Britton played a significant role in the fundraising and creation of the New York Botanical Garden. She is best known for her lasting contributions to bryology, the study of mosses.

Elizabeth Gertrude Knight was born in New York City, one of five daughters, to James and Sophie Anne Knight. Her family operated a furniture factory and sugar plantation in the vicinity of Matanzas, Cuba. She spent much of her childhood on the island. There, she became interested in plants and picked up a degree of Spanish that would later be of use during expeditions. In later childhood, Elizabeth attended a private school in New York and at age of seventeen, she graduated from Normal College, an institution primarily for women that trained primary and secondary school teachers. Elizabeth immediately was given a position there as a teacher. At age 27, she married Nathaniel Lord Britton, an Assistant in Geology at Columbia College and later the first director of the New York Botanical Garden, who shared her growing interest in botany.

E.G. Britton had been a member of the Torrey Botanical Club since 1879, when she shared with other members her recent discovery of a rare curly grass fern, Schizaea pusilla, made on a field trip to Nova Scotia. This was an important botanical discovery, since it confirmed a finding of the same grass made 60 years earlier. In 1883, she was named a Tutor in Natural Science. Also in that year, her first paper concerning mosses appeared. She served as the club’s curator of mosses from 1884 to 1885 and the editor of its memoirs. It was also through the Botanical Club that she met her later husband Nathaniel Britton. [2] One of the leading botanists of the day, she was the only female charter member of the Botanical Society of America, founded in 1893.

The Study of Mosses

From 1880 through 1920, Elizabeth Britton devoted a considerable art of her research to the collection and the study of mosses. After her marriage in 1885, Elizabeth Britton resigned her teaching position at Normal College to focus on her research. In 1889, she published the first of an eleven-part series of papers titled “Contributions to American Bryology“. Her catalogue of the mosses of West Virginia appeared in 1892, and the first of eight articles titled “How to Study the Mosses” for a popular magazine was published in 1894. Thus, she became the leading expert in bryology in the U.S. Elizabeth Britton, along with her husband and other members of the Torrey Botanical Club also initiated the establishment of the New York Botanical Garden.

When the couple had traveled traveled to England in 1888, they were very impressed by the Royal Botanic Gardens, Kew, especially by the quality and quantity of Kew’s herbarium, library, and gardens. Upon their return, rich and prominent U.S. citizens were recruited as incorporators they succeeded to establish the Botanical Garden by act of the state legislature in 1891. Elizabeth was a prime mover in the efforts to raise funds for the organization in the 1890s, while Nathaniel became the first Director-in-Chief of the Botanical Garden in 1896. The Columbia College herbarium was transferred there in 1899, and Elizabeth Britton became unofficial curator of mosses. In 1912 she received appointment as honorary curator of mosses.

She also took on unofficial curatorship of the moss herbarium at Columbia College, where her husband taught geology, helping it to acquire the highly significant moss collection of Swiss bryologist August Jaeger.[1] Elizabeth Britton continued to study plants other than mosses. She published “A Revision of the North American Species of Ophioglossum,” the adder’s-tongue ferns, in 1897. With Delia West Marble, she collected the type specimen of Dryopteris brittonae, a species of maiden fern, in 1906. In the first decade of the century, Britton began to devote energy to the conservation of wildflowers. Britton was a founder and in 1902–16 and 1918–27 secretary and treasurer of the Wild Flower Preservation Society of America. Through the society and various publications she led movements that succeeded in saving numerous endangered wildflower species around the country.

She published more than 340 signed scientific papers during her career. 15 species and one moss genus (Bryobrittonia) named for Elizabeth Britton. Despite her outstanding research activity on mosses, the definitive books in the field were written by her graduate student A. Joel Grout. Mount Britton, a double peak in El Yunque National Forest in Puerto Rico, honors Elizabeth and her husband Nathaniel.