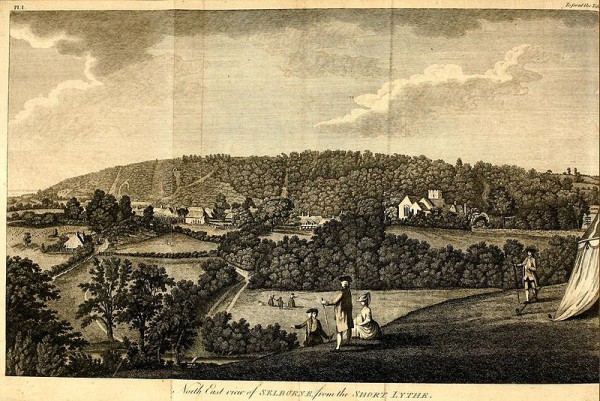 Foldout frontispiece, North East view of Selborne from the Short Lythe, of Gilbert White’s The Natural History and Antiquities of Selborne, 1789, drawn by Samuel Hieronymus Grimm.

On July 18, 1720, pioneering English naturalist and ornithologist Gilbert White was born. He is best known for his work Natural History and Antiquities of Selborne (1789), in which over the course of 20 years of his observations and two colleagues’ letters, he studied a wide range of flora and fauna seen around his hometown of Selborne, Hampshire. The Natural History and Antiquities of Selborne was adored by Charles Darwin, has been read by millions, and remains in print to this day, with over 300 editions.[9]

He grew up in his grandfather’s vicarage in Selborne (6 km south of Alton, Hampshire, in the South Downs north of what is now South Downs National Park), attended Holy Ghost School and received private tuition from a tutor in Basingstoke before studying at Oriel College, Oxford University. In 1746 he became a deacon and in 1749 he was ordained. He was then a pastor (curate) in Hampshire and Wiltshire, including four times in Selborne itself and, among other places, in the neighbouring parishes of Newton Valence and Farringdon (Hampshire). In the early 1750s, White was appointed Junior Proctor at Oxford as well as Dean of Oriel. After the death of his father in 1758, Gilbert White moved back into the family home at The Wakes in Selborne.

The Natural History and Antiquities of Selborne

The Natural History and Antiquities of Selborne was first published in 1789 by Gilbert White’s brother Benjamin. It was incredibly successful being continuously in print since then, with nearly 300 editions up to 2007. White kept a scientific diary for 25 years from 1768 to 1793 which formed the basis of his book. The work was compiled from a mixture of his letters to other naturalists including Thomas Pennant and Daines Barrington. The book further included phenology observations made by White and William Markwick of the first appearances in the year of different animals and plants, and observations of natural history organized more or less systematically by species and group.

The main part of the book, the Natural History, is presented as a compilation of 44 letters nominally to Thomas Pennant, a leading British zoologist of the day, and 66 letters to Daines Barrington, an English barrister and Fellow of the Royal Society. In these letters, White details the natural history of the area around his family home at the vicarage of Selborne in Hampshire. Many letters were probably written especially for the book. While the first part of the book comprises a sequence of letters in a diary-like structure, the second part is a calendar, organized by phenological event around the year. The third part of the work contains observations, organised by animal or plant group and species, with a section on meteorology. The illustrations in the first edition were painted by the Swiss artist Samuel Hieronymus Grimm, engraved by William Angus, Peter Mazell, and others.

White is regarded by many as England’s first ecologist, and one of those who shaped the modern attitude of respect for nature. He said of the earthworm:

“Earthworms, though in appearance a small and despicable link in the chain of nature, yet, if lost, would make a lamentable chasm. […] worms seem to be the great promoters of vegetation, which would proceed but lamely without them…”

The later naturalist Charles Darwin, when asked in 1870 about books that had deeply impressed him in his youth, mentioned White’s writings. It has been argued that Darwin might not have propounded the theory of evolution without White’s pioneering fieldwork establishing the importance of close observation. Rather than studying dead specimens, White observed live birds and animals in their own habitats over many years; creating a ‘new kind of zoology, scientific, precise and based on the steady accumulation of detail’.

The Natural History and Antiquities of Selborne became the fourth-most published book in the English language after the Bible, the works of Shakespeare,[5] and John Bunyan‘s The Pilgrim’s Progress.[4] The White family house in Selborne, The Wakes, now contains the Gilbert White Museum. Gilbert White’s 1783–84 diary corroborates the dramatic climatic impacts of the volcanic ‘Laki haze‘ that spread from Iceland with lethal consequences across Europe. White’s sister Anne was married to Thomas Barker (1722–1809), referred to as ‘The father of meteorology‘, and Gilbert maintained a correspondence with his nephew Samuel Barker, who also kept a naturalist’s journal.