You are here: Home › space › The Apollo-Soyuz Test Project 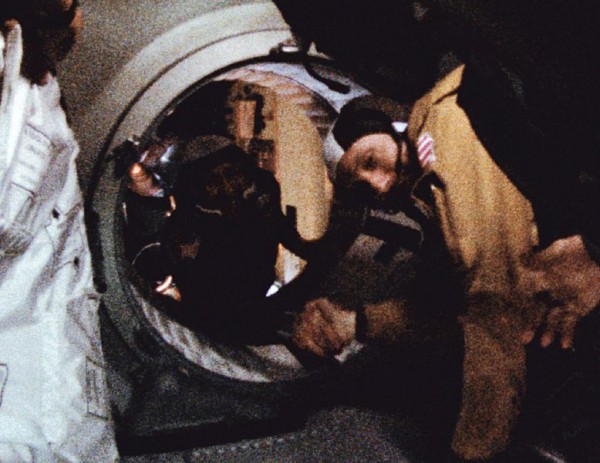 On July 17, 1975, the US-American Apollo Command/Service Module docked with the Soviet Soyuz 19 in the course of the Apollo–Soyuz Test Project, the first joint U.S.–Soviet space flight, as a symbol of the policy of détente that the two superpowers were pursuing at the time.

Due to the tense relations between the United States and the Soviet Union, space cooperation between both countries was quite unlikely in the early 1970s. Next to the tense political situation, both sides had severe criticisms of the other side’s engineering. Soviet spacecraft were designed with automation in mind; the Lunokhod 1 and Luna 16 were both unmanned probes, and each Soyuz spacecraft had been designed to minimize risk due to human error by having fewer manual controls with which human operators would have to contend during flight. By contrast, the Apollo spacecraft was designed to be operated by humans and required highly trained astronauts in order to operate. The Soviet Union accused the Apollo spacecraft of being “extremely complex and dangerous”. Still first meetings concerning a possible docking of American and Soviet spacecraft took place in 1971.

The Soyuz and Apollo flights launched within seven-and-a-half hours of each other on July 15, and docked on July 17. Three hours later, the two mission commanders, Stafford and Leonov, exchanged the first international handshake in space through the open hatch of the Soyuz. While the two ships were docked, the three Americans and two Soviets conducted joint scientific experiments, exchanged flags and gifts, signed certificates, visited each other’s ships, ate together, and conversed in each other’s languages. There were also docking and redocking maneuvers, during which the two spacecraft reversed roles and the Soyuz became the “active” ship. American scientists developed four of the experiments performed during the mission. Embryologist Jane Oppenheimer analyzed the effects of weightlessness on fish eggs at various stages of development. After 44 hours together, the two ships separated, and maneuvered to use the Apollo to create an artificial solar eclipse to allow the crew of the Soyuz to take photographs of the solar corona. Another brief docking was made before the ships went their separate ways. The Soviets remained in space for five days, and the Americans for nine, during which the Apollo crew also conducted Earth observation experiments. 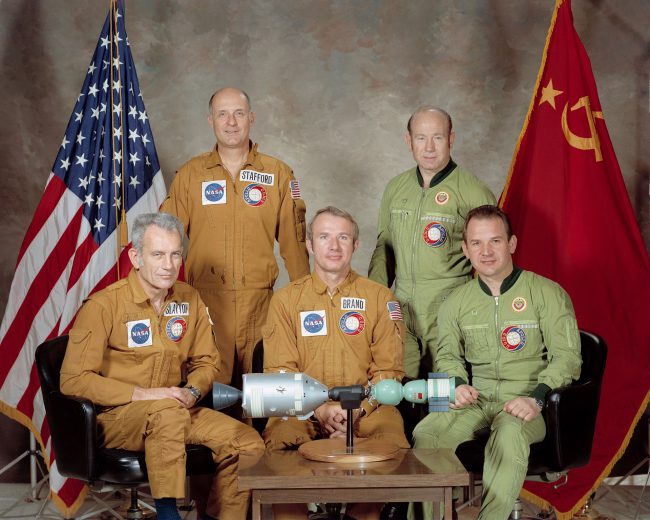 S75-22410 (March 1975) — These five men compose the two prime crews of the first-ever two-nation cooperative space mission, known in the US as the Apollo-Soyuz Test Project (ASTP) and in the Soviet Union as the Soyuz-Apollo Experimental Flight

It was the last flight of an Apollo spacecraft and the launch vehicle Saturn IB. At the same time, until the Dragon COTS1 mission in 2010, it was also the last US spacecraft to parachute. From the US perspective, the ASTP thus concluded the era of manned space flight with missiles. This was followed by a period of six years, during which there were no manned American space flights, until the space shuttle went into operation in 1981. Twenty years later, the Shuttle-Mir program was underway, but by that time the USSR had collapsed.

The Flight of Apollo-Soyuz: 40th Anniversary, [5]