You are here: Home › chemistry › Frank Spedding and the Rare Earth Elements 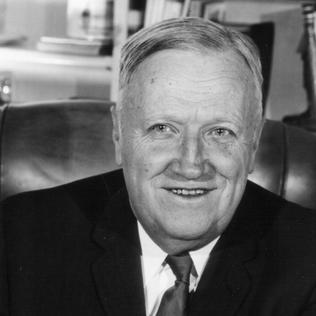 On October 22, 1902, Canadian American chemist Frank Spedding was born. Spedding was a renowned expert on rare earth elements, and on extraction of metals from minerals. His uranium extraction process helped make it possible for the Manhattan Project to build the first atomic bombs.

Spedding was born in Hamilton, Ontario, Canada, the son of Howard Leslie Spedding and Mary Ann Elizabeth Marshall. In 1918, the family moved to Ann Arbor, Michigan, where his father worked as a photographer. Frank Spedding attended the University of Michigan and earned his Master of Science degree specializing in analytical chemistry later on. Already as an an undergraduate, Spedding took issue with the prevailing explanation by Friedrich August Kekulé [4] of how the six carbon atoms in benzene hold together and proposed an alternate explanation. In 1929, he earned his doctorate degree with a thesis on “Line absorption spectra in solids at low temperatures in the visible and ultraviolet regions of the spectrum” which was published in Physical Review.

In order to continue his reseach on the spectra of solids, Spedding received a National Research Fellowship. During the mid-1930s he worked for Gilbert Lewis as a chemistry instructor and became interested in the research field dealing with rare earths. Even though the materials were hard to find at the time, Spedding managed to acquire Europium and Samarium during a stay in Chicago. In 1934, he was awarded a Guggenheim Fellowship that allowed Spedding to study in Europe. The scientist and his wife traveled to Europe by heading westward across the Pacific, intending to study in Germany under James Franck and Francis Simon. However, due to the rise of Adolf Hitler in Germany both fled and the couple instead went to the Cavendish Laboratory at the University of Cambridge in England. There, Frank Spedding worked with John Lennard-Jones, and attended lectures given by Max Born. He further visited Niels Bohr in Copenhagen, and gave a lecture in Leningrad.[5]

The United States entered World War II in 1942. When the Manhattan Project was established, Arthur H. Compton established its Metallurgical Laboratory with the goal to build nuclear reactors to create plutonium that would be used in atomic bombs. Upon recommendation by Herbert McCoy, Frank Spedding was asked to become the head of the Metallurgical Laboratory’s Chemistry Division. Part of the Chemistry Division was established at Iowa State College in Ames.

After the War, Frank Spedding founded the Institute for Atomic Research and the Ames Laboratory of the Atomic Energy Commission. Spedding became the director of the Ames Laboratory and he was “universally acknowledged as one of the world’s foremost experts on the identification and separation of rare earths“. Spedding developed an ion exchange method of separating and purifying rare earth elements using ion exchange resins. He later used ion exchange to separate isotopes of individual elements, including hundreds of grams of almost pure nitrogen-15.

Under his supervision, about 88 students received their Ph.D. degree and Spedding managed to publish over 260 peer-reviewed papers during his career.  Spedding retired in 1972 and authored 60 books afterwards. He died suddenly on 15 December 1984.