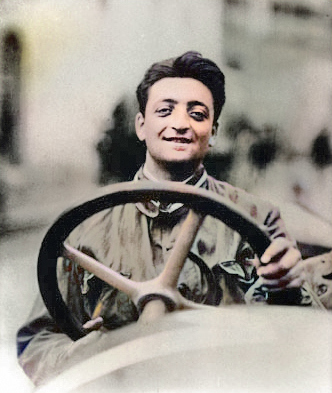 On February 18, 1898, Italian motor racing driver and entrepreneur Enzo Ferrari was born. He is best known as the founder of the Scuderia Ferrari Grand Prix motor racing team, and subsequently of the Ferrari automobile marque. He was widely known as “il Commendatore” or “il Drake”.

Enzo Ferrari was born in Modena, Italy. It is believed that he had his first significant encounter with race cars in 1908 when he witnessed the famous Italian racecar driver Felice Nazzaro win the Circuit di Bologna. This event is supposed to have influenced Ferrari so much that he decided to become a racing driver himself. However, as World War I started, he was assigned to the third Alpine Artillery division of the Italian Army. Unfortunately, his father and his older brother died in 1916 after suffering from a large flu outbreak in Italy. Enzo Ferrari became sick as well and was discharged from service in 1918.

After the War, Ferrari’s family carpentry business collapsed and he began searching a career in the car industry. First, he settled for a job with the car manufacturer Costruzioni Meccaniche Nazionali as a test-driver. Ferrari made his competitive debut in the 1919 Parma-Poggio di Berceto hillclimb race and in the same year he took part in the Targa Florio. One year later, Enzo Ferrari left C.M.N. in order to race for Alfa Romeo.

In 1923, Ferrari received the Prancing Horse badge. It once decorated the fuselage of his former army buddy Francesco Baracca‘s SPAD S.XIII fighter. After Baracca’s death in 1918, the badge was taken from the wreckage of the plane and Ferrari later displayed the famous badge on his cars when he founded his own racing team. He founded Scuderia Ferrari in 1932 and after some difficulties to compete with Auto Union and Mercedes in the beginning, Ferrari’s team achieved a notable victory in 1935 when Tazio Nuvolari beat Rudolf Caracciola and Bernd Rosemeyer on their home turf at the German Grand Prix. Ferrari manufactured two cars for the 1940 Mille Miglia.

However, Ferrari’s factory was forced to participate in the war production for Mussolini after the outbreak of World War II. He was forced to relocate his factory from Modena to Maranello after bomb attacks and began producing cars under the name Ferrari after World War II in 1947. In 1946, the now independent Scuderia Ferrari constructed its own racing car for the first time, with which it achieved its first victory the following year. Their debut took place one year later and Ferrari won his first Grand Prix with José Froilán González at Silverstone in 1951.  In the 1960s, some overseas races were omitted for cost reasons and finally, in the middle of the 1973 season, Ferrari temporarily suspended participation in Grand Prix races due to continued lack of success. Due to the withdrawal of the disqualification of James Hunt on McLaren at the Spanish Grand Prix shortly before, the Scuderia Ferrari also cancelled the participation in the Austrian Grand Prix in 1976. The Scuderia Ferrari is the most successful Formula 1 team in history with 15 drivers’ and 16 constructors’ championships. Also in the 1960s, Ferrari began to search for a partner and sold 50% of his company to FIAT, however, remaining 100% in control of the racing activities. Eventually, Ferrari stepped down as managing director of the road car division.

Since 1946/47, his company has also been producing high-performance road vehicles. Under the Dino brand, mainly road cars with V6 engines were built (Dino 206 GT and GTS, Dino 246 GT and GTS as well as Dino 208 GT4 and 308 GT4 in three different body specifications). Dino was the nickname of Enzo Ferrari’s first born son Alfredo Ferrari. He died of muscular dystrophy on 30 June 1956. A racing car was later named after him. The type designation was revived in the mid-1960s, when the first six-cylinder sports cars were built by Ferrari in cooperation with Fiat due to sports laws. For the homologation of the engine for Formula 2, 2000 engines had to be installed in production cars and Ferrari could not achieve this number without a partner. So it turned out that this engine was used in Ferrari’s Dino and in the Fiat Dino. Also in the Lancia Stratos the engine was used. 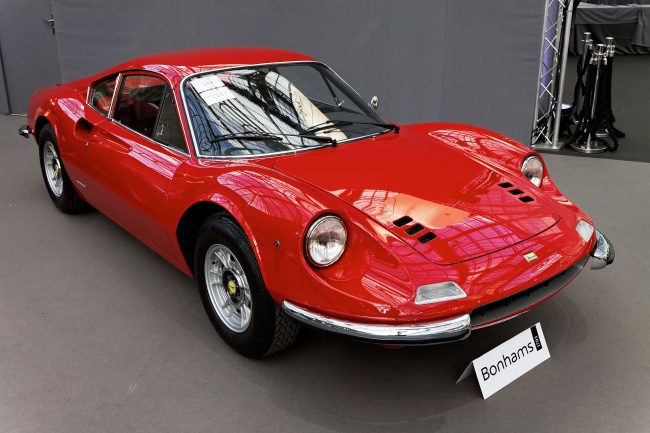 In his final years Ferrari was often simply referred to as “l’Ingegnere” (the Engineer) or “il Grande Vecchio (the Great Old Man)”. Ferrari’s management style was autocratic and he was known to pit drivers against each other in the hope of improving their performance. Some critics believe that Ferrari deliberately increased psychological pressure on his drivers, encouraging intra-team rivalries and fostering an atmosphere of intense competition for the position of number one driver. Enzo Ferrari spent a reserved life, and rarely granted interviews. He rarely left Modena and Maranello, except for when the annual Italian Grand Prix at Monza just outside Milan took place. Made a Cavaliere del Lavoro in 1952, to add to his honours of Cavaliere and Commendatore in the 1920s, Ferrari also received a number of honorary degrees, the Hammarskjöld Prize in 1962, the Columbus Prize in 1965, and the De Gasperi Award in 1987.